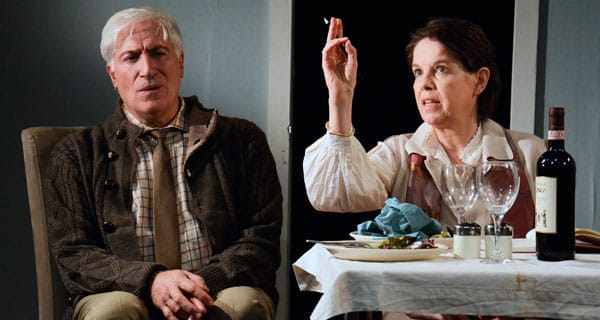 In Ivy & Joan, playwright James Hogan gives us two portraits of lonely women who sit and talk as they prepare for a new phase of their lives. In the 1980s, Ivy is about to leave the hotel where she has worked and lived for 40 years. In the present day, Joan is having a final meal with her unhappy husband who is sending her to a psychiatric hospital.

These two thematically linked one-act plays have returned to Jermyn Street Theatre in a new production directed by Anthony Biggs, with both women again played by Lynne Miller.

She gives strong, assured performances in both roles although my favourite is Ivy, sour and disappointed after being sacked for insubordination by the new bosses of the hotel. With unwavering faith, she still clings to the hope that a former colleague and would-be boyfriend will return after many years to marry her. In her last half hour before catching a bus to stay with her friend Inky in Manchester, she bitches, dreams and bemoans her lot to distract herself from her unhappiness, intermittently listened to by bartender Vic, played by Jack Klaff. The sadness of her story is balanced by some funny lines which, due to the focus on one talking head, inevitably draws comparisons with Alan Bennett.

Joan’s story is darker and more unsettling, this time with Jack Klaff as husband Eric who is unable to understand and deal with his wife’s mental illness. They have just returned from a holiday to Venice where Joan has been overwhelmed by the city’s sights and sensations as well as the attentions of an ageing gigolo called Signore Dottore Marcello di Eduardo.

At first, her romantic excitement about Venice and her desire to write about it in poetry are a touching contrast to her pompous, pedantic husband who seems exasperated by everything she says. However, it slowly becomes apparent – at least as far as Eric is concerned – that her exuberance is part of a longer-term pattern of delusion and mental health problems.

For both Joan and Ivy, their lives are about to change, even if they themselves cannot, but James Hogan leaves us with little hope that it will be a change for the better.