Our TheatreCat Libby Purves reviews Hugh Salmon’s play Into Battle now having its World Premiere at the Greenwich Theatre. 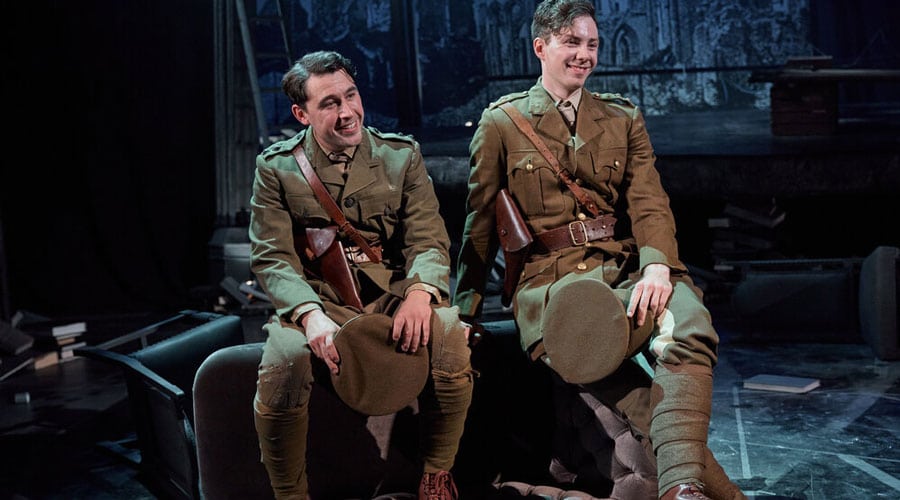 An old story of young men.

Balliol College Oxford, 1910. Confident young Etonians are hurling crockery downstairs, yelling “I’m a bastard, I’m a bastard, rather be a bastard than a Trinity man” and making war on Keith, the socially-conscious Northern scholar who runs a  boys’ club for hungry kids with striker fathers. The Junior Dean, anxious Rev.Neville, daren’t send the ringleader Billy Grenfell down because his rich parents dine with Asquith, his elder brother Julian is a college hero currently off with depression and a dangerous bout of social liberalism, and their father Lord Desborough is a national hero of sport, climbing, Channel-swimming, etc. 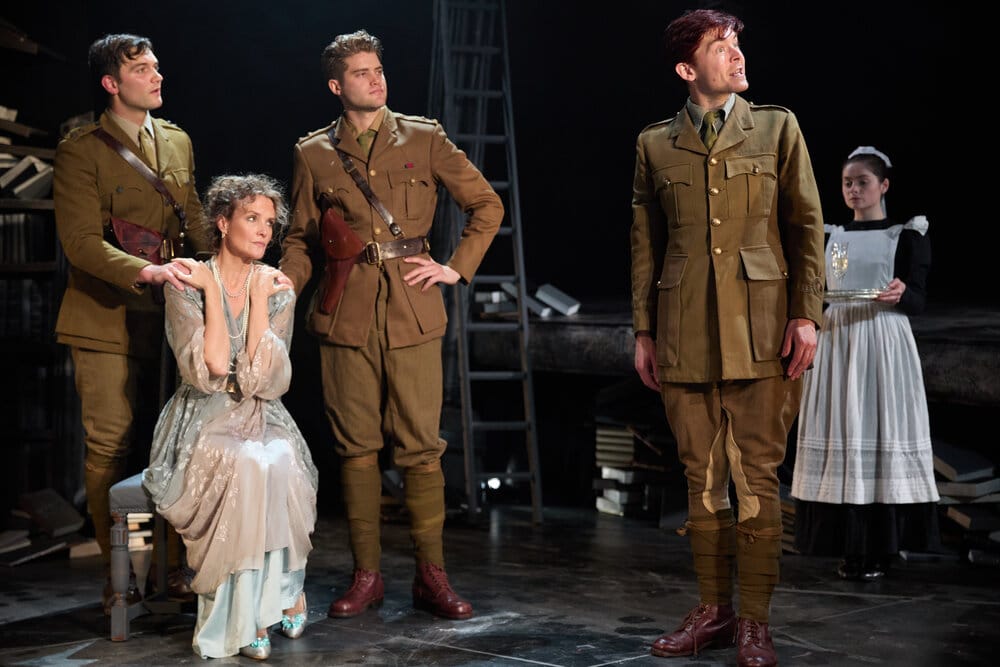 Billy, blithely throwing Keith’s possessions and desk out of a third-floor window, explains “I can do what I like because lane I can pay”. His famously rich and beautiful mother is vampily cougaring red-haired student Patrick, but takes a moment off to bribe Keith not to press charges for assault against Billy by giving the Boys’Club a building.

It’s a mischievously brilliant moment for a history-play about horrible entitled Etonian louts in an Oxford dining club, who torment animals for fun in the quad and bait Northern plebs. Not to mention a good time for the young Churchill in voiceover to say, as he did :
‘The greatest danger to the British people is not among the enormous fleets and armies of Europe. No. It is here in our midst, close at home, close at hand, in the unnatural gap between rich and poor’. 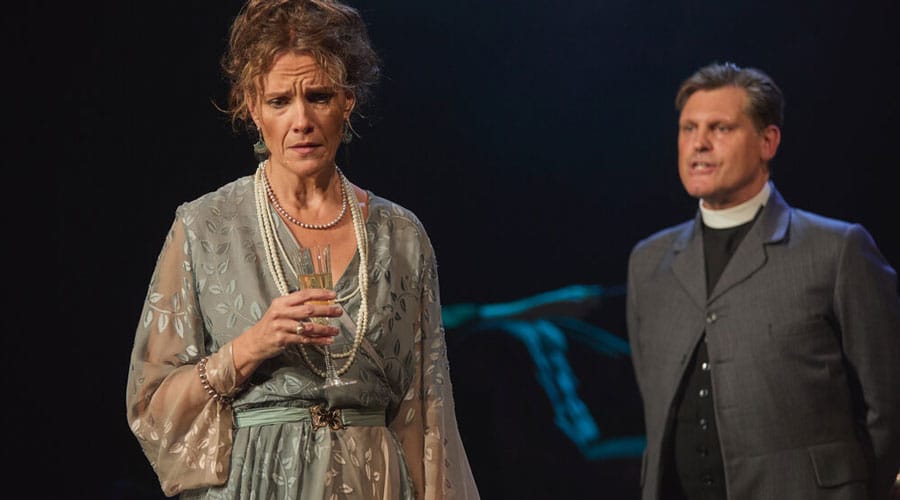 But this isn’t the Royal Court or hysterical Buller-beating exaggeration like Posh. It’s a debut play by Hugh Salmon, a former ad executive who researched it in convalescence because his grandfather played rugby with one of the dining club set, the great international Ronald Poulton-Palmer, who is one of the Etonians though the least toxic.

And the century-old story of these real young men is worth telling, because within a few years all of them were in the trenches,  side by side,  alongside teenage Tommies from boys’ clubs. They died together, and it is not beyond imagination that before that they understood the absurdity of earlier attitudes. 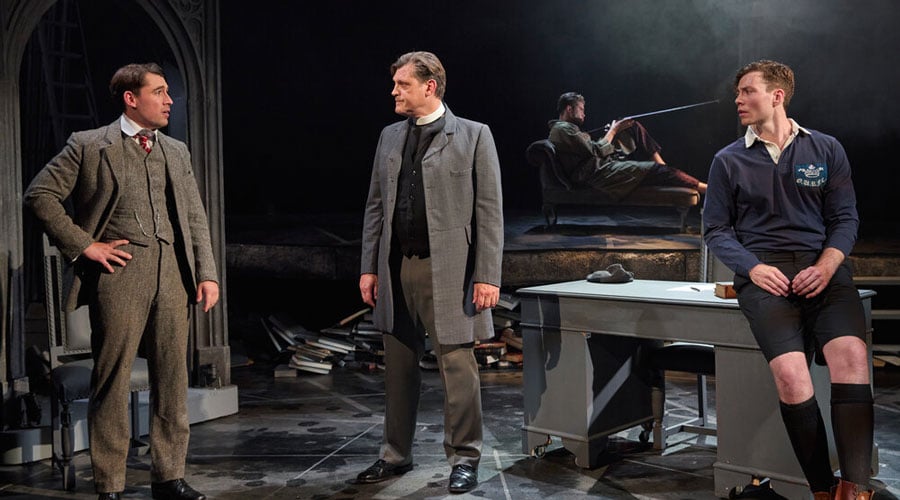 The story is imaginatively told against a set of ragged gothic arches and scattered books, both the larking and the final wartime moments vivid and brilliantly staged by director Ellie Jones and Steve Kirkham. Only Neville, the longsuffering college Dean and decorated wartime padre (beautifully played by Iain Fletcher, the eternal anguished peacemaker) survived the war.  Julian died of his wounds, old enemies Keith Rae and Billy Grenfell fell the same day in 1915, as did Ronnie Poulton who had tried hard to curb the Etonian vandals at college. Patrick Shaw Stewart died in the Dardanelles, his last letter to friends full of self-deprecating fun.  Alexander Knox is a delight in the part, as is Nikolas Salmon as the burly, initially awful but finally gallant Billy; Molly Gaisford gives Lady Desborough a nice acid upper-class edge, though burdened with far too long a death scene over Julian.  Joe Gill is a solid decent Rae who conveys both his social indignation and the fact that like all of them, at college he is still a kid. And Anna Bradley, on a professional debut fresh out of drama school,  niftily doubles with glee as an urchin turned Tommy and a housemaid entangled with Billy. 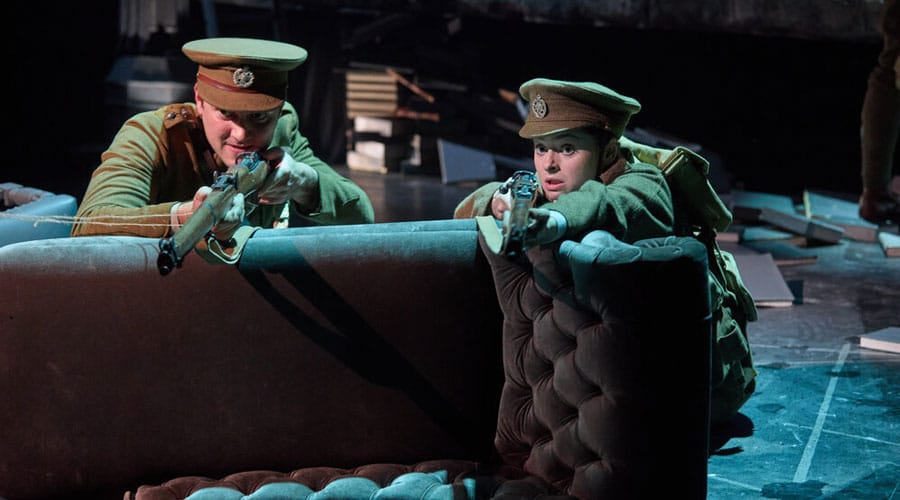 It’s a play that could do with a bit of finessing still, but it has a proper, thoughtful historical sense (the sources in the programme are plentiful and fascinating). and I hope it lives on, a reminder that the most toxic youthful masculinity might turn to self-forgetful heroism. Makes you remember some of the have-a-go heroes in recent terrorist attacks. Julian’s Grenfell war poem with the romantic heroics of his generation, gives the play its title and its ending:

“The thundering line of battle stands,
And in the air Death moans and sings;
But Day shall clasp him with strong hands,
And Night shall fold him in soft wings”

Until 31 October 2021 at Greenwich Theatre