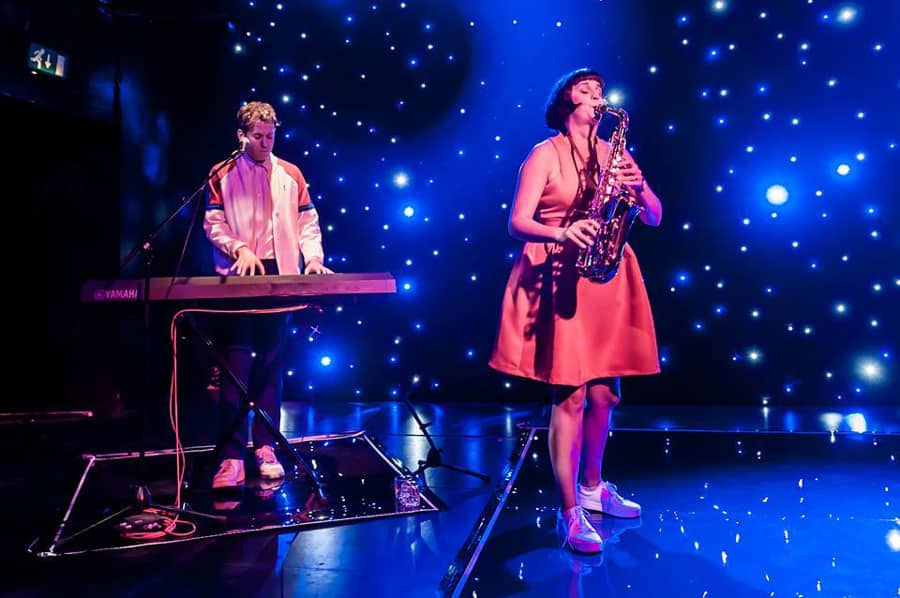 I Have A Bad Feeling About This
Vaults Festival,
22nd February 2018
5 Stars

What a joy it is to discover such a pleasant, pretty and pertinent pair of talents as those of Mr Harry Blake and Ms Alice Keedwell, especially when showcased in such a beautiful presentation as this delightful ‘comedy musical’, debuted last week at The Vaults’ most recent Festival, in a gorgeous staging by Valentina Ceschi (co-creator of the show), with design consultancy by Emma Bailey, and fabulous lighting by Richard Williamson, and a dash of snappy choreography by Jennifer Fletcher.

It’s a packed and very rewarding experience.  The opening number, ‘In Berkhamsted’, is a clever, not to say urbane riposte to the banalities of suburban living, acutely zeroing in on the show’s principle target.  But this is a love-hate relationship, with Alice togged out to look like some 21st century answer to The Stepford Wives, all eager grin and hairspray-frozen raven-toned coiffure and what seems to be a carmine red PVC party frock.  She is locked, almost, into a box drawn in thin, pulsing, flashing lights on the floor of the black box setting, while, far behind her, the stars twinkle and look down impassively on the meaningless cavortings of self-important humanity.  Ah, yes.  There is an agenda being ground here.  Audibly.  The lyrics, written by Alice, are witty, rather like Betjeman meets Fascinating Aida meet Mapp and Lucia.  Her voice strives forward, oozing positivity, while he stands, all sullen Chris Lowe impassivity, and deadpan Neil Tennant delivery, pitching his mordant commentary into the ring.  He is the one who constantly has a ‘bad feeling about this’.  Alice has moved to the shires.  Just.  And is trying to establish herself in a new life, aiming to get up at 7, and hating herself for rising only at 10, and regretting that she is not amongst all her neighbours who are ‘achieving things’.

Alice presses on, however.  Optimism incarnate.  Her second number, a kind of D minor czardas, ‘Our Local Pub’, is full of Leslie Bricusse zest (‘It’s amazing!’), and sounds like Barbara Pym filtered through Kathy Lette.  This describes her next move: making friends.  Her approach is nothing if not direct.  The charm of the show is that her semi-crazed obsessiveness is not punished by social ostracism: far from it, she is richly rewarded by the good people of Hertfordshire, who keep encouraging her.  And, interestingly, she casts us, the audience, in the role of all her supporting characters, even getting one game individual to take on the one speaking part of ‘Sarah’ (with lines printed neatly on big cards for her to read).  So, on she goes.  ‘I Can Do this’ is a stentorian hymn to her determination.  She hosts a party: the inaugural meeting of her initiative – a ‘supper club’.  Blake pours scorn over all her endeavours from his busy keyboard.  Undeterred, Alice marches onward. 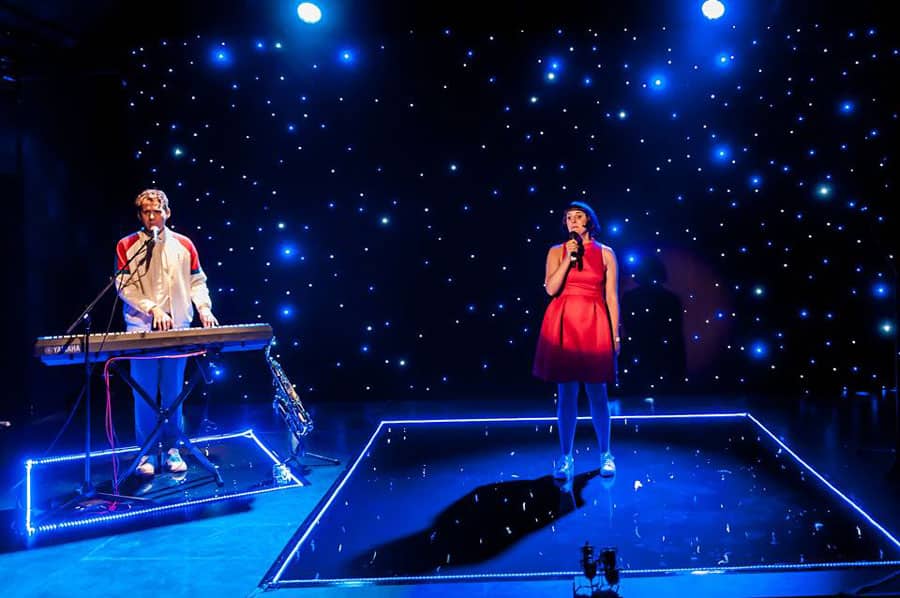 ‘Thanks So Much For Coming’ is a terrific set-piece: accompanied by a glittering light show.  It seems the high point of the show, as Alice recounts the disastrous consequences of her ill-fated entry to Berkhamsted society.  Everything that can go wrong, does.  She is disconsolate.  ‘Alice, You Twat’ is her siren torch song, a really beautiful number that makes the audience, us, catch our breath and pause to reflect upon the tender-hearted human trapped inside this monster of social aspiration, the feeling creature buried alive within the calculating robot of ambition.  It is perhaps the only flaw in the whole show that it segues into yet another ballad, ‘Maybe I Need Someone To Talk To’, thereby robbing the number of its thoroughly well earned effect.  I’m sure that is something the show’s creators will remedy in short order.  Fortunately, it doesn’t linger.

A surprise pick-me-up arrives after the debacle, where the spirit of almost Dickensian charitableness smiles indulgently upon Alice’s failings, and allows her to rejoin the ranks of the comfortable and cultivated.  A rousing finale closes the show, with enthusiastic audience participation: ‘There’s Not A Magic Happy Ending’, the words to which were found printed on sheets lying around the auditorium at the start of the event: now, at last, we get to use them.  What we are not prepared for, though, is the taxing nature of the tune we have to sing: we all have to listen to it, and each other, very carefully in order to get through it.  What a marvelously bonding experience!  And how thrillingly satisfying to get to a big, multi-harmony cadence to the final chorus: art really has healed the wounds of life.  And we may now go home, feeling better than we did when we left.

Now, you can’t say fairer than that, can you?

VISIT THE HOUSE OF BLAKEWELL