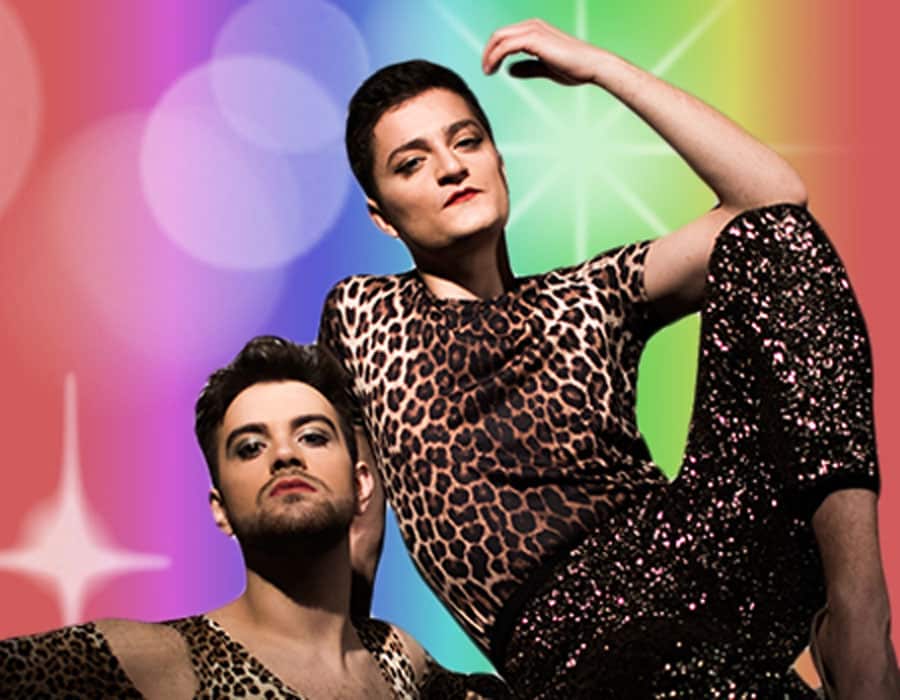 There cannot be many British musical writing teams in their early twenties who have had two shows running in the West End in the same week, but this is what Toby Marlow and Lucy Moss have achieved.  Their stunning new work, ‘Six‘, played its last London date (for the time being) this Monday at The Arts, immediately followed by another outing for the show they created with collaborator (and Marlow’s co-performer here) Zak Ghazi-Torbati: a deliciously smart and stylish revue visiting Piccadilly for a couple of performances.  Both productions were seen at Edinburgh, where they wowed crowds last season, and this one was most recently paraded at the Drayton Arms in South Ken in November.  If anybody is in any doubt about the power and potential of these terrific new voices, they won’t be for long.

So, resplendent in hot pants and leopard print tops , the boys seized control of the space from the off, mingling with the audience and whipping up a club-like level of excitement.  By the time Moss – doing the tech – brought the house lights down and focussed attention on the lads, we were wholly in their thrall.  They then sped us through a packed 75 or so minutes of niftily constructed songs and sketches, ostensibly based upon their own histories, although possibly heavily embroidered and embellished with self-dramatisation and cheekily apocryphal fantasy. 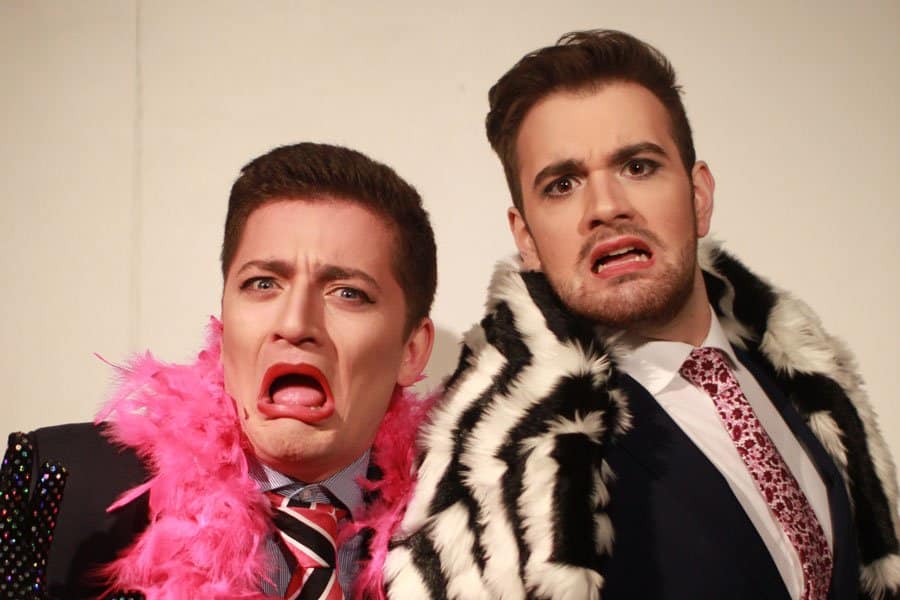 The show is emphatically pitched towards a mainly young and eager-to-be-pleased, hip crowd.  But, right from the opening synth-pop revival, ‘Welcome Aboard’, a perfect Stock, Aitken and Waterman pastiche, it is evident that their artistic roots go deep into the nightclub netherworld of thirty years ago, thus drawing in older audiences too, and creating a pleasing cross-generational bond.  Music is provided by a mixture of playback tapes, a hastily erected electric keyboard and the Coqs’ resident grand piano, at which Marlow often sits and vamps and camps it up, not least in the terrific, ‘I Couldn’t Get It Up’.  Ghazi-Torbati’s chief musical weapon is his thrilling voice: the tenor register ringing out his partly Welsh background, and a fabulous contralto falsetto for, um, female parts, like his magnificently operatic rendition of Toby’s Mum.

The pair get through quite a lot of roles, leap-frogging their way from one childhood story to another: moments of social and sexual awakening, mixing clap-a-long-a-sing-song melodic infectiousness with razor sharp, witty lyrics, like as not brought to vibrant life on stage with Moss’s spot-on Beyonceography (I mean, what other word for it is there?) – the podium is adorned by not one but two life-size cardboard cut outs of the lifestyle icon, until they too get in on the act and go body-surfing through the delirious throng.  It’s all very daft and silly, but impeccably well done, including some smashingly successful hijacking of punters, who seem only too willing to throw in their lot with these guys, gladly taking on roles in their revisited youthful psychodramas, gleefully saying the lines they’re fed and even rising to smoothly executed dance moves.

And the show is also straight-friendly, or – at least – straight-aware.  At one point, the boys take on their hetero uni peers, and have some fun gently sending them up.  We all know they could find darker stories here to mine, if they wished to, but the intention always seems to be to keep things light.  Arguably, that is an area where the writing might usefully go further.  There are a couple of really beautiful ballad moments in this show, but they get pushed into the relentlessly hi-energy hysteria, tilting the effect always in the direction of briskly confidant, out, gay and proud self-validation.  That’s fair enough, but I think the audience is probably ready to open their hearts to these guys further than that.  In ‘Six’ there is much more emotional risk-taking, and perhaps we will see more of that as they move forward.

As a tasty confection, what they have to offer is hard to beat.  You get to the end of it longing for more and are secretly delighted to have discovered a new addiction.  I can’t wait for the next helping and I believe more is coming.  Let it be soon!