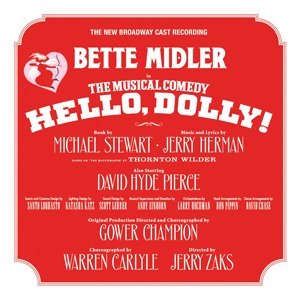 As soon as it was announced that the role of Dolly Levi would be played by the one and only Bette Midler, lovers of classic Broadway musicals were rushing out to get their tickets ensuring that this would be the revival to beat this season. Indeed, on Sunday at the Tony Awards, it took home four awards including Best Revival and Best Actress in A Musical and listening to this fabulous cast album it’s easy to understand why!

There’s something about a Jerry Herman score, that unmistakeable magic, the ability to translate character, comedy and that special feel-good something through music and lyrics and Hello Dolly! is no exception. Based on Thornton Wilder’s play The Matchmaker, Dolly Levi is a role that has been  played by some of the greatest including Carol Channing, Pearl Bailey, Danny La Rue, Mary Martin and Barbra Streisand amongst others. I’ve not seen the show but based on this recording Dolly Levi seems a role that Bette Midler was born to play.

From the opening number I Put My Hand In Here to Dolly’s 11 o’clock number So Long Dearie, Midler’s performance as the meddling Levi is one to be savoured. Vocally it’s brassy and as full of character as this recording needs to sell this iconic Broadway character.

This Hello Dolly! is also blessed with a superb cast with David Hyde Pierce as the blustery Horace Vandergelder, Gavin Creel as Cornelius Hackl, Kate Baldwin as Irene Molloy, Taylor Trensch as Barnaby Tucker, Beanie Feldstein as Minnie Fay and Will Burton as Ambrose Kemper. Herman’s score features some of his best songs and this cast make those songs shine and sparkle. Listening to Baldwin’s Ribbon’s Down My Back, and the Baldwin, Trensch, Feldstein and Creel performing Elegance are a highlight of this recording.

Penny In My Pocket, a song cut from the original production and performed with regularity by Michael Feinstein in concerts has found its way back into the production and it’s delivered with panache by David Hyde Pierce. Again, without having seen the show, the song fits perfectly and gives us insight into Horace’s back story.

This new recording of Hello Dolly! is certain to remain one of my favourites long after the current Broadway season concludes. It’s a stunning recording that now has me wondering whether Scott Rudin could work his producersorial magic on Mame!

PURCHASE A COPY OF HELLO DOLLY! FROM AMAZON