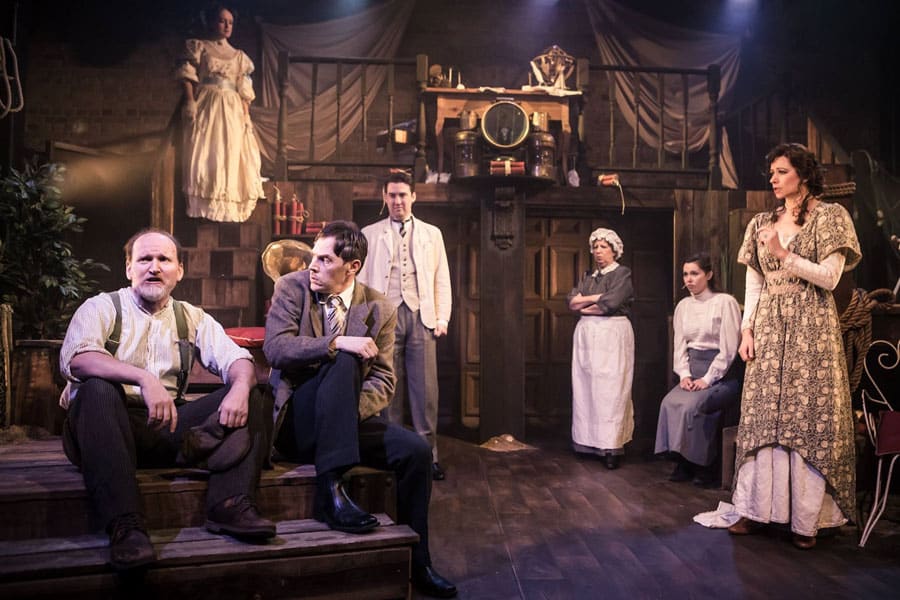 Of all the plays George Bernard Shaw wrote, one certainly found its place in the hearts and minds of the Soviets: this one.  It’s not hard to see why.  Much in the manner of Bulgarkov, and Chekov before him, in this simple story of a country house gathering of representative types around the time of the outbreak of the Great War (although written just after its end), Shaw shows up the enervated, spoilt, directionless ruling classes for what he thinks they are, and then exposes them to a thundering reckoning, as his carefully organised take on historical inevitability catches up with them.  We see their fantasy world collapsing into ruins and thoroughly enjoy the spectacle of its destruction, just like going to see some old disaster epic at Drury Lane.  And in this production by the Phil Willmott Company – who are now getting to be old hands at the new Union space in Southwark – we get a classy package that displays all its splendid wares to best advantage.

Not that there’s a great deal in the frothy, light-hearted first half to prepare us for what is to come.  Justin Williams and Jonny Rust have gone to town on the design and serve up a magnificent ziggurat of levels, very much resembling the ship-like space demanded by the script, and dragging in as many seaside, rural, cultivated and patriotic references as possible.  There is even a cannon (although, disappointingly, we don’t get to see it fired).  Ben Jacobs lights it all to bring out as much depth and perspective as possible, and Philip Matejtschuk pumps out period and location sounds to solidfy our sense of the house’s reality, and Penn O’Gara’s fine costumes work the same trick. 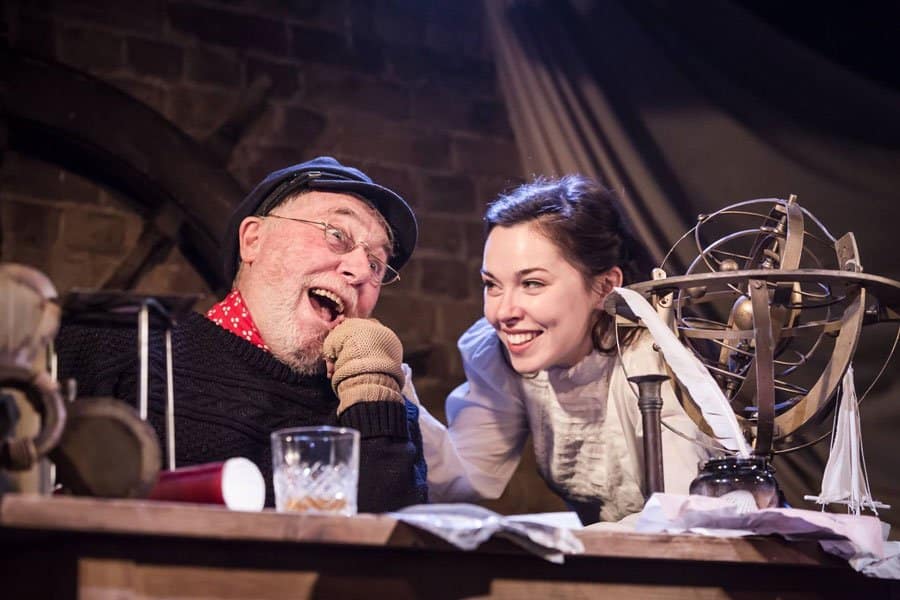 The same cannot quite be said for the performances in the first half.  Lianne Harvey is first onstage – in a delicious shaft of Jacobs light seen all too fleetingly – and she is perky and virginal as Ellie Dunn, while Alison Mead does an endearing turn as Nurse Guinness.  This is OK, as far as it goes, but when James Horne’s Captain Shotover appears, and the complications of Shaw’s deliberately arcane plot start to flood in, a sense of unease begins to grow.  Where is all this going?  Things just get more worrying with the arrival of other weekend visitors: Francesca Burgoyne’s furiously, terrifyingly energetic Lady Ariadne Utterword, resplendent in feathers and ruched satin; Toby Spearpoint’s pallidly tame Randall Utterword; the aptly named martial horror that is Mat Betteridge’s Hector Hushabye, a brash lothario, and his shockingly indifferent spouse, the daughter of the house, Helen Anker’s Hesione Hushabye.  There is also another couple of visitors, tagged somehow or other with Ellie: Ben Porter’s stiff but humane Mazzini Dunn, and J P Turner’s hopelessly out of place ‘trade’ intruder, Boss Mangan.  And there’s even a burglar, played as a coastal cockney, by Richard Harfst. 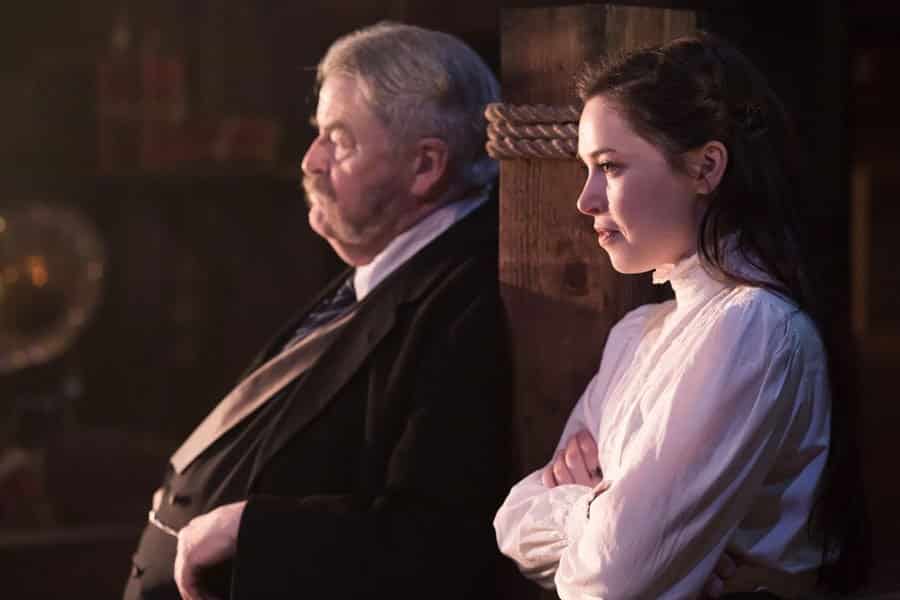 This collection of aptronyms probably signals the chief tendency of the script in the first part of the entertainment: to offer a chatty parade of archetypes.  And, with nothing more in the way of plot to work with, that is what they give us.  This is faithful to the intentions of the script, but lays bare all of Shaw’s in-built weaknesses: experiencing it is like eating a lot of icing, with no fruit underneath.  After a while, it becomes indigestibly sweet and superficial.  The audiene yearns for something plainer, and earthier.  Luckily, right at the very end of the first half, someone produces a gun and a ray of possibility bursts upon the stage.  However, after a long and rather pointless first half, you trot off to the bar at the interval without really being convinced anything of any consequence is going to emerge. 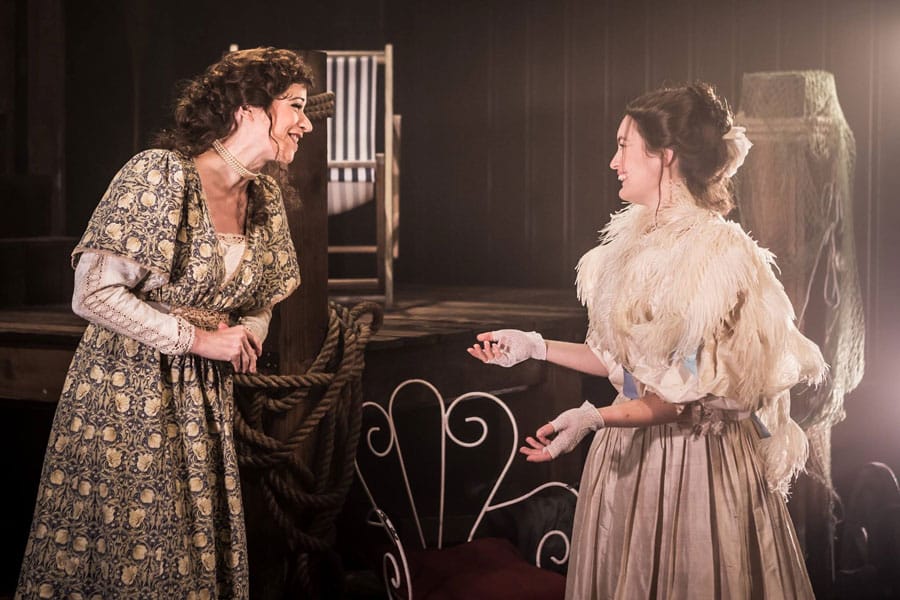 And how wrong you are.  The action resumes, as if without any break, and we are propelled into altogether far darker, and much more interesting, territory.  Suddenly, although the gun isn’t fired either (just as well, when so many bundles of dynamite lie strewn about the stage), the tiresome shallowness of these characters is blasted out of sight.  Now, they have to see themselves for what they are, and Shaw lets this process take its natural course, allowing things to happen, to unravel, to develop, organically.  At last, the stage is filled with real drama: one act of confession – or, more likely, exposure – follows another.  Burdened with the nasty inconveniences of The Truth, the characters simply lose their self-possession and suffer an awakening, finding themselves all cut adrift from each other, or unexpectedly thrown together with people they didn’t think they wanted, in this great big house, whose heart – in every sense of the word – has been truly broken.  All at once, we find ourselves in the same modern world as, say, ‘La regle du jeu’, and of all the decades since, right up to the present: surely, the destiny of the nation cannot be entrusted to people so completely unqualified to manage it effectively; or, if it is to be, then can they – or we – have any future at all?

Miraculously, in the second part of the play Shaw pulls the miracle of its rejuvenation from the idle debris of the first.  You don’t see this coming at all, which makes it such fun when it hits you.  And then, just as the characters lose the standing they claimed for themselves in the first half, they remarkably and unexpectedly attain far more appeal and likability than you would ever have suspected them of being capable of acquiring.  Shaw doesn’t exactly give us hope, but he paints a picture we can recognise as speaking to us today.  It’s a bit of a wait to get there, but more than worth persevering with.