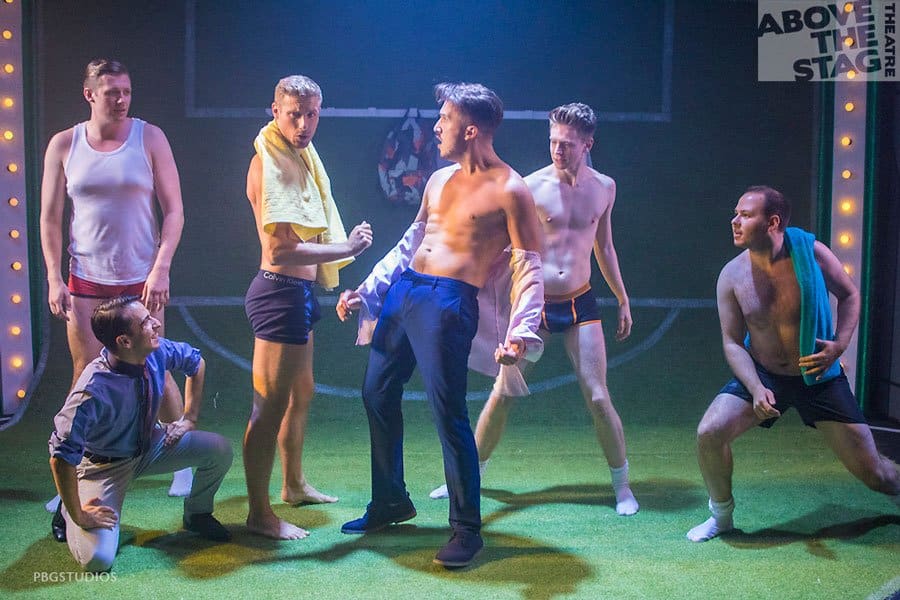 If there is one thing we have come to rely on Above The Stag to supply to us, it is high-quality homoerotic titillation with a chaser of moral uplift, and this show is no exception.  The established house panto writing team of Jon Bradfield and Martin Hooper have here been prevailed upon to devise a suitably festive summer entertainment set in the fascinating world of gay – and straight – amateur footie, an appropriate choice of milieu in which to locate an examination of contemporary mores around male sexuality, a mere 50 years since the partial decriminalisation of homosexuality among men in Great Britain. 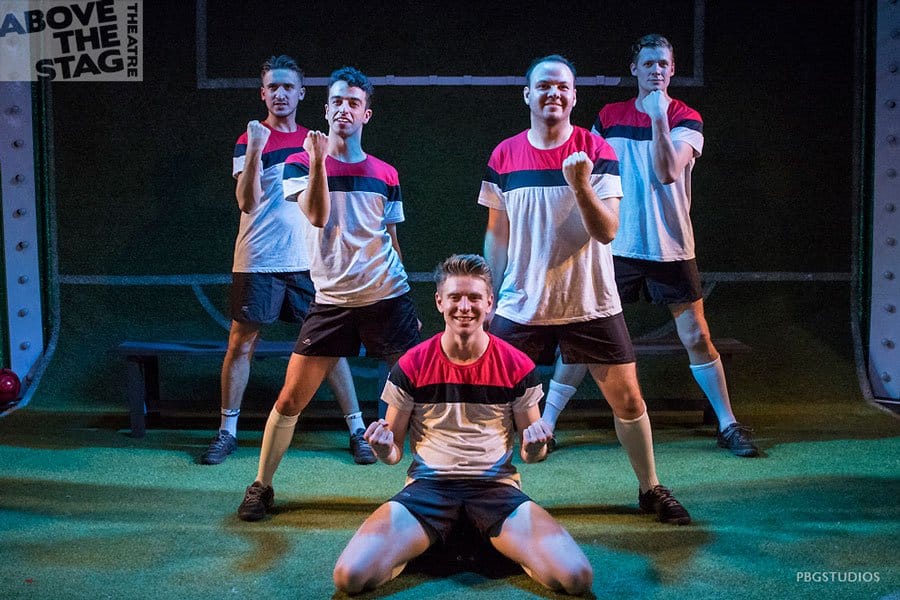 This house has assembled a capable ‘team’ to deliver the delightfully buoyant and pleasantly racy script by Bradfield and Hooper. Bradfield also writes a number of well crafted songs to admonish the tale and dignify it with the sub-title, ‘A musical with balls’… get the tone?… sufficiently ‘boom-boom!’ to locate this comedy in the mainstream of British humour.  Directed by the ever-fresh and near-resident guru Robert McWhir with fluency and some finesse, it is choreographed by an established collaborator of his, the industry stalwart Carole Todd, who here rejoices in having a cast wholly capable of executing some pretty nifty moves and exploits this boon for all its worth: between them, they ensure the stage positively bubbles with activity, making the rare moments of reflective repose all the more telling.  Mostly, they furnish an endearing showcase for a bunch of handsome young talent to strut their stuff. 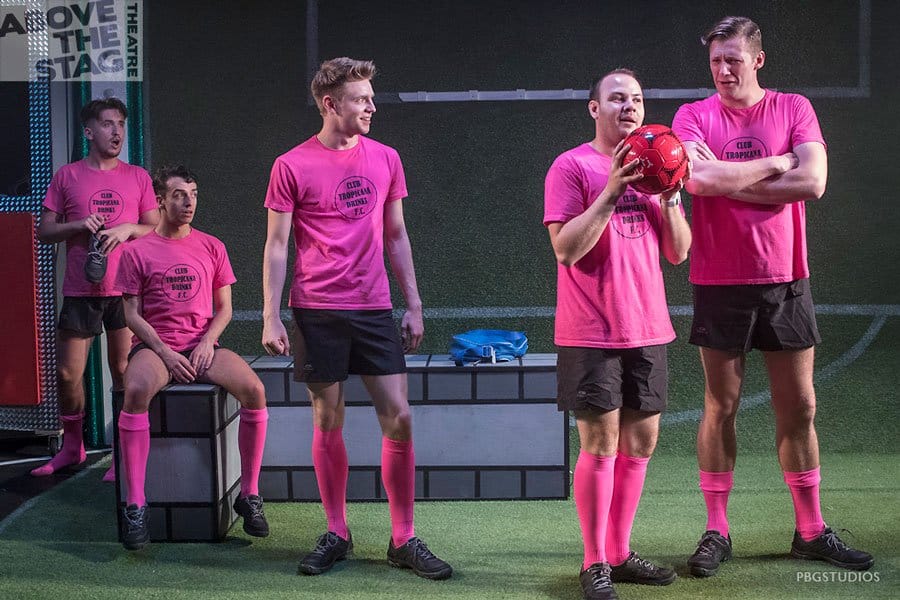 Of these, Jamie Barwood makes a likeable Joe, the centre-forward of this yarn, moving from the provinces up to the capital in pursuit of a new job, with his ex- and fellow keen footballer of Richard Watkins left behind on the bench in the sticks… until he resurfaces in one of the script’s many felicitous twists.  In London, muddling in the midfield is the queen of his new team, Duncan Burt’s Tayzr, who does everything camp but play in heels, with Harry Cooper-Millar’s Pete, Danny Couto’s Will and Tom Mann’s Liam making up the rest of the 5-a-side squad: in the best traditions of the fringe, the team has no understudies, thereby releasing Joey Goodwin and Andrew Cannon to take up a clutch of equally well drawn supporting roles, providing the plot with a constant supply of complication and unforeseen development. 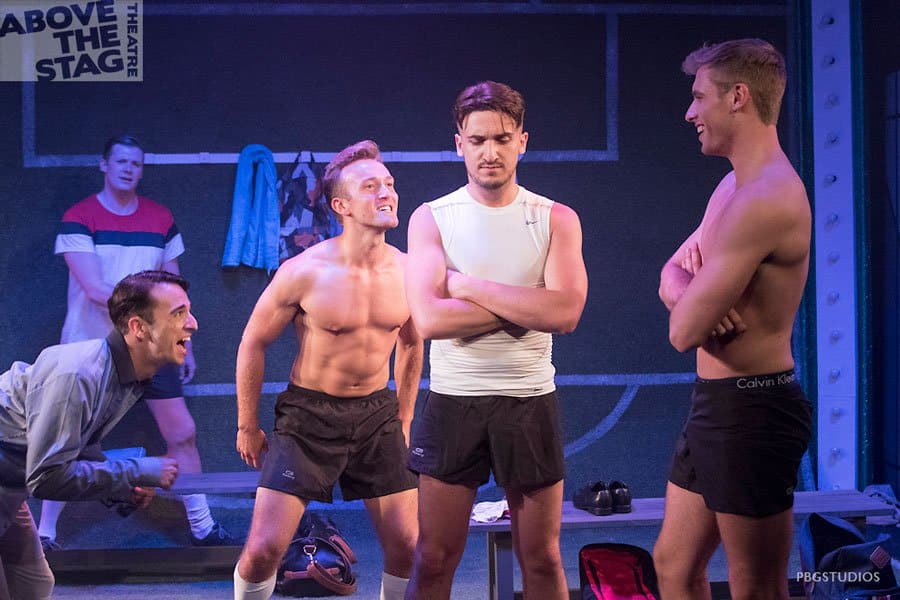 To present this, David Shields provides a simple but effective set – which, in a simplified way, perhaps recalls ‘Bend It Like Beckham’, and costumes that enhance the (mostly) impressive physiques on stage, while Jamie Platt lights everything to its best advantage, and house-protégé MD Simon David keeps the music bubbling from an occasionally playback tape-enhanced set of keys in the wings.  Bradfield’s songs are engagingly ‘pop’ in feel, well placed in the scenario, and anchored with some deft use of reprise and underscoring to lend further cohesion to the journey they help to present; while they may not stick in the mind much after hearing, they work wonders in lending a deeper emotional dimension to the experience of Hooper’s and his book, as it goes by.

And it is the bright, cheerful, optimistic humour of the script that lingers most as a reverberation of this tale of ordinary gay (and not) footballing blokes.  Add to this the fun atmosphere of the quirkily configured theatre – currently planning a move to much larger premises across the road from MI6 – and you have a very attractive package.  So, don’t just stare… go over there and say hello.  You never know where it might lead.

BOOK TICKETS FOR HE SHOOTS, HE SCORES AT ABOVE THE STAG