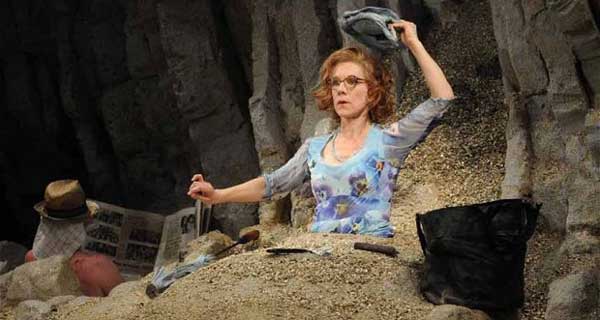 Despite having spent much of the last four years wondering who it was that Matt Smith looked like as he clambered around the TARDIS, especially when he was in “serious” mode, the realisation was elusive. As the final Act of Samuel Beckett’s Happy Days (now playing at the Young Vic in a revival helmed by Natalie Abrahami) revealed a dusty, desperate, occasionally demonic Juliet Stevenson as Winnie, buried up to her neck in rock and pebbles, the answer was suddenly there. Her face was as close to Smith’s as it could possibly be – alarming and revealing all at once.

Happy Days is not a happy play. It is Beckett at his most confronting, most understandable, relentlessly surreal and disturbing. Essentially a monologue, it is an endurance test for both actress and audience.

Abrahami’s production is remarkable in a number of ways.

Paule Constable’s lighting is astonishing, and the sense of oppressive unrelenting heat and light is dazzlingly conveyed. Tom Gibbons provides the sound design and it is startling. Thunderous screeches of alarming high-pitched agony force Winnie to keep her eyes awake and jolt the audience out of the role of watcher and catapult them into the role of sharer.

Then there is the set. Vicki Mortimer has created a place which manages to evoke a coffin, a quarry, an Egyptian tomb, a ritual burial spot, an odd holiday destination,
some special area of Hell devoted to torture and a huge great foot – and in the middle of this is Winnie, in the first Act buried waist-high in the stone and gravel, in the second Act up to her neck, while behind her, like the sand in an hourglass, pebbles and rocks descend at irregular intervals, sometimes a trickle, sometimes a rush. The sense of doom is thick in the air and everything about the set compounds and heightens that.

The combination of creative talents at work here creates an astonishing framework for Winnie’s exposition. I doubt there could be a harsher, more desolate imagining of the setting for Beckett’s work.

Stevenson is at the top of her game and uses every trick going to make her Winnie unforgettable. She uses her eyes to great advantage and there is a sense of ritual and resignation to everything she does. Effortlessly, she conveys the torment of her daily dreary existence and shows remarkable dexterity in conjuring up the little things which make her time pass. The sequence where she unveils the music box is utterly beautiful and a complete contrast to the dry, sudden appearance of the gun.

She uses every aspect of her voice to provide pace, pitch, pause and precision in delivering Beckett’s words and establishing his vision of a mundane life buried in unconquerable and unfathomable hardship but nevertheless a life – full of memories of joy and happiness and the times that make it all worthwhile.

Stevenson is especially marvellous in the mostly desperate second Act. Her screams of terror and fatigue are really quite something. A powerful and haunting performance. But it is doubtful that it is the best performance of Winnie Stevenson could give – she seems too restrained in the first Act to really shine. If the technique and stamina she brings to the second Act was more available, more drawn upon, in the first Act, this would be the performance of her career.

In the thankless but quite difficult role of the mostly grunting Willie, the man who is always there, scrabbling around in the dark, looking for direction, guidance and comfort, David Beames is as good as anyone could be. And through him, you get a true sense of the touching side of Stevenson’s Winnie.

This is as good a production of Happy Days as one is ever likely to see and Stevenson shines. But not quite as brightly as she could or as Paule Constable’s faultless lighting suggests she will.

Still, a great achievement for the Young Vic and Natalie Abrahami.