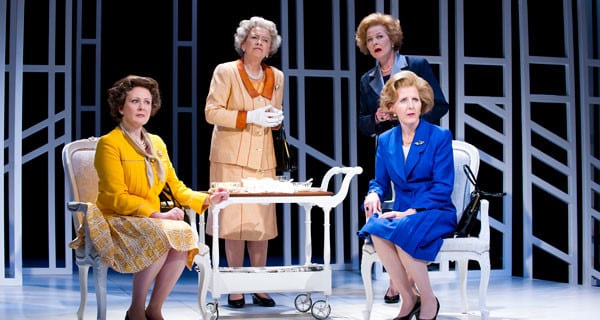 It is interesting how often it happens that different creative forces embark upon the dramatisation of specific events or lives or moments in history simultaneously. Almost always, one project will be remembered more, sometimes the one that was presented first, sometimes because one is just much better than the other(s).

Moira Buffini’s Handbagged covers similar territory to sections of Peter Morgan’s The Audience; it looks at the regular private meetings between Margaret Thatcher and Elizabeth II, imagining the detail and seeking to comment on the character, beliefs and sympathies of both women. Directed by Indhu Rabishingham, the Tricycle’s sold out production of Handbagged is now playing at the Vaudeville where it has successfully transferred.

It provides some great opportunities for actors, does some interesting things with form in terms of the presentation style but, for the most part, it is more history lecture than play, more sketch comedy than character study. At its most engaging, in dealing with tensions over the Commonwealth and Apartheid and then the Sunday Times scoop, it mirrors The Audience, for it was those issues which took prominence in the Thatcher scenes there.

But Handbagged sets out to be entertaining rather than insightful and in this aim it often misses the mark. Partly, this is because Buffini does not take a position about either woman, seeking instead to be scrupulously fair to both. In The Audience, Elizabeth was the heroine. But here, there is not sufficient detail, not sufficient conflict to permit heroines.

Two actresses play each woman, a younger and an older version. Quite why that is, one never understands. Although this doubling up does offer some amusement, mostly it serves to undermine any sense of truth in the playing and leads, with a night follows day inevitability, to a “Whose impersonation is better?” duel.

There might have been insight to be gained from this if, say, the older Thatcher only spoke with her younger self, or only engaged with the older version of the Monarch; a reflective, accumulated wisdom might have contrasted with in the moment thinking, or a sense of two people on a journey together might have been gleaned.

But where, as here, the older and younger selves adhere to no boundaries, the need for and purpose of the different ages is puzzling.

Add in the broken fourth wall – there is much direct dialogue with the audience – and the result is a play that does not seem to have a clear purpose, a focus on form to the detriment of substance.

Luckily, the acting is of a high standard and it is this, more than any other single factor, which permits the evening to be not entirely frittered away.

The sharpest performances come from Neet Mohan who is breathlessly good in a series of parts including those as diverse as Neil Kinnock, Kenneth Clarke and Nancy Reagan (a role he masters with impressive versatility). Mohan imbues everything he does with clarity and real style; proceedings bounce along with joyous verve when he is in a scene.

Marion Bailey is a treat as the older version of Elizabeth. She gets the voice exactly right and thoroughly embraces the spirit of a monarch who has reigned for a very long time and lived a life steeped in politics. She is funny too, but never in a way which compromises the sense of royalty she weaves.

Fenella Woolgar is as impressive as ever, here depicting the younger in-power version of Margaret Thatcher. Bearing, voice, hair, posture – all impeccably true. Woolgar strives to unearth the woman underneath the mystique, the detail rather than the diva. There are times when Woolgar is so affecting that one has sympathy for Thatcher.

Jeff Rawle does a good job of a number of supporting roles, but his best work comes in the scenes where he is Dennis Thatcher or Rupert Murdoch. He brings a weary but nevertheless infectious insight into Thatcher’s men and provided a solid base for the work of the two Margarets.

Stella Gonet starts the evening very impressively as the senior Thatcher and does exemplary work in the first fifteen minutes. There is an excellent moment when younger and older Thatcher say the same lines – in unison in every way, two sides of one coin. But as proceedings progress, and more of the meat is given to Woolgar, Gonet apparently gives up, shouts too much and becomes almost a caricature of her own performance. It’s a pity and more likely than not a product of the writing than anything else.

The writing also lets down Lucy Robinson’s younger Elizabeth. There is just nothing of interest for the character to do. Robinson is very winning, but it’s unrewarding work unfortunately.

Handbagged promises much and delivers very little. It’s vaguely interesting and occasionally genuinely involving, particularly when Mohan and Woolgar are in the spotlight. But in two relatively short scenes, The Audience dealt with this key relationship much more clearly and cleverly.

Book tickets for Handbagged at the Vaudeville Theatre