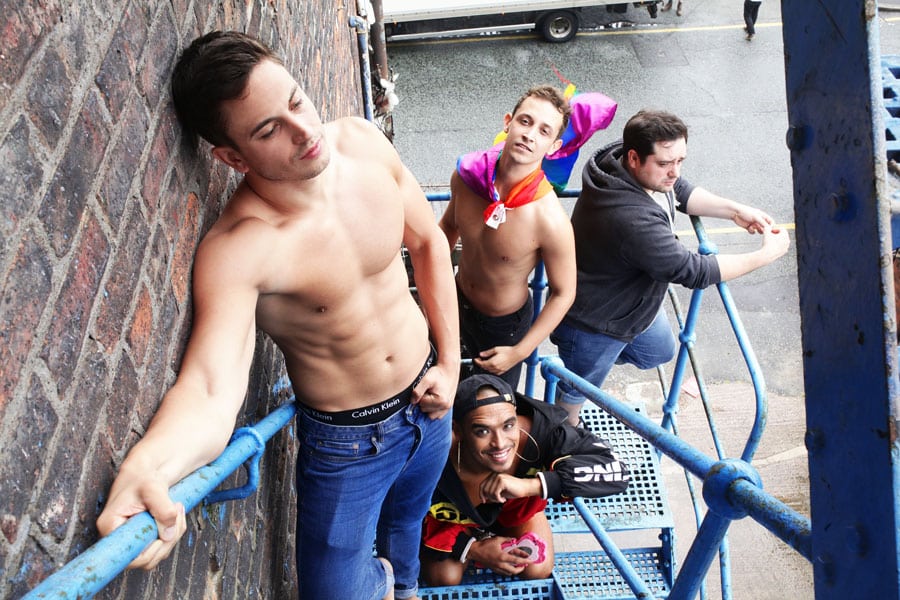 This is a really exciting new work by a fresh pair of songwriters, book writer and lyricist Leoe Mercer and composer/arranger Stephen Hyde, a pair of Oxford chums recently graduated with a mission to re-invent musical theatre in an invigoratingly fresh and gorgeous way with their synth-pop album-sized numbers.  These are people who could be writing for the pop industry, and maybe very soon they will be: they have the ear of today and speak directly to the heart with their exquisitely crafted and deliciously infectious songs.

These writers met while studying at Oxford University (Philosophy and Theology for Leoe, Music for Stephen) and quickly established that this is what they wanted to do.  Last year, they launched their first musical, ‘The Marriage of Kim K’ (yes, it is about the wonderful Mrs Kardashian), which did very well and is now about to open in Australia.  Meanwhile, last November – just last November – they decided they wanted to explore another aspect of contemporary popular culture: gay internet hook-ups (often euphemistically referred to as ‘dating’ – anyone who has seen ‘Chicago’ will know the difference between ‘fooling around’ and ‘sleeping around’ – so let’s not kid ourselves, shall we?).  What then emerged was a batch of songs rather like those one would find in a concept album: these duly found their way as part of a festival of new work onto the stage of the Bunker theatre in Southwark (as long ago as May this year), where it achieved some impact.  A tour followed, including Manchester’s Hope Mill and Buxton.  Reviews flooded in, many of them very enthusiastic, and often contributing helpful observations and suggestions.  Leoe and Hyde – for that is how we much know them – took all of this on board, and re-worked – slash – rewrote a good 80% of the show, and it is THIS most recent incarnation of the species which we have now seen brought into view at the Angel.   So, the contemporary pitch and sound of their material, their openness to improving their work, and the speed at which they progress should be attracting the attention of producers and houses up and down the country.

It’s about time, because so far they have done pretty much everything themselves.  Rather like latter-day Lakeland Poets, operating out of bases at the northern and southern ends of Cumbria, with a theatrical base in Manchester, everything so far has been achieved at a highly improvisational level.  The whole score of this show, for example, has been cooked up on Stephen’s Mac.  It cries out for better resources and investment.  Similarly, the staging here is done by Leoe, and he makes an admirable fist of what is – in effect – a production without decor.  A few scraps of costume or props appear, and then vanish, but this is effectively an empty black box space.  There is slightly more sophistication in the lighting by Rajiv Pattani, and the sound design (courtesy of Producer/Technical Manager, Dan Mawson) is exemplary: the balance between onstage voices and backing track score is near as damn it perfect, and always totally unobtrusive.

One practical area where the company really do score is in the powerful casting.  Brendan Matthew (whom we have increasingly come to know as a bold and innovative director, especially of new work) in the lead role of a big boned boy looking for true love in the high-speed, low-attention world of insta-satisfaction gay pick-up apps, here lavishes upon the evening a great deal of his wonderfully attractive high voice, which has the haunting capacity to modulate seamlessly between tenor and falsetto ranges, creating an ethereal, other-worldly effect that is simply thrilling.  He is fabulously supported in his quest by the game trio of much prettier boys.  First, X-Factor survivor and now solo recording artist, Seann Miley-Moore is the Asian athlete Aziz, whose rendition of ‘Suppression Effect’ alone will stay with you forever: there isn’t a thing this guy doesn’t know about timing and phrasing, and he moves like a dream.  His adversary (in most things) is taken by Adam Braidley’s Joe/Dom, another supremely masculine, athletic, energetic powerhouse of a performance, with a gift for comedy and split-second swaps between his characters that is one of the highlights of the show.  And then there is flatmate Tyler, Steve Banks, who is every bit as sporty as the other two.  Quite what he is doing living with anti-exercise Guy is one of many narrative questions that the script of the show has not yet begun to investigate.  Nonetheless, all four performers throw themselves with gusto into their parts, and have demonstrated sterling commitment to its development, contributing many ideas of their own, especially in how the usually fresh as a daisy dialogue sounds.  The original choreography by Yukiko Masui is revived here with panache, as is a goodly amount of the original direction.

I feel sure that, with time – and quite possibly much sooner than later, the writers will dig deeper into these likeable characters they have drawn and endow them with more substance.  The moment is right to do that.  The show has now grown to two parts, with an intermission, and now feels more like a fully developed piece.  Of course, a bigger budget and more time would allow some wonderful theatrical elaboration of this concept, as well as a more ironed out performance of what we have so far.  As things stand, we are now positioned so that we connect with these characters’ hearts and care about them: next, this audience member at least wants to know much, much more about them.  I am convinced that the overwhelming strengths of these hardy and inventive creatives will come up with answers to the questions in our minds in ways that we cannot begin to anticipate: they are just too good to give us the obvious.  What they give us is something special.  But before that happens, they are already moving onto their next project, ‘Queueue’, an immersive musical about millennial internet addiction.

Stay connected to find out how their work develops next via their website.  And, remember, surf responsibly.