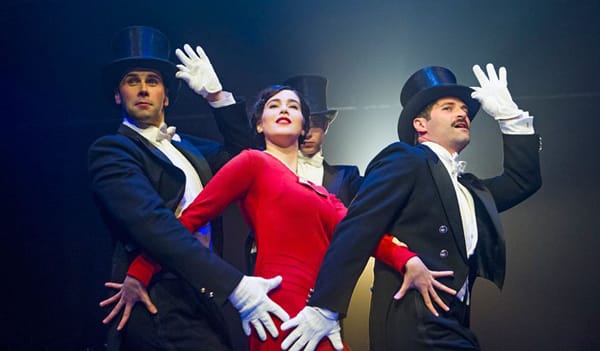 First, it was a novel by Vicki Baum. Then a play, adapted by, first, Baum, and then William A. Drake. Then a famous 1932 MGM film, starring Greta “I want to be alone” Garbo, which garnered an Academy Award for Best Film. Then, in 1958, the team behind Kismet, Luther Davis (book), Robert Wright and George Forrest (score and lyrics) collaborated on At The Grand, a musical adaptation for Broadway. It went nowhere, but thirty years later that creative team re-grouped and, with help from Maury Yeston (who composed six new songs and substantially revised lyrics) and director/choreographer Tommy Tune, turned At The Grand into Grand Hotel which opened triumphantly at the Martin Beck Theatre (now the Al Hirschfeld Theatre) on Broadway on 12 November 1989.
Grand Hotel won Tony and Drama Desk Awards for Best Direction and Best Choreography but not for Best Musical. When the Donmar revived the musical in London in 2005, the production won the Olivier award for best revival. Awards for best revival, of course, don’t depend on the quality of the raw material.

A decade on and a new production of Grand Hotel is now playing at Southwark Playhouse, this one directed by Thom Sutherland with choreography by Lee Proud and musical direction by Michael Bradley. It is 105 minutes of dazzling dance routines, lush and attractive music, and some superbly judged performances. This is a production of a musical which embraces the notion that music and movement can be moulded into a specific narrative language to enhance and illuminate the telling of a complicated narrative. For the most part, it is highly successful. 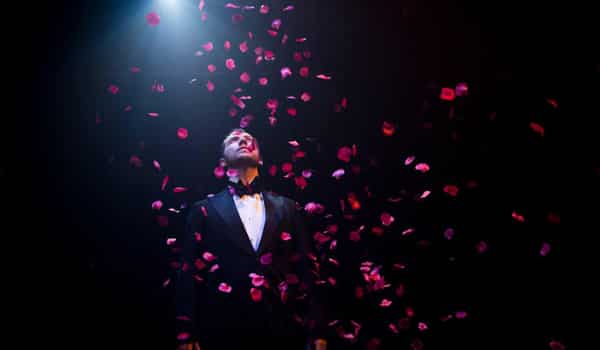 Lee Proud’s choreography is the key to exuberance and insight here. Despite the fact that an odd decision has led to the production being presented in the traverse, with a relatively narrow centre strip on which all of the action happens, so that everything is curiously cramped, Proud ensures that large ensemble routines are fluent, crisp, and riddled with incident and eccentricity. Be it foxtrot, waltz, charleston or whatever, small or large in scale, there is purpose and pleasure in every step, and the entire cast are well drilled, and perform the various routines with energy and enthusiasm. This maelstrom of movement is vital to unleash the potential of Grand Hotel.

Set in 1928 Berlin, in the grand foyer, corridors and rooms of the titular Grand Hotel, the work is eloquent about a number of different themes: living a lie; making the most of life; the pitfalls of wealth; seduction and persuasion; fantasy and reality; life and death. What makes it engaging, and occasionally thrilling, is the form used to present these themes: a continuous stream of melody and movement, sometimes setting up a point, sometimes exploring it, sometimes moving on from it – always, however, working with other themes, in a similar way, to create an overall tapestry.

There may be a lot of people in the hotel, but not all know each other, even if they speak with or deal with each other. Some people who are in the Hotel every day do not know of the existence of others who are there, while others have their lives changed forever by their encounters. Chance and opportunity turn out to be as important as planning and persistence. Through a series of short tales involving a range of characters, some of whom have narratives which take surprising turns, some of which intersect or collide, Grand Hotel entertains and provides social comment in equal measure.

In a big picture way, the piece looks at the futility of human obsessions, the way history repeats itself, and the way power and money can transform and change lives. It owes a deal to the innovations made by Cabaret and Chicago, particularly in the way bright, ebullient numbers juxtapose against sombre moments for particular characters. Use of a caustic, gruff narrator-like figure, Colonel-Doctor Otternschlag, permits the audience the feeling of insider as well as voyeur, and markedly ups the stakes in terms of empathy. 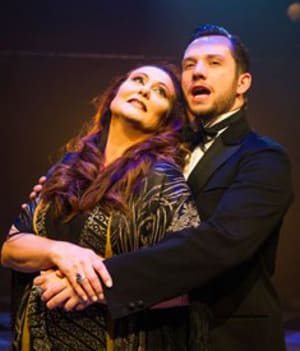 Proud’s choreography is redolent with an acute understanding of all this and everything he does aims to help involvement in and understanding of the work’s intent. The hotel is seen as reflective of the Berlin experience and that is reflective of world experience: the microcosm in the hotel provides universal truths and observations. From the almost military opening routine, through the set pieces and the smaller incidents, the big, joyous all-in numbers, and the more intimate moments of pain or joy, Proud sees to it that dance propels the action, accentuates the fun and underscores the darkness.

Director Sutherland does not fare quite so well. There are some peculiar casting choices, which diminish rather than improve the possibilities for the piece, the limitations imposed by the traverse staging, and the odd, jarring throw forward to Nazi Germany which all but suffocates the final scenes. All of this, together with the constant presence of the large chandelier (a lame surprise ending involving its stuttering descent snuffs out the evening’s action), detracts from Proud’s achievements and halts the production from achieving greatness.

But, nevertheless, given the strength of the musical skills on display by ensemble, orchestra and Bradley, and the individual skills of some of the key performers, and a pace which, while occasionally lagging, never loses momentum, Southerland has presided over some great entertainment.

Curiously, some of the smaller parts are played with a panache and flair denied some of the leading roles. James Gant is excellent as the petty tyrant Rohna, the hotel manager with an eye for social standing, precision and order in all things related to the Hotel, and a lust for young men over whom he has power. His presence is broody and insinuating, his voice firm and clear. Jonathan Stewart is outstanding as Erik, the front desk clerk, whose wife is giving birth to their first son but who must stay at his post for fear of losing their income. He is electrifying in three key scenes and provides the evening’s best acting in those scenes: the moment he gets the news about the birth of his son; the moment when he realises Rohna is trying to persuade him to have sex with him; and the moment when he is gifted the Baron’s cigarette case. Outstanding.

Charles Hagerty is excellent (but scandalously underused) as an unforgiving gangster representing interests to whom the Baron is indebted and forcing the Baron’s hand in a way that will alter his future; Samuel J Weir, Leah West, Durone Stokes, Jammy Kasongo and Rhiannon Howys all do great work in minor roles and all, together with Hagerty, Gant and Stewart dance with gusto and style. The faux marble floor positively radiates with their combined energy and commitment.

Victoria Serra plays Flaemmchen, the pregnant typist looking for a way to survive and soar. She pumps vigour and conviction into every phrase of “Girl in the Mirror” and charts the course of this hapless character’s life rather well. She seems slightly too earnest at times, when radiance and unrestrained charm might be better options, but overall she is very successful. Her character has difficult scenes with Jacob Chapman’s dull and wooden Preysing – a businessman who has utterly lost his way. Chapman might have the right colour hair (grey) but not the ability to enliven and make believable his complex character. Consequently, all those whose story arcs were touched by the Preysing character suffered. This was inexplicable: grey hair should not substitute for ability, and there were several in this cast who obviously could have made the part work supremely well.

As the fatally ill accountant, Krigelein, George Rae appeared too young to be ideal casting, but his skill as a performer and singer showed clearly why he was cast. He may not look right, but he played the role completely engaged with every twist and turn; fragile and optimistic and forgiving. It is a joyful celebration of life in every aspect: Rae makes the impossible seem possible. His performance was in marked contrast to those of Valerie Cutko and David Delve, both of whom let the potential of their characters pass them by. Delve, as the Colonel-Doctor was too much spleen and spittle, ignoring the mercurial and affecting aspects of his role. Cutko was much too obvious as the secret lesbian admirer of the fading ballet diva; subtlety would make her delivery of “How Can I Tell Her” much more impactful.

As the unusual, and unexpected, central pairing, Scott Garnham and Christine Grimaldi overcame a generation gap and a singular lack of ferocious chemistry and glorious charm to produce a surprisingly effective tale of love unexpected. Garnham’s Baron was not quite dashing enough, not quite engaging enough and, although he has an excellent, clear tenor sound, he forced his tone too often to be genuinely captivating. The audience is sung at, rather than lost in the beauty of the sound. Grimaldi did not convince as a glorious prima ballerina; she seemed more a theatrical diva in decline. Her movement was not light enough, not shimmering enough to suggest a past of triumphant Swan Lakes.

And yet, together, in the wash of the glorious “Love Can’t Happen”, both rose to the occasion, presenting a genuinely touching and delightfully warm coupling, a moment of honesty in a sea of bluff and bluster. And Sutherland’s use of rose petals as a motif, an emblematic symbol of passion and unfulfilled promise works well – the saccharine ideal of the petals contrasts excellently against the bittersweet Union and its aftermath.
In the end, this production shows the flaws in the book quite vividly, and although Proud’s choreography works wonderfully to distract and obfuscate those flaws, the casting and direction ensure they are vividly in view. Not even the music, which, at its best, is as good as anything in any other Broadway musical, and at its least effective is engaging and bright, can overcome the obstacles there.

More space, better casting of some roles, and less reliance on directorial innovation (the Holocaust might sit well as an ending for Cabaret but it fits less convincingly here where events play out five years before Hitler came to power) might have seen this production really take flight. As it stands, though, it is a brisk reminder of the joy of Grand Hotel and the possibilities it offers.

Seeing it induces one to wish not to be alone, perhaps to the chagrin of Garbo’s eternal spirit.