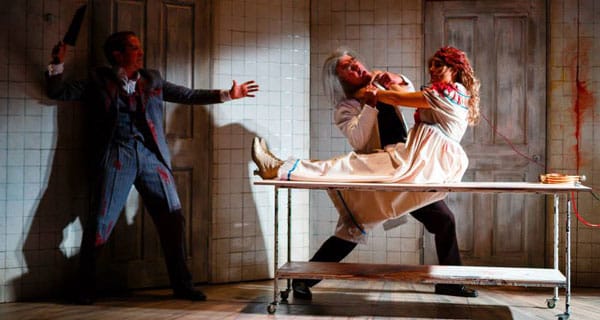 Carl Grose is well known for dark, deranged plays such as Horse Piss for Blood as well as his strange and imaginative dramas for Cornwall’s Kneehigh theatre company. With Grand Guignol, he has been inspired by the notorious theatre of bloody spectacle that horrified Paris audiences for over 60 years from the late 19th century. Many of the real-life people of the Théâtre du Grand-Guignol in the early 20th century are brought back to life in this frenetic, blood-splattered comedy that has arrived at Southwark Playhouse from the Theatre Royal Plymouth. It is based around André de Lorde, who wrote over 100 plays of horror for the Grand-Guignol between 1901 and 1926, and his collaboration with experimental psychologist Alfred Binet. The twisting, twisted plot explores what might inspire someone like de Lorde to create such lurid stories against the backdrop of a mysterious serial killer prowling the streets of Montmartre.

Alongside camp re-creations of Grand-Guignol-style plays, the action takes us back stage with a colourful troupe of players, again loosely based on real-life figures. Emily Raymond and Robert Portal bring laughs as over-the-top hams Maxa and Henri who have found their niche playing murderers and mutilated victims, while Paul Chequer is delightful as he comes up with new devices of torture and death as the theatre’s technical director Ratineau. Max Maurey, who was the Grand-Guignol’s director for nearly 20 years, is re-imagined with cool deadpan humour by Andy Williams as he seeks new ways to make money out of gruesome melodramas.

As de Lorde, Jonathan Broadbent is painfully polite and affable, even as he enthusiastically shares his latest demented tale of horror. Matthew Pearson is the intense but bewildered Dr Binet, often close to hysteria as a fanboy fascinated by de Lorde and his sick creations. They work best as an ensemble, with many of the cast playing different characters, in a fast-paced production directed by Simon Stokes, artistic director at the Theatre Royal Plymouth. There may be plenty of blood, guts and severed body parts but there is little reason to faint as audience members regularly did at the original Grand-Guignol. It is a darkly entertaining show, with the campness and broad comedy reminding us that the horror is just for fun.

At Southwark Playhouse until November 22.