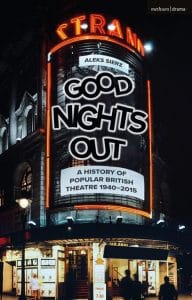 Since his landmark Book of fringe and alternative theatre of the 90’s and therefore coining the term In-Yer-face Theatre, Aleks Sierz has become the authority on twentieth and twenty-first-century British Theatre. Like most academic studies, he has covered the works that have had a major influence on British and global theatre, but here the focus is on the mega-hits, the popular plays and musicals that ran for years, and the changing tastes of the public that flocked, and continue to flock, to see them. Defining a mega-hit as a show that achieved 1000 performances, the equivalent of a two and half years in the West End, shows that not only delight but say something about the society that went to see them. We not only read about plays and genres who heydays have passed, (farce, for example), but also those that appear to be critic and audience proof, genres that still appeal, such as murder mysteries.

What is fascinating are the plays that were enormous hits but have not survived time and history. Arranging the chapters into themes, it is fascinating to discover the hits that I, and possibly many readers, did not know about. For example, from the 1940s we all know Coward’s Blythe Spirit and many could name Terence Rattigan’s Flare Path, but his mega-hit was While The Sun Shines, (1,154 performances), a slick romantic comedy of wartime engagements now long forgotten. It appeared to have fulfilled the audience’s need to muddle through, rather than be heroic. Hugh Hasting’s Seagulls Over Sorrento, (1950- 1,551 performances), which for many audience members who had been in the services during the war, struck a chord with its look at the realities and humour of military life. Foregrounding the British love of nostalgia, Sierz brings the war chapter up to date with War Horse, and his discussion throughout the book is clear and lively.

One very refreshing angle is that he eschews academic snobbery towards mega-hits, and examines each play and musical on its own merits and flaws. In discussing the aspect of child abuse within the case that inspired the play, and is in the text, Agatha Christie’s The Mousetrap is given due consideration and respect, and Sierz may be the only person that could persuade me to go and see it! Audiences in whodunnits enjoy playing the game, and perhaps this is why her work still survives. None of the sex comedies explored in the chapter on sex has survived, mainly because of the changing and more enlightened attitudes towards sex and sexuality, but it is amusing to read about the involvement of Paul Raymond in “legitimate” theatre! Family issues are contrasted well with the traditional attitudes of Spring and Port Wine, (1965), and single parenthood of The Curious Incident of the Dog in the Night Time, (2012). Attitudes towards class and snobbery are exposed in the similarities between Blood Brothers and Billy Elliot the Musical, and history is presented in Gothic and Pastiche genres.

It’s a hugely enjoyable read, one that never talks down to the reader, but which has depth and knowledge to provide an informative context for the relationship between mega-hits and audience tastes. It deserves a readership beyond academic libraries and students, and discusses many productions that the reader would have seen!