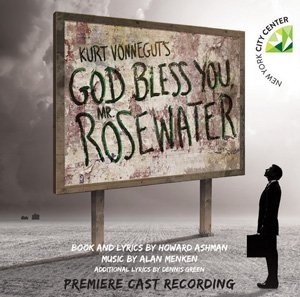 God Bless You Mr Rosewater was the first musical collaboration between Howard Ashman and the prolific Alan Menken. Based on Kurt Vonnegut’s classic novel of the same name, it was recently the subject of a semi-staged concert at New York’s City Centre, the cast of which were captured on this Premiere Cast Recording.

God Bless You Mr Rosewater tells the story of Eliot Rosewater, a millionaire who inspired by the utopian vision of novelist Kilgore Trout drunkenly decides to blow his fortune on an impoverished town. But there are forces who want to stop Eliot’s philanthropy—especially Norman Mushari, a lawyer plotting to have Eliot declared insane.

Opening Off-Broadway in 1979 the show had a run of 49 performances. This new recording is a gloriously rich and moving experience. I can’t speak for the book of the musical but these are some of Howard Ashman’s finest lyrics and are perhaps all the more relevant given the current economic and political climate in the USA.

The recording features a solid ensemble but I would be remiss if I didn’t mention two performances in particular. Santino Fontana plays Eliot Rosewater imbuing the show’s hero with the innocent charm personified by veteran movie actor Fred MacMurray. Even on this recording he is immediately likeable and a bit potty, but there’s sincerity and truth in his vocal for Thirty Miles From The Banks Of The Ohio /Look Who’s Here.

James Earl Jones pops up as Kilgore Trout and is also credited as ‘a voice not unlike God’s’. It’s an apt description and the track ‘A poem by William Blake’ is wonderful.

If a cast recording is a calling card for people who may not have seen the show, then this recording has certainly done it job. It has woven its spell and made me want to see a production or even a concert version so that I might experience more of the wonderful world of Eliot Rosewater.

In a world faced with numerous issues, I leave you with this portion of Howard Ashman’s beautiful lyric and hope that it serves as an impetus to order a copy of this recording.

Thirty miles from the banks of the Ohio,
I am standing on a bare and lonely street,
In a town where the economy’s depressing,
And the people are completely obsolete.

Oh, the railway hasn’t run through here for ages,
And the factories are automated  too,
So the pretty people leave this town at twenty,
As does anyone with much of an IQ.

BUY A COPY OF GOD BLESS YOU MR ROSEWATER