Julian Eaves visits Upstairs at the Gatehouse to review Give My Regards To Broadway. 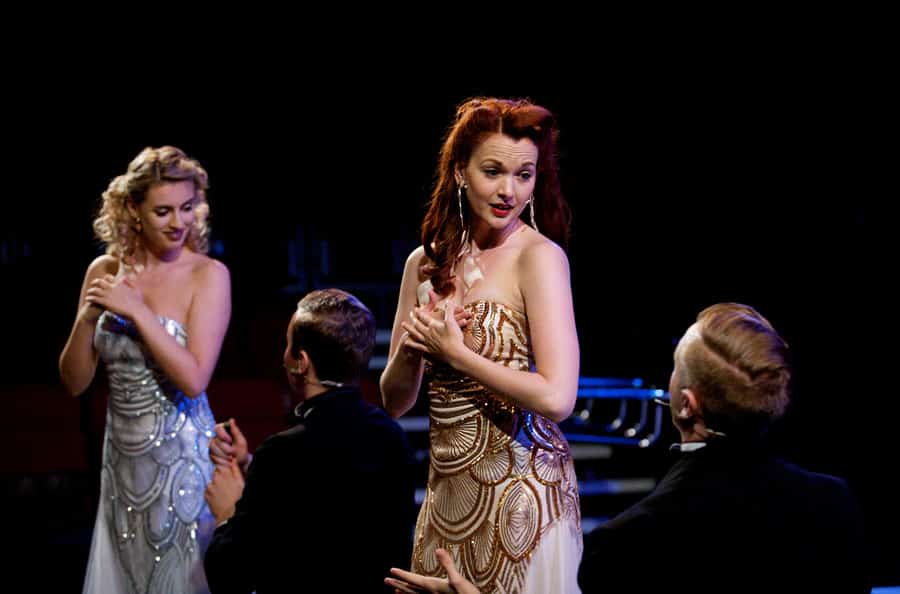 The wonderful thing about this beautiful big little fringe theatre in North London is its continuing ability to identify and give space to the best new theatrical talent in the country.  Any visit to this spacious and hugely versatile room above a pub will take you up a staircase that is literally papered with posters announcing previous productions, in which you will see some of the greatest names in contemporary British entertainment represented.  Go further, into the upstairs bar, and the walls are lined up to the ceiling with the spotlight photographs of some of those who have played here, and they comprise a veritable roll call of the best the industry has to offer, especially with respect to that most exacting of forms: musical theatre.

And now, with this charming, summery revue, we see confirmation that new faces and names will be added to this constellation of ability. The format is simple: two boys and two girls, a piano and drums, take us through a parade of the Great American Songbook from the days of George M Cohan (who provides the title number) up to much more recent successes of the post-war era – although the show is billed as breaking off in 1942, many numbers easily cross that line, and similarly, much of the material breaks the stipulation that it emanates from the Great White Way: Hollywood is well represented here, with some very attractive material.

In the capable hands of Harry Blumenau – known to the industry in other capacities, too, but here is an efficient and lucid director, the sequence of numbers is well organised and smoothly executed.  Also, as the work progresses, the fluidity and naturalness with which the cast interact with their audiences are improving, with some performances creating some delicious magic.  The contributions of the protean choreographer, Chris Whittaker help here: he knows well how to use the space, and sometimes has great fun in arranging very appealing dances for his team.  I have a feeling that both elements of the show will continue to attract the attentions of these creatives during its run.

The most experienced of the quartet of performers is without any doubt the American, Rebecca LaChance, who brings amongst other things the expertise of Tisch and the female lead role in the recent Chichester and UK touring production of ‘Mack and Mabel’ to the party.  She is a compelling stage presence, whose masterful attention to detail is enlivened by her steadfastly relaxed and spontaneous manner; it is an irresistible combination and I am sure we will be seeing a whole lot more of her in the future.

Slightly newer talents are the attractive soprano of Thea Butler, who is rightfully careful of her beautiful voice, never forcing it.  The boys are the lively and, like the ladies, also well contrasted pairing of the dramatically impressive Albert Linsdell, whose athleticism is always stimulating, bringing most of the power to the choreography, and the suavely voiced, Jamie Cullen-like Ben Lancaster, whose apparently easy, almost carefree vocal manner is invariably spot on and fresh as a daisy.  And it is no easy task to make such familiar musical material sound so new and engaging.

The performers’ trumps, however, rather lie with the deliciously sympathetic musical direction from the piano of the increasingly sought after Oli George Rew, who is quickly turning into one of the best accompanists around.  You will remember his performance, and that of his excellent drummer, here every bit as much as that of the actors.  That fact is in no small measure due to the usually stunning musical arrangements of a scorchingly hot newcomer to the business: Lawrence Michalowski.  Barely out of college, Michalowski is a striking new talent, with the capacity to rethink even the most well-trodden musical paths, finding new sounds to explore in some of the most repeated anthems of musical entertainment history.  His freshness of imagination, and the rightness of his choices will literally take your breath away, as he overwhelmingly scores hit after hit with his brilliantly rethought scorings.

It will be a matter of choice whether you find yourself going along with the decision of the creators to omit anything that could be construed as a more defined theme or narrative-like element.  Hitherto, that has been a sound and trusted element of the Upstairs’ revues, and audiences here may well expect this kind of supporting framework to be present in this show.  Who knows?  All one can say is that it is not present in this work and, personally, I rather missed it, or something like it.  Maybe I have been conditioned or trained, to anticipate that a revue has more structural substance to it than is available here.  If so, then I am sure I am not the only one: perhaps that is something that needs to be taken more into account?  While the show rejoices in truly magnificent musical arrangements, maybe it could benefit from having more of a firmly drawn ‘attitude’?  And then possibly some of the grey areas in direction and choreography might be more strongly defined?

The show is nicely lit by Ali Hunter, with a few pert flourishes, and the sound by Nico Menghini is possibly a shade too unobtrusive: the decision to have the voices unamplified is fair enough, but there were one or two issues with audibility.  Overall, this is a further credit to the creative development of producer, Joseph Hodges, who – having begun at such a tender age – has already achieved so much.