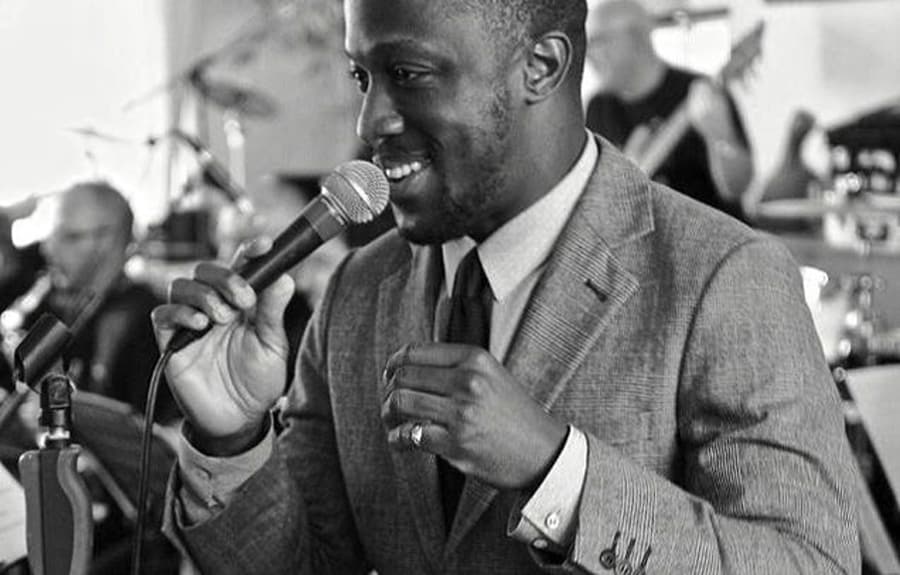 It was great to bump into Judi Dench – and friends – on the way into The Pheasantry’s select downstairs cabaret bar a couple of Sundays ago, and wonderful to see that Giles Terera has such a stellar following: he deserves it.  He is another class act, and in this short residency of three nights he packed in surprises and delights in abundance.

Beginning with a bold a capella rendition of ‘Feeling Good’, begun in darkness in the wings and finishing with a blaze of colour and light at the piano, we segued into – what else? – ‘The Tale of the King’s Road Piano’, which sounds to me a lot like a Leonard Cohen number, but is in fact by none other than Giles himself.  We then saw the gospel vibe turned right up for Clint Dyer and his harmonica embracing – amongst other things – the old Harry Belafonte hit, ‘Matilda’ and a lovely snatch of ‘What A Friend We Have In Jesus’.

Giles also writes, and writes well: tonight we heard his ‘Nicky’, a terrific stand alone tune, and this merged into Bill Withers’ ‘Grandma’s Hands’, for which he accompanied himself on the guitar.  The thing about his cabaret act is that you never know where it’s going next: each twist and turn met with delighted gasps of surprise, which were capped with even more delight when we found out how good he is at each of the skills in his set.  The repartee was spot on, too, from family memories, via current affairs, to showbiz gossip, often connected with his CV.

For instance: we pushed ahead into racier territory with Robert Johnson’s gorgeous blues, ‘Come On In My Kitchen’, and then – all the way from ‘Ma Rainey’s Black Bottom’ (I believe) – came ‘Hear Me Talkin’ To You’.  This took us to ‘Ramblin’ Man’, and – very different – Prince’s ‘Raspberry Berret.  In a brilliant change of tone, we then switched to the emotional heart of the first half of the evening, ‘Georgia’, a song that Terera can make bleed tears.

Just when you thought it couldn’t get better, it did.  On came Tyrone Huntley, and they duetted marvellously in ‘A Bridge Over Troubled Waters’.  In a perfectly timed volte face, then came Jon Robyns – in bracingly caustic and challenging mode – with Princeton from Avenue Q to do (more than justice to) ‘The Wind Beneath My Wings’.   And then?  It was the divine Alexia Khadime who, despite having rushed over from panto in Hackney tore into ‘Had I A Golden Thread’ to devastating effect.  And then Giles topped it with Harry Warren’s beautiful ‘At Last’, by which time we were all in urgent need of something delicious to drink.  The intermission arrived perfectly on time.

The second half was just as lovely, with a deft ‘Singin’ in the Rain’ (complete with soft shoe shuffle on the carpeted platform), and then a lusty trio of Myra Sands, Finty Williams and Chris Logan doing a take on ‘You Gotta Have A Gimmick’ from Gypsy.  The tone was niftily re-established by Terera’s now signature ‘Pure Imagination’, a number that his exquisite timbre and phrasing, aglow with baritonal lushness make into the most seductive apostrophe to an indulgence of the spirit.  And then came a segue into another more contemporary tune, ‘Sweet Dreams Are Made Of This’, where he shows his bright versatility once again.  We even got a smidgin of ‘Jailhouse Rock’ before launching into Dylan’s stinging ‘When God’s On Your Side’ (perfect for the current political climate in the US – and elsewhere), and then the genial humour of the old Slim Whitman number, ‘Lonesome Cattle Call’.

And finally…. !  Miss Rachel Tucker swept into the dive, and notwithstanding the absence of all rehearsal time Mr Terera on the piano blew the roof off with ‘A Change Is Gonna Come’.  What a night!  But was this ‘the end’?  Oh, no.  Giles had one more treat up his sleeve: ‘Mr Bojangles’, done with his trademark understatement and crystal clear delivery.  By the time everyone trooped back onto the stage for the group curtain call, we all knew we’d been through something special.  And for all of you who missed him this time around, keep ‘em peeled: he’ll be back!

FIND OUT MORE ABOUT EVENTS AT THE PHEASANTRY