Every now and then, a show comes along that is just perfect, and this is such a one.  It is all the more delightful for being the premiere production in a brand new theatre that is also a perfect space.  The combination of work and venue is sure to prove hugely popular over the inaugural season of founder Fawn James’ magnificent new West End project and is a brilliant opener for Rachel Edwards’ first season as Artistic Director here. The new building by SODA and interior by charcoal blue allow for at least 8 different configurations, which can be changed several times a day, as regular visitors to this venue will quickly find out: it is hosting daytime events and late-night music and spoken word events, too.  And all, I hasten to add, at very reasonable prices.

The piece chosen to launch this intimate, high-spec 165-seater is Dave Malloy’s exquisite ‘song cycle’ for four actor-musicians (with a few surprise additions).  There are times when a musical score seems to be nothing more than a random collection of songs; well this is a collection of songs that is a perfectly harmonious ‘score’ in the proper sense of the word.  And MD Benjamin Cox (who is as experienced in opera as he is in musical theatre) has trained and supervised the cast to live and breathe the perfection of each superbly integrated moment.  As for the rest of the staging, director Bill Buckhurst has stayed as much out of the way of this crack team as possible, allowing them absolute autonomy in this gem of a theatre-in-the-round.

Buckhurst’s creative team will be familiar to fans of his ‘pie-shop Sweeney Todd’, and they are every bit as successful here as they were in Tooting, the West End and on Broadway.  Designer Simon Kenny has provided a number of fascinating ‘clues’ to the show and what it might ‘mean’ in the paraphernalia he has assembled around the musical instruments on the petite stage.  Thus, while the room resembles a trendy Sixties nightspot, ranged around – below and aloft – with cosy bespoke armchairs and stools by Race Furniture, the performance space nods towards ‘The 1001 Nights’, ‘Ulysees’ and other emblematic signposts of Western Culture: more than that, drawerfuls of Scotch, Irish and American whisk(e)y are produced, and served to the lucky few in the crowd through its duration, while an artful ‘brindisi’ urges us to quaff it with its ‘four friends’.

In fact, the longer you stay with the beautifully written, endlessly surprisingly constructed songs, threaded in and out with cunning inter-relations and ringing with echoes of each other in intriguing ways, the less you find a single narrative and the more you are drawn into ‘pensive or reflective mood’, subsumed into its kaleidoscope of tones and sensations.  Then, about an hour in, it dawned on me, on this evening that the Evening Standard was screaming about Boris Johnson being umpteen points ahead in the election campaign, that this is probably the last place on earth one would expect to find such a person: he, and his kind, may not find that they have much in common with this warm-hearted, generous, aesthetically sublime and morally permissive broadside.  Conceived at the moment of Trump’s ascendancy in the USA, it is hard not to see in it a vehement declaration of pluralist, compassionate, liberal values – in other words, everything with which somebody like Trump (and that is – is it not? – precisely what Johnson tries to be) would have little in common. 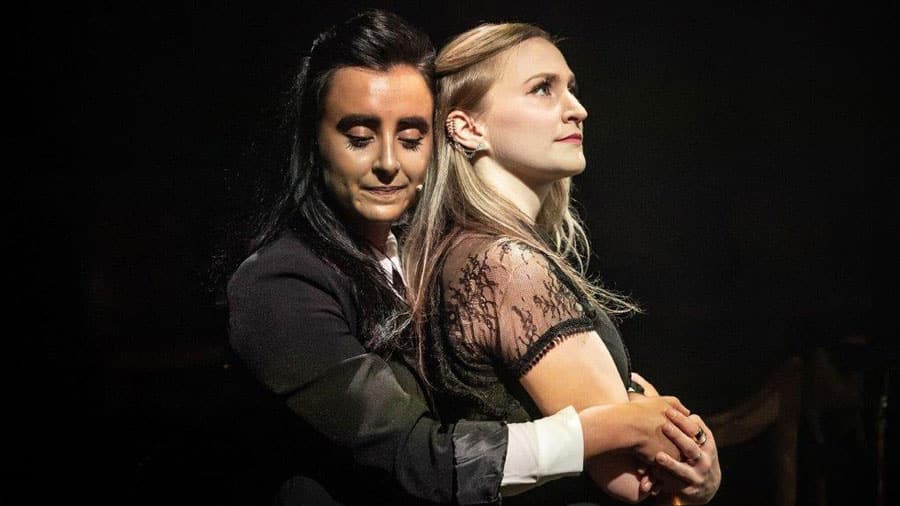 Thus is this theatre a place to escape – for the time being – all that is ugly, soulless and hurtful in our contemporary, shrinking England.  Taking us into this special realm are four performers whose achievement is – ultimately – to have the audience not only drinking out of their hands but also playing their song.  Niccolo Curradi, a familiar face in quadruple-threat land, initiates the march into this miraculous terrain with his warm baritone, cello held up in his muscular arms; he is followed on by mezzo Maimuna Memon, who – once again – is dazzling with her fabulously clear and full-bodied voice (David Gregory’s sound design is impeccable, and doubtless helped no end by top-of-the-game tech in this venue-of-venues), as well as in her dramatic command of the stage; then Zubin Varla brings his Shakespearean, authoritative tenor to the keyboard, where he shows himself equally at home with Thelonious Monk (one of Malloy’s most revered idols) as with the rest of this exquisitely varied score; and, finally, Carly Bawden rings out the top notes of the quartet with her pearlescent soprano, at times recalling – as indeed does the writing – the limpid qualities of Joni Mitchell or her namesake (?) Carly Simon.

After an hour and a half, in which time seems to stand still, we find ourselves suspended in a kind of musical ‘Southern and Northern Gothic’ landscape, where semi-mythical figures drift in and out of our vision, momentarily arresting us with candid revelations of their private lives and hidden desires, regaling us with histrionic analogies and obscure, Twin-Peaks-like confessions.  I didn’t see any CDs of the show on sale in the foyer as I made my way out, but I’m going back again tomorrow to see if I can find out where to get one.  And to experience, again, the magical world that is this adorable, priceless experience of heaven, temporarily resident in Soho for barely the price of a round of drinks.