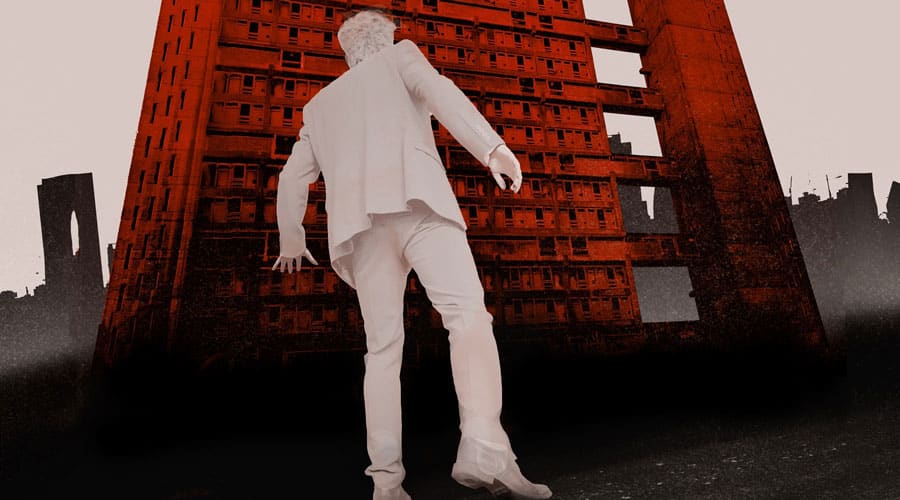 A young man discovers that the past is not easy to bury in Tristan Bernays’s chilling new play, Ghost House, which is having its world premiere at Vault Festival. He has moved into a stunning new apartment in a 1960s Brutalist council block converted into a luxury tower in Poplar in east London, with spectacular views of the city and LED lights in every kitchen cupboard. But as the cracks start to show in his own seemingly perfect life, the ghosts of the past start to crawl back despite the gentrifying veneer of designer fittings and pristine off-white walls.

Like the best ghost stories, it is not clear, or important, how much of the supernatural goings-on are real or conjured up by an unsettled mind. In a strong solo performance by Victor Alli, the young man is adjusting to a new life after the loss of his mum and a difficult break-up. It emerges that, despite a high-flying job in banking, he is socially awkward and lacking close friends, leaving him vulnerable to whatever lies beneath the surface of his spotless new home.

Sound designer David Gregory has created an ominous soundscape of crackling static and muffled conversations, with Ryan Day’s flickering, pulsating lighting heightens the spooky atmosphere on Luke W Robson’s set. But Ghost Story is more than just a spine-chiller – and my spine was definitely tingled at certain points. It captures the horror of urban isolation, of being surrounded by millions of people and possibilities but being totally alone. This is a world where old and new London sit uncomfortably together, where close-knit communities are being destroyed by gentrification and former family homes stand empty as property investments.

Under director Andrew Twyman, this is a tautly paced piece that builds slowly towards terrifying horrors sharply imagined by Bernays’s writing. Voices including Miriam Margolyes’s play small but crucial parts but Alli’s assured storytelling keeps you gripped as he pulls us into this nightmare vision of urban life.