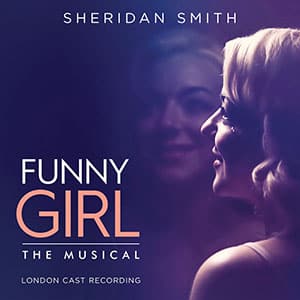 Decca have just released the cast recording of the London revival of Funny Girl which is currently playing at London’s Savoy Theatre with Sheridan Smith in the role of legendary comedienne Fanny Brice. Originally presented on Broadway in 1964 and then in London in 1966 with Barbra Streisand, it is difficult to believe that this production staged by The Menier Chocolate Factory is the show’s first scale revival EVER!

Even Jules Styne admitted that he had written a score so tough that only Barbra could sing it. This production redresses the balance and allows Smith to show off her comedic talents, breaking free of the original production.

Fresh with book revisions for Harvey Fierstein and brilliantly staged by Michael Mayer, this cast recording captures much of the magic that made Funny Girl an thoroughly enjoyable night in the theatre.

There is just no way that Sheridan Smith was ever going to escape the inevitable comparisons with Streisand, but this cast recording only highlights that Smith and Streisand are two very different artists, and what Smith brings to this recording is unique and compelling. You can hear Sheridan’s personality in this recording, this is no sterile studio recording, you can hear her smile and the comedy of the show comes across in droves. Sadie, Sadie, His Love Makes Me Beautiful and I’m The Greatest Star are triumphs, whilst Don’t Rain On My Parade still has the wow factor.

Darius Campbell, with a voice that has the smooth vibrancy of Nat King Cole, is definitely leading man material here. His Nick Arnstein retains the sexy integrity he had onstage and his duet You Are Woman, I am Man with Smith is just perfect, whilst Temporary Arrangement comes across brilliantly in this recording ( it’s also the first time any recording has featured this song which was cut from the original production, recorded by Sharif for the film – but then cut again!). Campbell is fast becoming a really credible musical theatre leading man, and this recording builds on that.

Joel Montague’s Eddie Ryan comes to this recording complete with tap break – superb! and the ensemble numbers sparkle. Cornet Man, If A Girl Isn’t Pretty, Henry Street and Who Taught Her Everything She Knows are just great. In fact, you sit listening to this recording wondering just why it took fifty years to be made.

Looking back at old Playbills, you realise just how big the original pit orchestra was for the Broadway production of Funny Girl, so you have to take you hat off to Chris Walker (New Orchestrations), and Alan Williams (Musial Supervisor and arrangements) and the Funny Girl band. The score is vibrant, zesty and incredibly fresh and beautifully played. The inclusion of some of the intro dialogue for songs like Don’t Rain On My Parade are wonderful touches.

SEE SHERIDAN SMITH IN FUNNY GIRL AT THE SAVOY THEATRE

FIND OUT MORE ABOUT THE FUNNY GIRL UK TOUR

READ OUR REVIEW OF FUNNY GIRL