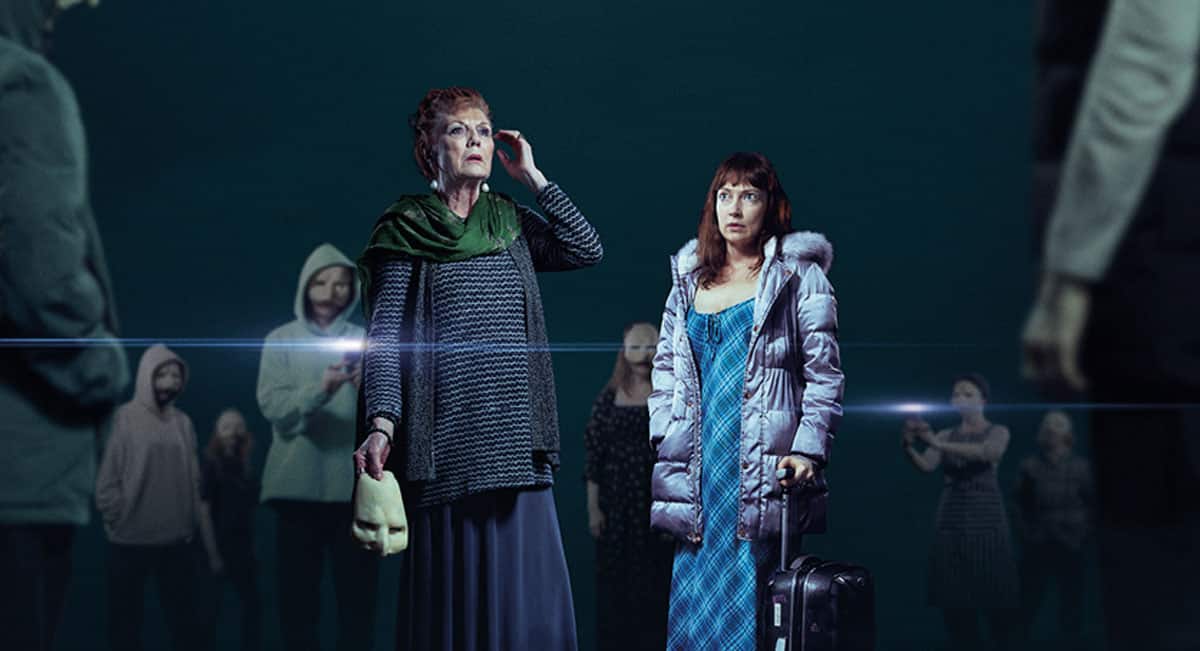 There are women who, seeing a friend in an almost-good outfit, cannot help reaching out: adjusting a belt, removing an ill-judged frill, suggesting a hat.  Some new plays make you feel like this, and it probably annoys writer and director as much as those interfering fashionistas annoy wearers.  But I can’t help it in this case: Tom Ratcliffe’s play, directed by Madelaine Moore, could be brilliant, and grow bigger.

For I approve the theme, really love the carnival- brutality of the way it’s framed with Punch-and-Judy figures, and adore the live, beautifully-judged score of accordion, fiddle folksong and the rest, which is by Michael Crean perched up top as a one-man band,  half-seen and sinister in an executioners’ mask. Moreover, Ratcliffe’s conclusion is twistedly fine, just when sentimental watchers expect an easy romantic redemption and are rightly denied it.

The problem is with the underworked text itself:  there’s a strong central theme of  the public judgement of people in horrible cases (in this case, a woman who gave her child-killing partner a false alibi and served time for it).  Forgiveness is difficult in an age of sensational media reporting, and mob condemnation online just to clickbait-easy. Nicola Harrison’s Evelyn is a newcomer, under a false name,  in a seaside retirement village. She is lodging with the slightly eccentric, affectionate Jeanne ( Rula Lenska, no less) who is on the edge of coming dementia.   But the rumour mill – nicely evoked with echoing scraps and projections of whatsappery and next-doorism – is going to get her. Yvette Boakye as an amiable single mother nurse fears, crazily, for her own child;  her brother (Offue Okegbe, a strong interesting performance) becomes fond of her, at one point  – the best writing in it – offering a tantalizing possibility of individual acceptance.

It is framed strikingly at the start  – and occasionally throughout –  by three of the figures in garish Punch and Judy show masks telling the story (the croc is particularly sinister).   Our seaside after all is most famed for these violent baby bashing puppet shows.  So overall, great idea.

But the longer first half often fails to grip: Lenska is not given enough chance to do what she does best and go over the top: too mumsy.  Her best line is when she explains why she rents the room so carefully  – “Don’t want some twentysomething doing horse tranquillizers in my bathroom”.  But…it drags. Only in the second half  does the play at last fire up:  Harrison,  understandably pianissimo in the first part, shows real pain,  Okegbe is quietly, heroically humane.   And the score even better than before.