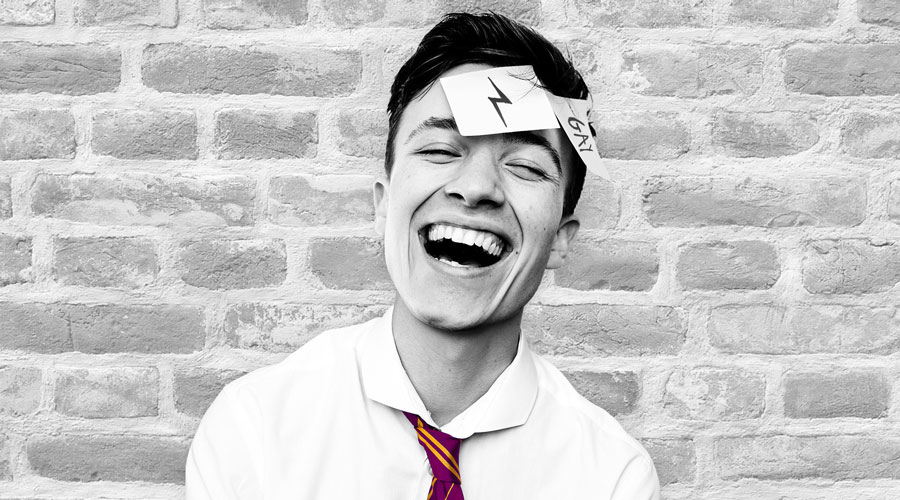 Robert Holtom’s witty, beautiful and heartwarming play dives deep into the world of Harry Potter and its fan base. Full of references the average Potter fan will recognise, Jack hates French, got sorted into Hufflepuff and he’s in love with his best friend Ollie. He has a secret weapon though, a Time-Turner, that allows him to travel back in time and change events. So, we join Jack, Ollie and best friend Gemma as we experience the same events, from teenage years to early twenties, three times. What will change?

Affectionate towards J.K. Rowling’s work, the audience lapped up every Potter reference and criticism, but the beauty of this piece is that it never shies away from homophobia, and the intense bullying teens suffer. The three performers work so well together, and the multi rolling is excellent and spot on. Alex Britt is superb as Jack; he has a warmth and openness that welcomes the audience into his world. Charlotte Dowding is outstanding in a variety of roles, but I particularly adored her French teacher Madame Dubois, who turns out to be a fierce queen, and Max Perry is equally excellent as Ollie, and a variety of roles, from Jack’s tongue-tied Dad, to a plethora of pickups in Heaven. (The legendary gay night club, not the mythical place of eternal happiness. Or…maybe?) I loved the range of characters, and Old Norman becomes a pivotal figure in the campaign for equality, a sensitive and beautiful device.

Tom Wright’s tight, zippy direction, keeps the gags coming fast, but also lets the play pause and breathe, and reflect on abuse and pride with considerable measure.  But this all stems from Holtom’s wonderful script, which becomes a rallying cry for equality. The time turning device enables him to present multiple points of views towards Jack’s homosexuality, and, much as Dumbledore helped many isolated young people feel stronger, his play deserves to be seen by the widest audience possible. It’s an absolute gem, don’t miss it!