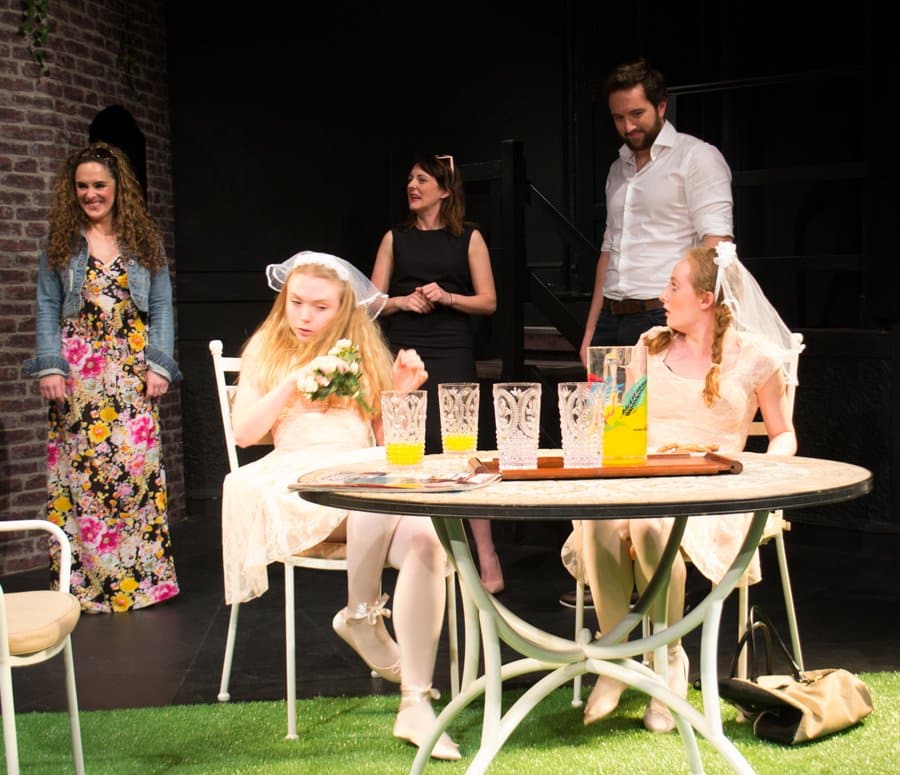 The little studio space tucked away around the side of the titanic New Wimbledon Theatre is fast becoming one of the most valued jewels in the crown of ATG’s rediscovery of forgotten or neglected classics and the development of new work. Offering a programme that is the equal of anything that you will find at, for example, Trafalgar 2, this simple black box venue has once again been the scene of a major re-encounter with one of the finest creations by one of this country’s leading living dramatists. Alan Ayckbourn’s 2004 autumnal, Chekovian, bitter-sweet tragi-comedy for The Age of the Celebrity bursts upon the London stage with breath-taking power and dazzlingly virtuosic technique. Although, in recent years, the West End and the National have all revisited established – and popular – Ayckbourn dramas, they haven’t shown us anything as good as this.

So, who is responsible for this uber-achievement? It might interest readers to know that – not for the first time – British theatre turns for its salvation to… actors. In this case, Martin Rossen, currently with the company of ‘An Inspector Calls’, takes up the mantle of producer (with co-producer, David A Ambrose), while the ‘legendary Dame’ Paul Tate, directs. Now, right away we have to point out that neither of these gentlemen has done this before: they are making their debut in these new functions. And they have not chosen an ‘easy’ work to start with. In fact, they could hardly have chosen a more difficult play to attempt. This is one of Ayckbourn’s most tonally surprising and unstable works; technically it is also one of his most sparingly and yet also elaborately written, combining apparent thinness of dialogue with intricately complex plotting, where motivation and reactions are typically merely suggested with the most delicate of shading, with hints, or shadows of meaning. Where, despite all the chatter, silence is often much more eloquent than words, where repetitions never mean the same thing, where broken, incomplete phrasing lands like a fist slammed on a table. 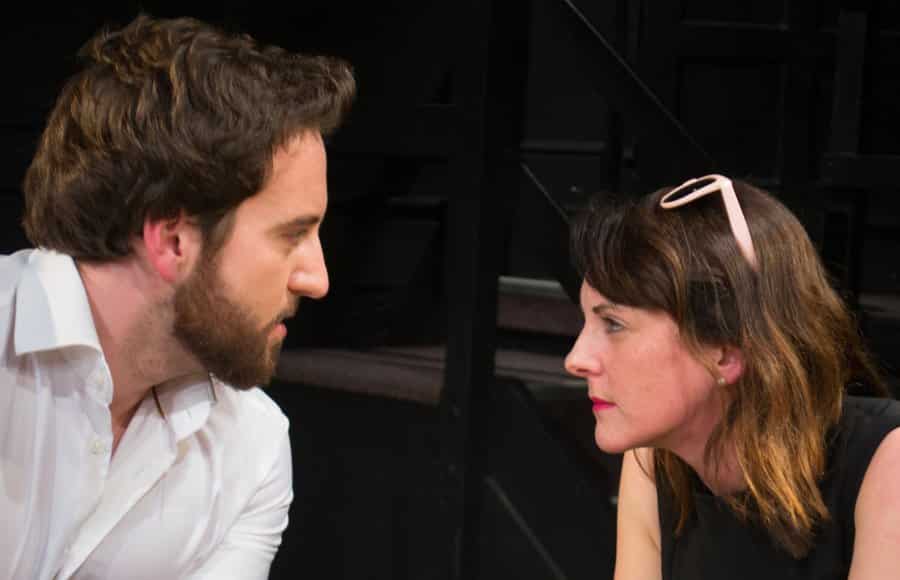 It presents a fearsome challenge to actors. Perhaps one of the reasons it’s not done that often is that you have to cast it – and play it – as you would Sheridan, or Congreve: and managements, for whatever reason, often shy away from that kind of hurdle: there are too many things that can go wrong with such programming. Earlier Ayckbourn, on the other hand, is – apparently – simpler fare, where actors can be cast to play ‘as type’. And so that is what happens. Cardboard, two-dimensional characters are trotted out, mouth the lines, and vanish. Surely, in recent years we have seen enough of such revivals, with stages filled with actors denied the possibility of being able to do the work justice, and instead having to project a catalogue of vacuous ‘types’, ever to want to have to sit through another?

This, by bold contrast, is what Ayckbourn can be, in the right hands. Tate and Rossen have assembled a company that is perfectly suited to the characters in this tawdry story of celebrity lifestyle shenanigans. It is one of the production’s many masterstrokes to have the trained singer, Blair Robertson, take the central role of Charlie Conrad: a media invention, a non-entity in his own right, a man who has had fame thrust upon him for being a perpetual loser, preternaturally inept, ignorant and careless of his own limitations, who is given by Ayckbourn terrifyingly long speeches of seemingly meandering inconsequentiality. In lesser hands, this character would just disappear into a puff of inanity. But Robertson knows what to do with the part: he treats the character’s speeches like endlessly turning and rotating Handelian or Mozartian arias, where melodies are splintered into their constituent fragments, which are then pored over, sifted, examined, sorted, and packed away with cool yet humanely compassionate care. Thus, he endows the character with intelligence to counter-balance his striking physical presence and makes the audience believe that this person can be both (a) popular in the public eye in the story and (b) the central point of this lengthy drama. 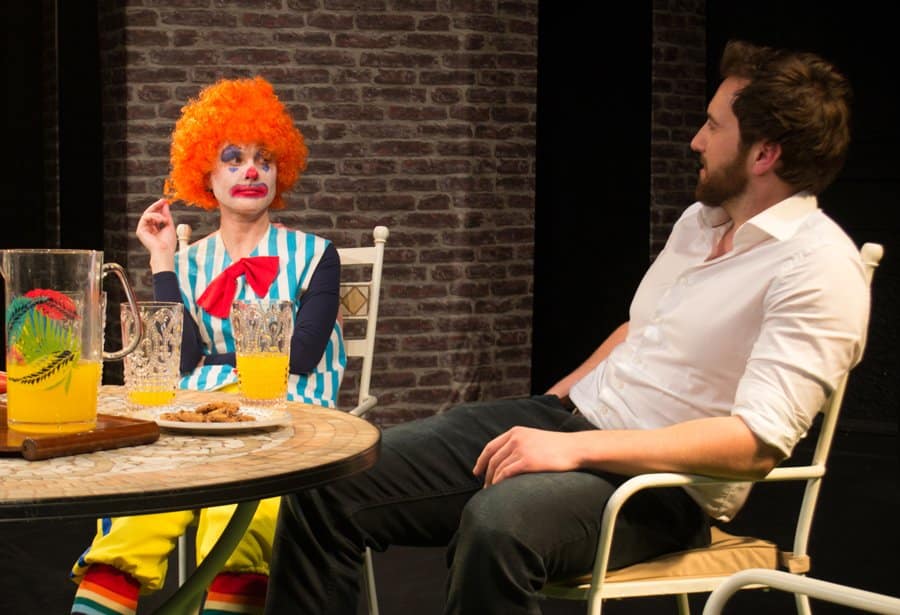 His spouse, Linzi, is the fascinating Janine Pardo, who begins the story as the capable organiser of her spectacularly successful husband’s life, and who has grown increasingly frustrated and unfulfilled in that role. Her journey is dynamic and inspiring, as she gradually liberates herself and recreates her life. Charlie’s problem is that he never really knows who he is, and – by association – he never really knows who anybody else is, either. Including the woman he’s married to. Unable to communicate this, even to his suave agent, Jason, the handsome presence of Malcolm Jeffries, he reaches out clumsily, first to cunning celebrity journalist Gale Gilchrist (the all-too credible and frenzied Louise Devlin), and then – fatally – to the faux-innocent mime and male-clown-impersonator, Marsha Bates (Olivia Busby, whose Salome-like shedding of ‘veils’ of disguise through the production is one of its chief glories).

Aiding and abetting this tangled web of relationships are a pair of celebrity lawyers. They are, first the dapper and relentless Hugo (Philip Gill, who milks his one absolute peach of a scene for every delicious twist and change of mood and manner, and also threatens to walk off with the show in the ‘mock trial’ that opens the second half), and then his slightly less effective, but tolerated sparring partner, Simeon Diggs (John Craggs, wonderfully ending up doing as much damage to his client as his opponent Hugo does). The four ingeniously constructed acts that play out upon the same mock-baronial terrace outside the Conrad pile are punctuated by the last of the two roles in this classically-minded cast of 9: Frida Strom is ‘Laura’ and Ellie Ward is ‘Katie’: they are two high-spirited girls who begin and end each of the phases of the drama (except its termination) by rushing around like a pair of screeching harpies, boding no good whatsoever: devoid of intelligible speech, confined to laughter, giggles, shouts and gasps, theirs is a brutally aggressive effect, and one which is vital in establishing the harshness that underlies Charlie’s charmed and picturesque existence.

Other parts are named, but never appear: the Conrads’ children, whose party is the cause of the arrival of the destructive catalyst Marsha, the children’s entertainer who shares a surname with the proprietors of a certain notorious motel; and there is Gale’s drug-dealing girlfriend, whose prosecution and incarceration finally expose Gale’s heart and reveal the soul struggling with its vulnerability underneath with an honesty that is, plainly, unavailable to Charlie. Hugo, having used a revelation of his own homosexuality as part of his armoury to break down Marsha’s case, later reveals to us Imogen, whom we are to assume is his wife. All the characters around Charlie are carefully rationing how much we do or do not find out about them, underlining his incapacity to manage his own passage through life with anything like the same control. Each element of the play is absolutely essential: take it away, and the story would suffer. If it is there, it is because it needs to be. This is playwrighting of the highest order.

It is presented on a simple but handsome set by Natalie Foy, costume supervision (unerringly spot-on) is by Emily Howard and Tom Coombs provides the unassuming but effective light and sound.

If there is any point where, perhaps, the script slightly gets the better of its interpreters, then it is possibly to be found in the closing episode, where Charlie seems simply to disappear. However, this is all prepared for. He does indeed speak at some length upon just this very subject earlier in the play, in just about his most focused and introspective moment, where he seems – fleetingly – to grasp what his life is all about. But, by then, the audience has already seen several other characters ‘disappear’: some have drifted away, others have ascended into the fame and celebrity once enjoyed by the lead. So, in the end, perhaps ‘being there’ is as much a question of arbitrary randomness as it is about anything more defined, planned, hoped or wished for, or feared. In this way, Ayckbourn closes his strangely affecting and beautiful tragi-comedy of the modern era. Thank heavens Rossen and Tate are there to open it up to us again.

This play ran for a single week at the New Wimbledon Studio. If anybody wishes to enquire about extending its life, please contact the producer at his company, Bournyack Theatre Company.