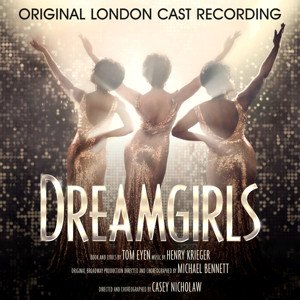 It took 35 years for Dreamgirls to arrive in London’s West End, but arrive it finally did, exploding and proving to be as popular with audiences now as it was when it first opened on Broadway. Henry Krieger’s score and Tom Eyen’s book and lyrics have withstood the test of time and are as powerful as ever.

This new double cd recording represents the incarnation of the show that is now being performed nightly at the Savoy Theatre. Following the success of the film adaptation of Dreamgirls, modifications and new sections were written for the stage show resulting in a production that is an absolute showstopper in every respect.

Recorded live over several performances in February of this year, this recording of Dreamgirls benefits from the audience dynamic and is incredibly faithful to what you would hear as an audience member if you were sitting in a premium seat at London’s Savoy Theatre. The other noticeable thing about this album is that having had a few months of performances, there is a maturity and level of security in the vocal performances of the cast.

Amber Riley is nothing short of stunning as Effie White on this recording. Her interpretation of And I Am Telling You I’m Not Going, I Am Changing and One Night Only are nothing short of breathtaking. The new version of Listen with Riley and LaFontaine duetting is a knockout.

The performances of Joe Aaron Reid (Curtis Taylor Jnr), Olivier Award-winner Adam J Bernard (Jimmy Early), Liisi LaFontaine (Deena Jones), Ibinaro Jack (Lorrell Robinson) and Tyrone Huntley (C C White) go to show what an exceptional cast Casey Nicolaw and Sonia Friedman were able to assemble for this production. Each and every one is a star turn in its own right.

Nick Finlow’s superb show band are every bit as funky and soulful as you get in the theatre, it’s all balanced to perfection and you can hear the pain, the joy and the exuberance of three girls who set out to be famous.

What struck me most about the stage show was how carefully Michael Bennett and now Casey Nicholaw had crafted the theatricality of Dreamgirls. That theatricality comes across in this recording. Every moment is palpable.

I can’t see Dreamgirls going anywhere (except perhaps Broadway) anytime soon. This new recording serves as a first-class calling card for Casey Nicholaw’s exceptional production. If you loved the show then you are sure to love this recording, if you’ve not seen it, get a copy and listen, but be prepared to go straight out and buy a ticket.

At a time when recordings of London musical theatre productions are thin on the ground, this is a five-star recording of a sensational evening in the theatre and it is to be savoured. It’s “Showbusiness” at its very best.

PRE-ORDER A COPY OF THE DREAMGIRLS LONDON CAST RECORDING

BOOK NOW FOR DREAMGIRLS AT THE SAVOY THEATRE