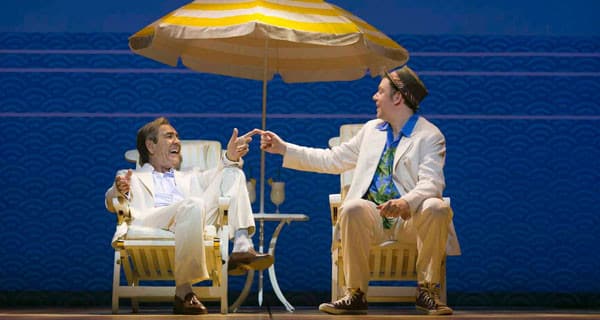 Productions of new musicals (or even not-so-new musicals which have never been produced professionally in a particular city) offer many challenges, the greatest of which is how to attract audiences, but they also afford real opportunities, as does all new theatrical work. Sometimes, admittedly rarely, new musicals give birth to new stars, new forms, or allow creatives to move in new directions.

Now playing at the Savoy Theatre is Jerry Mitchell’s production of the 2005 Tony nominated Jeffrey Lane (Book) and David Yazbek (Lyrics and Music) musical, Dirty Rotten Scoundrels. Mitchell was originally the choreographer but has stepped up to the director’s hot seat for London, while still choreographing.

The revelation here is Samantha Bond, an actress well known for television, film and stage work but not musicals. One would never know it. She takes to the form like a hipster to Shoreditch. Poised, elegant, awash with charm and completely on top of every aspect of her dialogue, singing and choreography, Bond is an absolute triumph. Every time she appears on stage, she brings a smile to your face and the anticipation of joy – and every single time, she delivers.

Bond’s dialogue is crisp and clean and she lands every laugh line. Importantly, she understands every scene and plays them honestly and truly, but with a wink to the broken fourth wall that is one of the show’s conventions. She is unrelentingly funny and infectiously spirited. Don’t miss her smorgasbord line or her exit line for Act One. She may not be a traditional Broadway belter, but she does not need to be; she is perfectly in tune and sells each song, critically, with ease and commitment. And she can dance too. She is an unmitigated triumph. Her performance alone is worth the admission price. Long may she grace the musical stage.

As her partner in mischievous romance, John Marquez is perfect: dim, erratically suave, frenetic but charming, he radiates affability. And he is funny – sometimes quite unexpectedly so. There is an exit with a hedge helmet that is irresistible. He works perfectly with Bond and together they effortlessly bring essential warmth and empathy to the piece. His very fine baritone is welcome too, a lone voice of masculine power.

As the title suggests, this is a musical comedy about conmen and is based on the film with the same name. Lawrence is the king of the con in a strange, apparently time-and-era-less fantasy Riveria resort. He makes a sumptuous living seducing and deceiving rich women or stupid women with access to fortunes (such as Bond’s Muriel). The chief of police (Marquez) is in his pocket and he makes sufficient cash from his roguish activities that he can donate to charity.

But his world is disrupted when he learns of the activities of “The Jackal” a rival on the scene and when he encounters Freddy Benson (and uses him to escape a tricky situation with a determined Southern heiress, Joelene Oakes) he determines to get him off his patch. A bet is made – whichever of the two can swindle $50,000 from a chosen mark (Christine Colgate) must leave and never return. The ensuing antics, where each tries to out-think and out-rogue the other, provides the focus of the piece. In the way of these things, it turns out not to be quite so easy for Lawrence to triumph.

This is a musical farce. No question. And a very funny one. But it has a conceptual twist: the fourth wall is broken allowing asides to or with the audience or conductor, or wry, deftly done onstage business. Accordingly, it requires strict discipline, controlled playing and a complete understanding of the style of playing necessary for success. Perfect diction, centred performances absent self-indulgence, generous ensemble playing – these are the cornerstones necessary for the truthful performances which will set the hilarity free.

Both Bond and Marquez understand all this, which is why their characterisations are so consistent and excellent.

The ensemble understand it too. It is as vibrant, energetic and committed an ensemble as any seen on a London stage and much more so than some. No matter what silly business they are doing – and they do a lot of silly things – they are serious about it, determined to perform in happy unison and to radiate enthusiasm and brio. There are some absolute standouts: Dominic Tribuzio, Javier Santos, Niamh Bracken and Genevieve Nicole. And it is worth the admission price to see Ian Knauer and Andy Conaghan emerge from behind a hedge, like some modern riff on Herbert Lom and Bela Lugosi, as sailors bent on violence.

Katherine Kingsley brings elegance and grace to the role of Christine, the mark that Lawrence and Freddy focus on. She looks fabulous, dances with skill and ease and sings exceptionally well. It is hard to play a dumb victim convincingly, but Kingsley manages well, and especially admirable is the way she does not signal the eventual fate of her character while, at the same time, leaving clues in plain sight. Her final appearance in hot pink is enchanting and intoxicating. It’s a classy turn.

Not so classy, and slightly incomprehensibly excessive, is Lizzy Connolly’s Joelene Oakes. The character is too extreme, the performance too over-the-top to either fit in with the rest of the cast or to hit home runs in the humour department. It is very odd. But it is as out of kilter as the other solo female performance, Lisa Bridges’ deranged usherette, a triumph of noise over articulation.

Both Robert Lindsay (Lawrence) and Rufus Hound (Freddy) seem to be in some other production entirely and, for the most part, seem in tune only with each other, giving the false impression of great stage chemistry. Both mumble, sing badly, miss laughs, take from but do not give to their fellow performers and, unforgivably, openly laugh at each other on stage and corpse without compunction. They are as undisciplined as desperate shoppers rushing through the doors to John Lewis on Christmas Day. It is another example of star casting gone stupendously off-piste.

In Lindsay’s case, it is unforgivable. Hound is just not skilled enough, either musically (he can’t sing nearly well enough for this role and, unlike Bond, he cannot sell a number) or as an actor, to create the delicious goofy charlatan that Freddy is. So he needs guidance, support, a model to follow and from which to learn. But Lindsay eschews that role, preferring instead to try to make the show all about him (Newsflash: it’s not!) and wallowing in self-indulgent, self-important, smarmy shallowness when he should be a triumph of charm, sophistication and ease. Alarmingly, he is more Sid James than David Niven or Rex Harrison.

It is as if Lindsay does not like or trust the material. He plays against the comedy, seeking the spotlight. He refuses to maintain his various accents, despite the fact that to do so with precision and speed would generate laughs in its own right. Sometimes he appears to think he is still in Me And My Girl. He is a spectacular disappointment.

The piece itself is a frothy, enjoyable confection and Yazbek’s score contributes in no small way to that. Much of it goes to Lindsay and Hound and so one never hears it sung properly or treated with respect, but it is catchy and joyful music. Kingsley, Bond and Marquez squeeze the magic out of every note and it’s a pity the male leads did not follow suit. Richard John conducts the small band with verve and the sound they generate together is rich and grand.

Peter McKintosh’s sets and costumes are gloriously camp and set the scene for frivolous fun with great style. There are, however, a number of bizarre wig malfunctions and dress-too-short moments; Kingsley is forced to push her skirt down almost every time she moves quickly. Even so, the audience knows more about the female cast’s underwear than is necessary in the stalls of the Savoy Theatre. And on at least one occasion, a set change was so clunky that Lindsay felt inclined to make a meal of it in one of his excessive half-connects with the audience.

It is difficult to tell how much responsibility Mitchell should bear here and more difficult to be convinced that he is the director this show, or any show with any kind of complexity, needs. The dances are terrific, really terrific. But there is no coherent style in the performances, no attention to detail and no precision; unforgivable errors in a piece as tricky to pull off as this.

Still, with Bond, Marquez and Kingsley and a truly trim, taut and terrific ensemble, there is a lot here that Mitchell has presided over which rocks. It’s just that the titular scoundrels play dirty and give rotten performances – unfathomably and unexpectedly.

Book tickets for Dirty Rotten Scoundrels at The Savoy Theatre