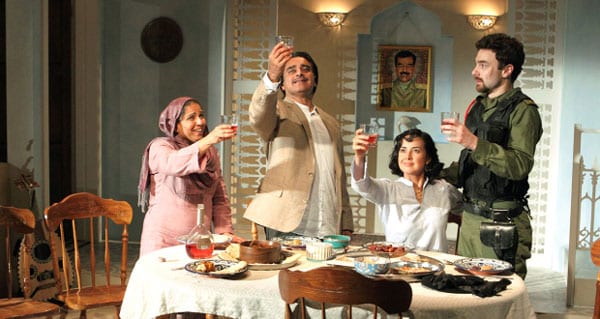 Now playing there is Lindsay Posner’s production of Anthony Horowitz’ new comedy, Dinner With Saddam. Neither is distinguished by this occurrence.

In an age when people are loudly disparaging of Trevor Nunn for casting Shakespeare only with Caucasians, it seems, at best, surprising that a play set in Iraq about local Iraqi people and real historical Iraqi figures should feature a cast with few, if any, Iraqi actors.

Equally surprising, though, is how trite, tired, and terrible the dialogue is. Horowitz is a clever, canny writer, but that talent is deeply buried here.

When the climax to Act One involves a slapstick shovel-on-head knockout blow, a suit splitting across the central character’s back, and Steven Berkoff finally making his entrance, heavily made up as Saddam Hussein, you know that there is no point staying for the second Act. Nothing can make up for the time which you have lost while enduring Act One. Death is far too close, whatever your age, to fritter time away on profitless theatrical misjudgment. Fleeing is wise.

Given the amount of time spent on discussing a toilet blocked by a monstrous turd, it is not unfair to call the plot shitty. It’s apt.

Dad and Mum were forced to marry and there is no apparent love there. Mum does all the work; Dad reads the newspaper, laments his bad fortune, and insists she must comply with his wishes. They have basically no food and water in the house. Dad wants their only daughter to marry her cousin. The daughter is in love with an actor but Dad thinks acting is not manly. The cousin is odious and obnoxious (a traffic policeman who informs on dissidents to the Hussein regime and, therefore, impliedly marked for bad things to happen).

The actor pretends to be a plumber, presumably to prove to Dad either his worth as an actor or his manly capabilities, or both, and is given the task of fixing the blocked toilet. The daughter goes to an underground activist group and is given written propaganda. 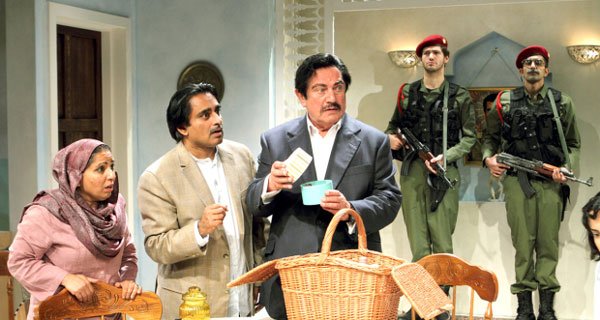 Superb actors could not make this Dumbo fly. Some of the cast here try valiantly and no doubt Berkoff makes a fine fist of impersonating Hussein. But the writing is misguided, and the overall result pointless.

The programme reveals that Horowitz set out to write the play because he was aggrieved about the Iraq Invasion and it’s horrific consequences. Alas, his play is but another casualty of the decision to invade Iraq, with the cast and audience candidates for emergency aid.

There is, however, a nicely designed set from Tim Shortall which gives you something to look at and consider as the tedious plot meanders towards oblivion.