You really begin to get the Christmas spirit when you go to your first pantomime of the year and Dick Whittington at the New Wimbledon Theatre is a real Christmas cracker with plenty to entertain the whole family.

For those who are unaware of the story from English folklore, the panto tells the tale of Richard Whittington who supposedly escaped poverty and made his fortune thanks to the abilities of his cat, later becoming a wealthy merchant and Lord Mayor of London. It’s worth noting that the whole story is dubious and varies depending on the source, but here in this pantomime version, Eric Potts has opted for a lively tale that had the audience laughing from start to finish.

This Dick Whittington presented by First Family Entertainment is a beautifully produced production that has wonderful sets and costumes. Director Ian Talbot has bought a wonderfully traditional pantomime to the stage with some of the countries greatest talents.

Most notably, it is this pantomime that has bought one of the greatest ambassadors for British Theatre back to the stage. The wonderful Arlene Phillips plays Fairy Bowbells, with her witty rhymes, sparkling gowns, jaunty dances and charm, it’s great to welcome her back as a performer whose style is unmatched.

Matthew Kelly and Tim Vine make for a wonderful duo as Sarah the Cook and Idle Jack. Matthew Kelly with his outlandish Dame’s outfits and deadpan one-liners perfectly match the fast-paced wit and laugh a minute antics of Tim Vine. Vine’s obligatory set with children from the audience also got huge laughs with some wonderful responses from the children themselves.

Matt Harrop as King Rat is a wonderfully Machiavellian baddy and his army of rat minions were suitably scary and certainly had the children in the audiences actively involved. Paul Baker’s Alderman Fitzwarren was a wonderful foil for Vine and Kelly, but his wonderfully Tubby and streetwise Sultan was superb.

Two pantomime virgins took to the stage last night and showed that they are certainly faces to watch in the future. Grace Chapman as Alice Fitzwarren and Sam Hallion as Dick Whittington were exceptional. Hallion’s sly smile and pop star vocals worked well with the beauty, and natural talent of Chapman. It’s a winning coupling and they certainly seemed to be having a ball – pings and all!

I can imagine that playing the role of Tommy The Cat can be a largely thankless task. The role which has the actress completely costumed so as to be unrecognisable must be a tough one, especially under hot stage lighting. Indi-Jay Cammish gave Tommy the balletic moves and presence to give this cat street cred and likeability.

Backed by an ensemble who danced like their lives depended on it and a wonderful young juvenile ensemble there was very little to fault with this production. A big round of applause to for Mal Maddock and his tight band who kept the music pace of the show running throughout and supplied more than a few tight sound effects for added humour.

Take your whole family to this wonderful evening at the theatre. It’s a perfect antidote to train strikes and some of the not so nice stuff going on at the moment. Indulge in two hours of ripping humour and great performances. Pantomime is a uniquely British institution and as an Aussie, I can honestly say it’s one of the things I enjoy about Britain at this time of year that very few others can ever replicate.

To take Tim Vine’s lead I’d say this is one slick Richard!

As a postscript to this review, may I just say thank you to the hard-working management and staff of the New Wimbledon Theatre who dealt last night with a medical emergency in the audience quickly and professionally. The level of friendliness and care shown by the venue’s staff on each of my many visits makes this one of my favourite theatres in London.

BOOK TICKETS FOR DICK WHITTINGTON AT THE NEW WIMBLEDON THEATRE 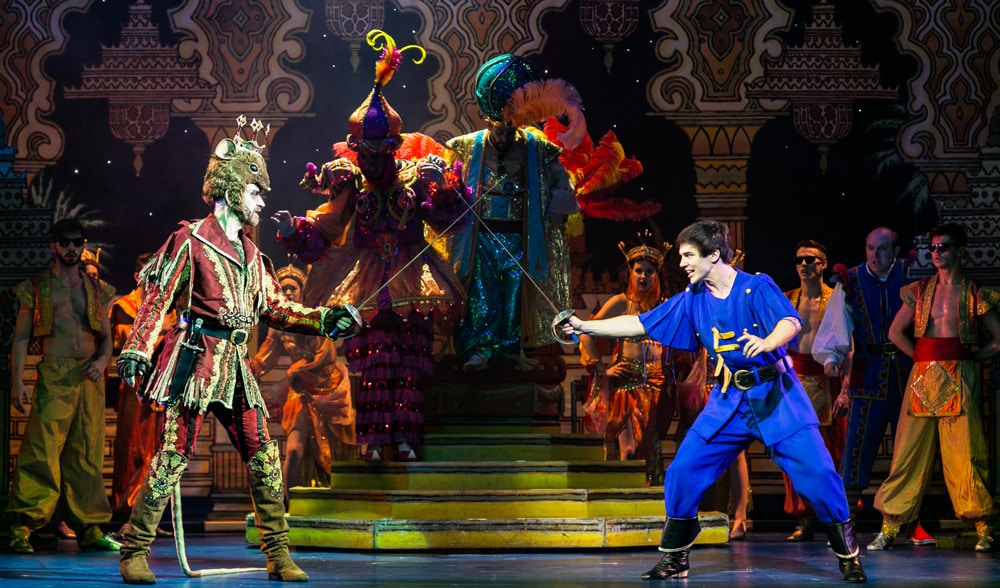