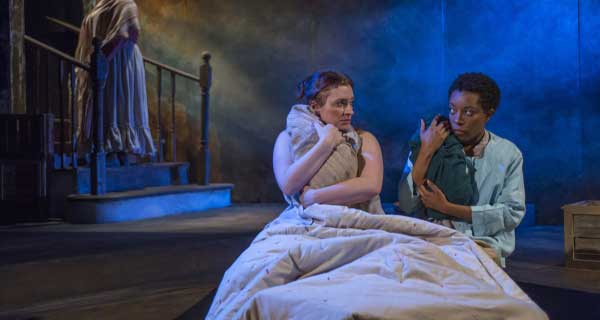 The recent closure of I Cant Sing has hung like a thick, awful, dark cloud over the West End. But, like all clouds, it turns out there was, indeed, a silver lining.

Because if it had continued to run (as it ought to have because it was really rather good) Cynthia Erivo would have been unlikely to be available to star in the European Premiere of Dessa Rose, a 2005 musical from the masterful team of Stephen Flaherty (music) and Lynn Ahrens (book and lyrics) now in previews at Trafalgar Studio Two, and that would have been a desperate disappointment.

Dessa Rose is a remarkably engaging piece of musical theatre which charts the life of two women from the mid 1800s to the early 1920s in America, mostly the South. Dessa Rose is born as a slave but by the time she is sixteen she has had a child, been sentenced to death and gone on the run. Her story is intermixed with that of Ruth, a white woman born into stately Southern graciousness and expected to marry well. She marries, but not well – and finds herself alone and abandoned by her gambler husband, a dysfunctional plantation her home.

The bulk of the musical charts the friendship which eventually grows strong between these two women, both of whom are remarkable, tenacious and wonderful in their own way. It’s almost a fable; at times, except for the fact that it is a tale about two women, you could be forgiven for thinking that Mark Twain had written it, such is the comic spirit and the raw, intense observations about the vicissitudes of life for women and African Americans in the Deep South in those decades where slavery was de rigeur and hope and harmony hard fought.

It’s funny and deeply touching in turns, and there are many turns before the tale is over.

Andrew Keates directs with a sure, clear hand. The production is spare and uncluttered, but never dull or confusing. The small space is used to the maximum and despite the extreme proximity of audience to cast, there is never any sense of awkwardness. There is an intimacy here which suits the text admirably and helps its shine and sheen.

Everything about Garance Marneur’s clever jigsaw-puzzle set works. The constant presence of hanging chains reinforces the underlying presence of the notion of slavery and they are used for a wide variety of purposes, some of which surprise, some of which serve the darker passages. The costumes (Phillipa Batt) all evoke the period splendidly too.

Dean Austin provides first rate musical direction and the small, unusually constituted band (keyboard, violin/mandolin, woodwind and cello), spread out across the extremes of the auditorium, provides excellent accompaniment. The cast helps with the percussion section, in an ad hoc way as the score requires it. So the whole effect of the music makes you think of campfires, group excursions and collaboration. The sense of common purpose is emphasied by the placement of the musicians. It’s a clever touch that pays dividends.

At the centre of everything, though, is Cynthia Erivo’s extraordinary and quite perfect performance as the titular character. She sings astonishingly well, full of pain and beauty; her diction and tone, clarion-like, rich and infinitely precise. And dramatically, she also excels. She is funny, humble, vengeful, vigilant, vicious, loving, sweet, observant and joyful – her eyes sparkle with energy and joy, and every time she steps into the light (and even often when she is there but hiding in the shadows) she energises proceedings and provides the throbbing heart of the work.

It’s a truly remarkable and mesmerising performance. Totally alive in every possible way.

She gets excellent support from Edward Baruwa’s Nathan, a giant of a fellow slave whose passion for freedom is almost as great as his heart and his willingness to enjoy life. His rendition of The Scheme in Act Two is one of the evening’s most satisfyingly entertaining moments.

As Ruth, Cassidy Janson gives a fine performance, especially in Act Two when she spends more time with both Erivo and Baruwa. The relationship she develops with Baruwa is especially delicate and truthful. Her sparring and eventual solidarity with Erivo is refreshingly awkward, candid and real. Vocally, she seemed a little reticent occasionally, but not sufficiently to be problematic. She has the vocal chops and the audience wants to enjoy them. Her harmonies with Erivo are memorably pleasurable.

Cassidy shares a glorious moment in Act One with John Addison, ever reliable; Bertie’s Waltz is a moment of real hope, expectant joy; and it sets up what follows for Ruth with ease. Addison plays a series of roles well and he is missed in Act Two when he has less to do.

Jon Robyns is, happily, playing well against type; his ambitious, selfish, bigoted fiend, Adam Nehemiah, is a villain of layered monstrosity. He builds the character delightfully, slowly revealing the lustful rapist and the deranged seeker-of-revenge. He sings with sneering accuracy.

There is especially excellent work from Sharon Benson, Miquel Brown and Abiona Omonua, all of whom sing with gospel singer gusto. And Alexander Evans provides a series of deft cameos all of which impress, from abusive plantation slave-owner through lecherous, rich toff to firm but kind and trusting Sheriff.

Really, there are no weak links in the ensemble. Everyone does what is needed and with a sureness and skill that should be more common on the West End but frequently isn’t.

Neill Brinkworth’s excellent and atmospheric lighting and Sam Spencer Lane’s choreography provide the icing on the cake. If there is a quibble, it is with James Nicholson’s sound design, but it is early days and no doubt the gremlins will be disposed of as the opening approaches.

This is a terrifically mature presentation of a difficult, but eminently attractive, and entertaining, piece of musical theatre. It is Keates’ best work to date and in Erivo he has a star of true power who delivers the goods in every way.

If you appreciate a good story, crisply told and gorgeously performed, then grab a ticket before it sells out as it surely must.

Book tickets for Dessa Rose at the Trafalgar Studios