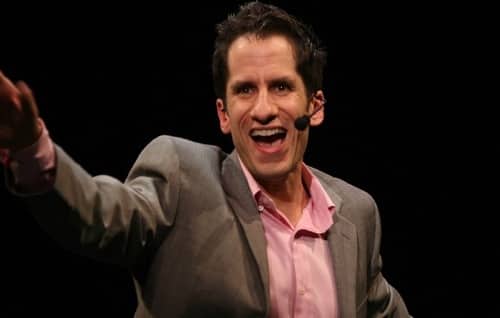 The Leicester Square Theatre has accommodated some truly special theatre in this occasionally Autumnal June. Patti LuPone and Seth Rudetsky’s audiences have been utterly delighted and have flocked back to the theatre (in some cases night after night) to experience yet more musical theatre thrills. Rudetsky’s Deconstructing Broadway seems almost the culmination of this not-to-be-forgotten period at number 6, Leicester Place.

He is blindingly brilliant. The throaty and wheezy-cough inducing laughter emanating from the audience is perpetual from the beginning to the end of this outstandingly talented man’s performance. If Seth Rudetsky was a sitcom himself, he would not require canned laughter.

It’s hard to clarify whether or not there is a rigid structure to the night (although there must be as the sound effects and projection cues in particular are of the utmost importance to keep this show afloat), but what is clear is that Rudetsky is a polished personality. He talks a hundred miles an hour, but is so gripping and articulate that one never fails to miss a word, he does not hesitate for one second, his comic timing is impeccable, his knowledge of musical theatre hiccups, divas, tidbits and general perception of The Business appears second-to-none, and the way in which he pulls all of these delightful aspects together and combines them with his sparkling personality to put on one of the most entertaining shows the audience have probably ever seen – positively genius.

What Rudetsky actually does in his show is pretty much what it says on the tin. He takes a look (whether that be through audio recording, visual clip or spoken memory) at some of Broadway’s finest, and sometimes most bizarre, legends and legendary moments and obsessively analyses each detail; literally each note, eyelid movement and gesture, and shares with us just how brilliant (‘Ah-MAHZ-ing’) they are, or how devastating and hysterical they are (‘Ah-MAAHHZ-ing’).

For any musical theatre fan, this is a night of sheer bliss. For anyone else it’s a night of comedy gold. The man does not put one pointed foot or lip-singing Barbra Streisand facial expression out of place in this absolutely phenomenal night at the theatre.