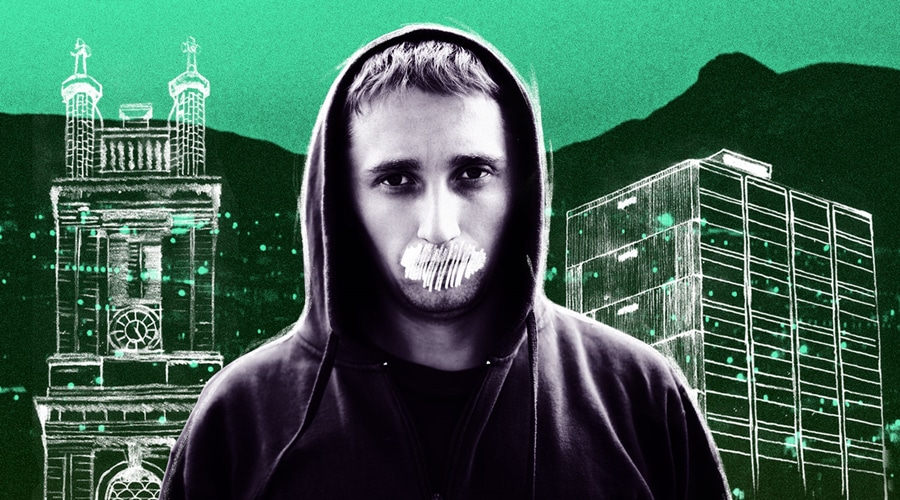 Declan.
Streaming now until Sept 3rd as part of the Traverse Festival.
5 Stars

Huge congratulations to the Traverse Theatre for programming their new space, Traverse 3, an online festival that will run throughout the year. Instead of us going to Edinburgh, the venue brings the festival to us, and there are some mighty productions coming our way. Kicking off, for me, is Declan, adapted from Kieran Hurley’s extraordinary Mouthpiece, seen at the Traverse last summer.

Rarely have I had such a visceral, emotional response to a play as I did being in the audience of Mouthpiece.  Beginning at Salisbury Crags, a middle-aged woman steps forward to fall to her death, but she is saved by a teenage boy. From that moment Libby and Declan form a friendship, fragile at first, but growing as Declan begins to trust her, and he begins to experience art and glimpses of another life. Libby is a failed writer, and she spots an opportunity in the despair and chaos of Declan’s life, in his artwork and stories, and she begins to appropriate his story and her star begins to rise as his life falls apart.

Told now almost exclusively from Declan’s point of view, Lorn McDonald’s superb direction takes us to the locations in the play, (and you will have a Proustian response if you have been to any of them, especially the wonderful Traverse Theatre), puts us firmly in Declan’s shoes, and sensitive animation by Nisan Yetkin and text from the play link the story together seamlessly. At the centre is Angus Taylor, reprising his tour de force performance as Declan, angry, sweary, hopeful and heartbreaking as he tries desperately to rewrite his story. You have a chance to catch his superb performance now or marvel in it again. Kim Moore’s sound and composition suit the piece perfectly, and, although theatre online is still not technically theatre, the whole live experience has been distilled into this superb film. If you’re becoming weary of watching plays online, get over it and experience one of the Traverse’s best productions of recent years.

You can watch the play for free but if you can make a donation it will help support the artists throughout the festival.