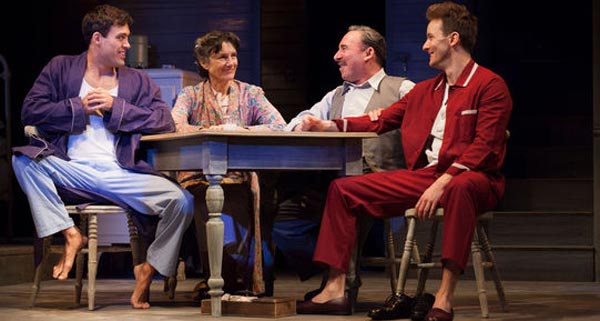 Death Of A Salesman has now transferred to the Noel Coward Theatre where it is running until 18 July 2015.

These are among the final lines spoken by Harriet Walters’ Linda in Gregory Doran’s revival of Arthur Miller’s play, Death of a Salesman, which is currently playing at the Royal Shakespeare Theatre in Stratford Upon Avon, prior to a West End transfer.

They are almost apt to describe one’s own reaction to the revival itself.

Doran, Artistic Director of the Royal Shakespeare Company, opines thus in the programme for his production:

“This is, without doubt in my mind, the greatest American play of the 20th Century and it takes its rightful place, alongside Shakespeare, on our main stage to mark the centenary of Arthur Miller’s birth.”

Leaving aside the question of what the greatest American play of the 20th Century is, it remains unclear why, whatever that play might be, it should have or take “its rightful place” alongside Shakespeare on the RSC’s main stage. Once you start that game, where do you stop? The best American play of every century? The best English, French or Russian play of any century? Why does anything not written by Shakespeare have a “rightful” place on an RSC stage?

Why the RST? Why not the Swan Theatre, where, frankly, the intimacy of Death of a Salesman would be better served? In an era where Doran has decided, perfectly sensibly, that Shakespeare will not play in the Swan until all of the plays in the canon have appeared in the RST, why stage Death of a Salesman there?

Ivo Van Hove has just recently demonstrated why it could be thought that A View From A Bridge is a better Miller play than Death of a Salesman, and the Old Vic’s recent Crucible provided a similar argument. There are plays by Tennessee Williams, Edward Albee and John Steinbeck which could easily claim the mantle of best American play of the 20th century.

On any view of it, staging Death of a Salesman on the main stage at Stratford was a risky decision. Yet, this production is easily the worst production Doran has directed for the RSC in the last 8 years. Easily. And while Antony Sher’s shortcomings are central to that failure, they are not solely responsible.

Whatever way you look at it, Miller’s play, though steeped in harsh realities, is lyrical, haunting, and impressionistic – it depends upon imagination, dreams, shadows, memories and illusions. Stephen Brimson Lewis’s set, while not so solid as to be kitchen sink realistic, is solid enough to create a sense of permanence rather than transience. It is tricksy, too, with platforms that rise and fall, and, critically, it mostly keeps the action well back on the stage, away from the audience, away from the possibility of intimacy either of thought or experience.

My witty companion noted, correctly, that the set could have been for a production of West Side Story. There were huge translucent flats either side of the rear of the stage suggesting typical New York tenements and in front of those was a sectional view of the Loman house, complete with porch, kitchen, main bedroom, a partial view of the bathroom and an upper level where the room Biff and Happy share can be found. In front of the Loman abode there stretched an expanse of stage, at the very front of which elevating platforms brought an hotel bedroom, a vegetable patch and, finally, a grave.

The lighting by Tim Mitchell reinforced a film noir feel to proceedings; a feeling augmented and emphasised by the very loud, and quite jarring, post-WWII music played live by a gifted troupe of musicians. Together with the use of strong colours in the costumes, the overall expectation created by the visual aspects of the production is akin to an early Technicolor feature film: something exotic, gaudy, compelling. It does not seem like the setting for a tragedy about wasted lives, crushed dreams and the tawdry reality of the American Dream.

Compounding the sense of otherness is the very mannered style of the acting. Most performances are clipped, precise, a series of individual scenes rather than a complex integrated characterisation. Accents are exact, more important, seemingly, than the words themselves, their meaning or resonances. There is a tangible sense of unreality, disconnection, heightened observation.

The result is that the overall impression is that one is experiencing a musical, even a ballet (particularly in the memory sequences where Biff and Happy are kids), but without music. This may be entirely deliberate: creating a visual and aural tapestry, which reeks America, but which does not fulfil its promise, to offset against or enhance the sad plight of Willy Loman. If so, it does not succeed.

It might be true that the set provides a constant reminder of shifting perceptions, the dwarfing of the Loman household by the community around it, and a general feeling of societal oppression. But, equally, the set distracts, taking attention away from the specifics of the aspirations and failings of the Loman family. The manner of presentation here, while undoubtedly impressive, obfuscates rather than illuminates Miller’s narrative.

This is true, too, of Sher’s performance. The role of Willy Loman is very exacting, requiring great range and subtlety from the actor. The single greatest requirement, though, is for the actor to be Loman rather than to play him; there needs to be total immersion in the character, and the character’s different stages. It must be possible to see the Loman who so enthralled and impressed his sons, the Loman who believed in the Dream and to contrast that against the Loman who is engulfed, diminished, destroyed.

Sher gives a prickly, vigorous, erratically explosive performance. It is impressive in some ways, particularly in the clarity about the timelines, but it never reaches the great heights it should, or the great lows. He might wear Loman’s skin but he never gets under it. There is too much “acting”. And, ultimately, Sher’s inability to convey the weary, desperate sense of waste and foolishness that is the way Loman views his own life, undermines the effectiveness of the play as a great tragedy.

Sher is not assisted by Harriet Walter’s tough, taut Linda. Walter is a wonderful actress but her natural strength of spirit and character is difficult to subdue. Linda is the epitome of downtrodden, ignored, disregarded; Walter does not lose herself into the role of domestic doormat. She looks too much like she might smack Loman in the face with an iron and one wonders, often, why she lets him talk to her the way she does.

There is much much more to Biff than Alex Hassell unearths in this production. Yes, he is in excellent physical condition, but there is little sense of the spirit of the troubled son who yearns for the great outdoors as a way of escaping the confines of his father’s false world. Nor do we ever really come to see that it is Biff, alone in the family, who faces up to reality, no matter what the cost. That said, Hassell’s relationship with Sam Marks’ Happy is very convincing and Marks comes closest to the essence of his character than the others in the family quartet do. He is particularly good in puppy-dog mode in the “boys” sequences and shows that his father’s hand is firmly on him in the scene where he and Biff have dinner with their father.

The strength of the central performances can be judged most clearly against the simply beautiful, pitch-perfect turns from Joshua Richards as Charley, Brodie Ross as Bernard and, especially, Sarah Parks as The Woman. Each of these three completely inhabits their characters, making them true, whole and wonderfully resonant. Richards is magnificent in the scene where he tries to save Willy by giving him a job – every word, every inflection utterly perfect. He is also riveting in the final funereal tableau. Ross is wonderfully nerdy and sycophantic as the bright boy who adores Biff and wants to be friends; later, as a grown man, he comes to embody the dreams Willy had for Biff and, by so doing, holds a metaphorical mirror to Willy’s face and questions where he went wrong as father, inspirer and patriarch.

Parks is a triumph of incomprehension and humiliation as Willy’s secret lover whom he discards like garbage when Biff suddenly arrives unannounced; indeed, the enduring memory I have from this production is the dazed look of fear, disbelief and revulsion that Parks gives as she backs away into the darkness, wearing her petticoat and clutching her clothes. She is perfection. (She would have made an ideal Linda too).

Would that the depth of commitment and feeling that Parks, Ross and Richards exhibit here have extended to the entire company and, especially, the leading quartet. Tobias Beer wastes the great scene where Howard removes the rug from underneath Willy’s feet and Guy Paul is lacklustre as Uncle Ben, a character that should be wildly charismatic and provide some indication of where Willy’s dreams have come from.

Typically of Doran, this is a very lucid production, not the least because Tim Mitchell’s lighting goes to exquisite lengths to create a sense of the co-existence of thoughts and memories which defines Willy’s perceptions. The story is told with clarity. But the failure of the leading actors to truly become the characters they are playing, means that ultimately much is lost; the possibilities Miller’s play provides for self-reflection and confronting truths about the pressures of society are not realised. While it looks great, its deceptively uninvolving.

It’s difficult for attention to be paid when you are constantly waiting for the Jets to appear.