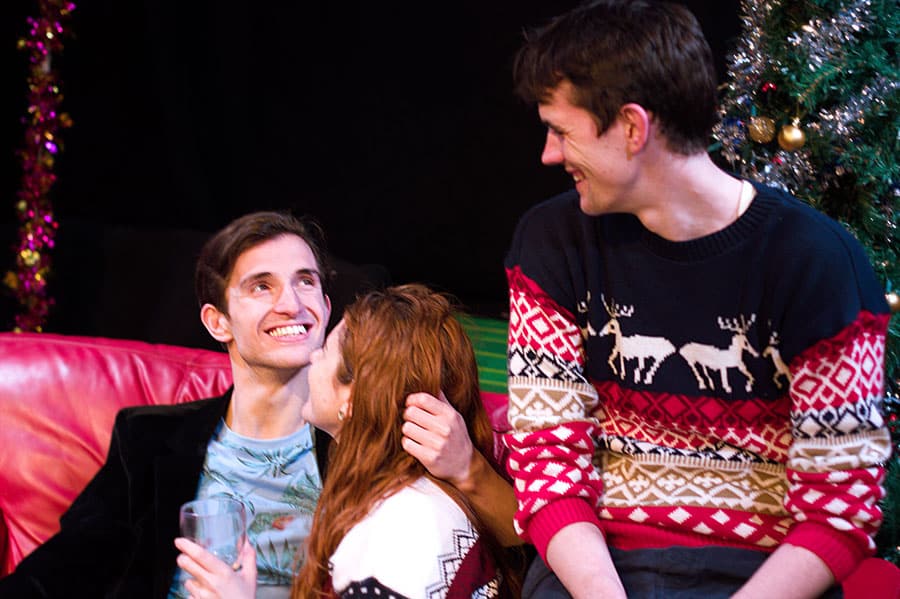 The Crumple Zone
King’s Head Theatre
26th November 2018
4 Stars
Book Now
This show just gets funnier and move likeable with each time I see it, and I’ve seen it so far three times.  You can’t say that about every new comedy that’s written, so all credit to Richard Lambert for single-handedly discovering writer Buddy Thomas: his first production played at the Clapham Omnibus a couple of Christmas seasons ago, and there I saw it twice.  Since then, Thomas, who continues to develop as a writer, has updated the story (from the Eighties to now), and changed some of the characters: one of the guys in it (Nick Brittain in glitteringly preppy form as ‘Alex’) is now bisexual, and the unexpected appearance of his girlfriend (the American grown and trained and experienced Natasha Edwards as ‘Sam’) – discovering Alex in a tangled and definitely compromising position with clean-cut, all-American ‘Buck’ (an attractive Robbie Capaldi) and Lucas Livesey’s show-stealing, wise-cracking bitter-‘n’-twisted but loveable with it queen, ‘Terry’, is now one of the new thrills the script has to offer.  The cast is completed by the straight married man who has sex with men on the side, Faros Xenofos’ totally credible and macho ‘Roger’. 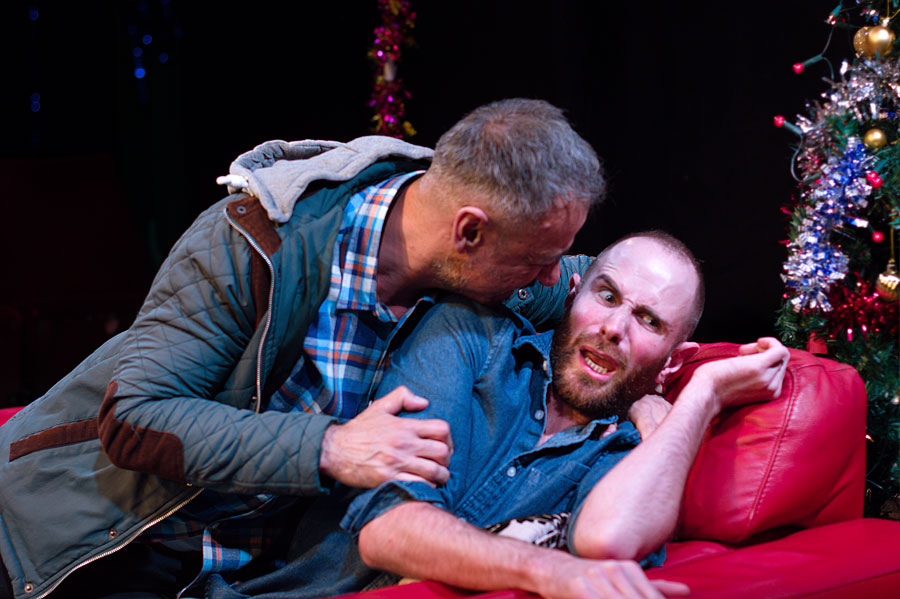 It’s a game set up: criss-crossing relationships smashing into each other, as people are attracted to people who don’t or can’t reciprocate in anything like a neat and tidy way: it’s a play for today, about the messy, chaotic lives we lead.  The joy is that the turbulent emotional landscape is packed, choc-full with the most delicious one-liners, most – but by no means all – of these emanating form the icily curled lip of Terry.  The running time of the show has been cropped by a fair few minutes, and, stripped of its intermission, it now runs just a swift 74 minutes; this helps the sense of farcical pace.  But I still was left at the end – as I was before – being totally smitten with these characters and wanting to spend more time, not less, in their company.  I am carrying a torch for this one, and pray every night that Thomas will somehow get it together to write the continuing adventures of these wonderful people, who are now so much a part of my life. 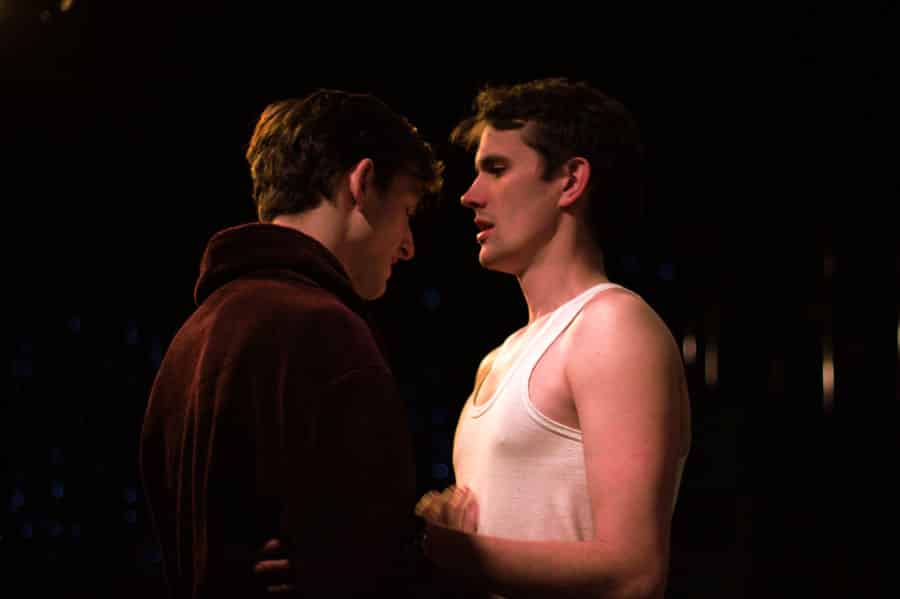 In fact, I can’t imagine Christmas anymore without seeing this show: its archetypal referencing of ‘The Grinch who stole Christmas’ and ‘Meet Me In St Louis’ just makes me want to pigeon-hole this title in the same way.  It’s a fable; it’s huge.  Five people in one room have never had so much to say about inclusion, and family, and belonging, and trust, and home, and love amongst those whom society either does not want to or cannot understand.  The King’s Head have done the right thing in programming it: I only hope it reaches their audiences, because it has so much to say to them.  You come away from it feeling not just entertained, but elated, raised up higher than you were when you came in: validated.  It’s heart-warming and laughter-producing in equal measure.
Lambert also designs and – of course – lights the show: they are camping out for a fortnight on the set of the theatre’s annual Charles Court Opera Panto, but they sit nicely on top of that fresh and verdant design: a sofa, a tree, and a coffee-table are pretty much all this show needs.  But it is Robert McWhir’s gentle direction most of all that let’s the script speak for itself – and what wonderful lines it has for us – allowing his cast the maximum latitude to make the words their own.  Livesey and Edwards carry off the emotional core of the tale, getting the last word – and rightly so.  They are a truly beautiful couple, of a most unusual sort.  But this beautiful story is strong on its central message: You never know where you’re going with your life, and being open to affection and truth and humanity is all you have to go on.  Everything else is a mystery.
If you see anything this Christmas, see this show.  You’ll love yourself for it.