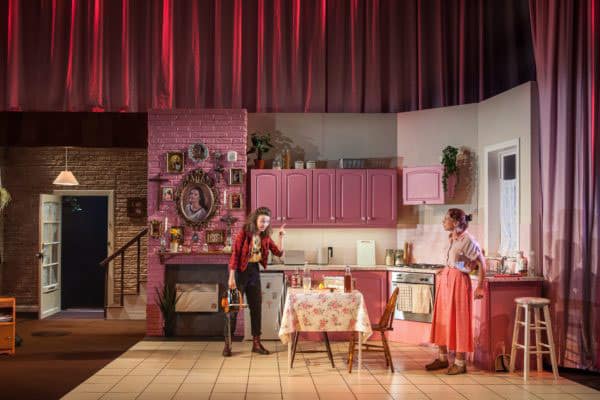 Meghan Tyler’s excellent new play is set in Northern Ireland in 1989. Pious Alannah keeps a tidy home, cleaning the sink with a toothbrush, hiding her sins – smoking and crisps- away neatly. Crashing through the window comes her sister Fianna, absent for years after being imprisoned for setting the fire that killed their mother, potentially on the run from the IRA. She has heard that their abusive father is dead. But he’s not, he is the tyrant upstairs, the crocodile that must be dealt with. As the night wears on and the sisters rebond, alcohol reveals certain truths.

This play is a bloody masterpiece in every sense, the dialogue pinging around the space, laughter dying in your throat, genuine shocks as the play becomes more Gothic. Director Gareth Nicholls knows a thing or two about Irish Gothic after directing last year’s hit Ulster American, and he excels himself here. The cast are exceptional. Sean Kearns a threatening presence as Da, physically superb and malevolent. Lisa Dwyer Hogg excellent as Fianna, full of swagger and threat, but equally vulnerable and broken by her father. But it is Lucianne McEvoy who gives the performance of the Fringe as Alannah, breaking your heart making you roar with laughter then shocking you as her freedom produces manic behaviour.

The music is a joy, see this play alone for Alannah’s mishearing of the lyrics to Toto’s hit Africa! See it for how she makes toast and a gin and tonic! See it for how women have been abused and neglected and how revenge may or may not be the best dish served. Without giving anything away, you won’t be able to predict the audacious ending. Thrilling theatre, fight for a return, but don’t use a chainsaw!