Paul T Davies looks back on the Colchester Fringe and the shows he managed to catch. 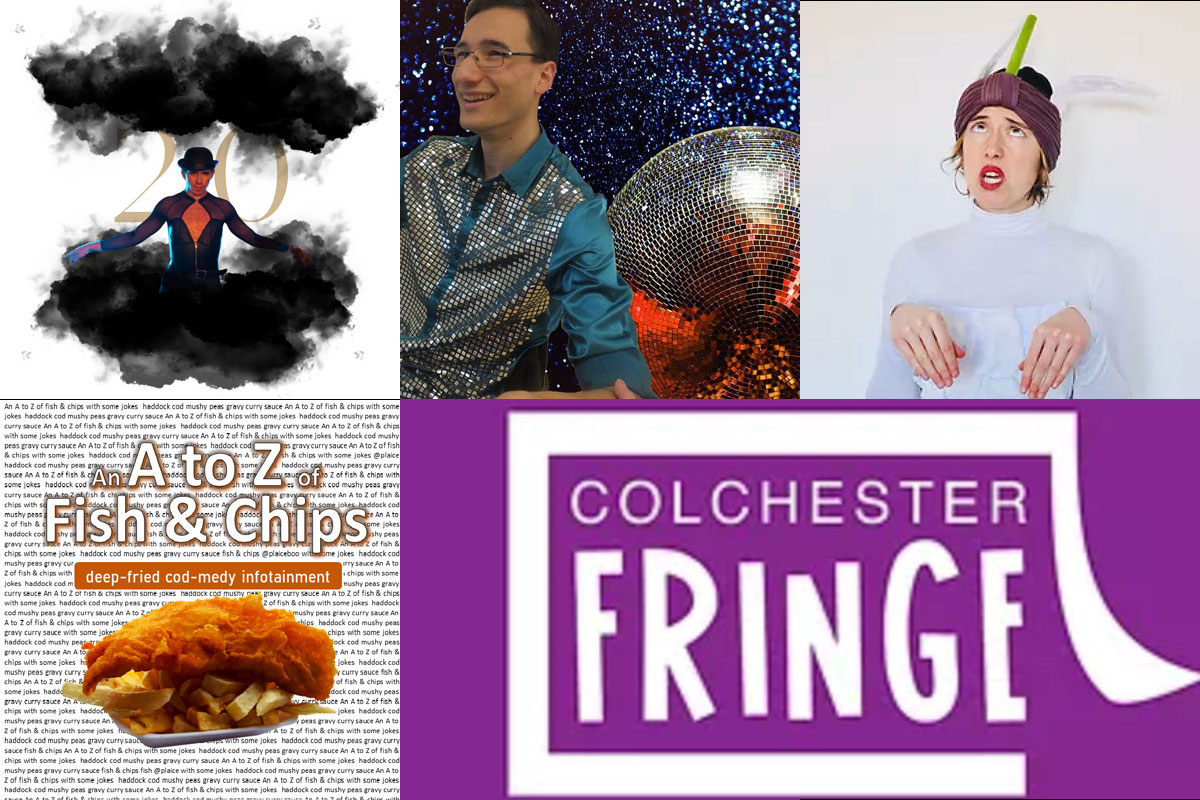 The second Colchester Fringe took over the city last weekend, bigger than the first, and what a wide selection of material was presented! I tried to see what I could in a wide range as possible, from international acts, nationwide and regional, and here are my thoughts!

From Switzerland came the tightest, most controlled and thought-provoking show I’ve seen in a while. It’s basically one woman versus an answering machine, being on hold, having to carry out instructions, and the sheer frustration of hanging on the telephone. All mimed and lip synced, it made me think of DWP applicants being treated brutally as they try to apply for benefits, its multi-language aspect made me think it was a bold satire on the EU and red tape, and when she was naked, I felt she was being measured for a concentration camp. Brilliantly on the right side of frustrating, this was Fringe theatre at its finest.

LIFE IS JUST A BOWL OF CHERRIES. (2 STARS)

From San Diego, Mojalet Theatre brought a dance/theatre experience embracing the connection between opera, soap opera and commercials. It made me realise how similar the plots in both genres are- ludicrous and mythical, and that aspect was very entertaining. However, I felt the piece was created a little in a vacuum, in which the performers understood the themes but not all of it was communicated to the audience, and it lacked emotional depth for me. However, the clowning aspect in the infomercials was superb with an outstanding final image well worth waiting for.

Storytelling is the key to all theatre, and there were two prime examples on this year’s fringe. CAPTAIN JAKE AND THE SEARCH FOR THE RED QUEEN, (4 STARS), was a terrific family show, brilliantly told, and with three excellent young audience members who were happy to go on stage and be part of the pirate gang! I found it great fun, and there was participation for the big kids too! AFTER THAT, (4 STARS), was an intriguing piece set forty years from now, in which everything we love and find pleasurable no longer exists, where being ordinary is better than being happy, and everyone has rocks in their stomachs to keep them “grounded”. It developed into a magical piece about the power and importance of art, and post Covid, we really needed this refreshing and moving reminder, told strongly by Amanda Kelleher.

Comedy was very well represented at the Fringe, and Jimmy Judge’s informative lecture gave us the history of Britain’s traditional favourite. Full of facts, many of which wouldn’t survive being fact checked, clips from his forthcoming musical about the marriage of fish and chips, and some wonderful non-threatening audience participation, Jimmy is a hugely affable entertainer. Less of a Ted Talk and more of a Cod Talk!

BOUNCE AND OUT OF THE DARKNESS (4 STARS)

Local company Radio Vision once more brought their unique style of audio-visual script in hand plays to the Fringe, brilliantly and effectively staged and spoken. The first play, Bounce, focussed on two women on a rooftop, one there to stage a bungee jumping protest, one to end her life. Their chalk-and-cheese personalities, beautifully performed by Sadie Orlando and Josephine Carter, lead them to working together and healing each other. Clare Shaw’s script is packed with themes of environmental damage, the right to protest, mental health, maybe too many themes for such a short play as it felt slightly didactic in places, but the plot was strong and satisfying.

The second piece, Out of The Darkness by Griff Scott, destroyed me. Staged and performed on the actual anniversary of the Aberfan disaster, it spoke directly to my Welsh soul, and was beautiful in its respectful tone, covering the aftermath of the disaster and its terrible toll on the village as well as the horrific events of October 21st 1966. The cast, Orlando being joined by Paul Reed, Ben Maytham and George Deadman, were excellent, and this was a deeply moving experience that would benefit from being performed in its homeland.

LGBTQ+ theatre was there in strength, and I was pleased to catch JUNO AND THE JETPACKS, (3 STARS), gig theatre that shows Juno trying to write her next hit single and album, using her recent break up to give her the spur to express herself.  I felt that the stakes weren’t dramatically high enough in that her split seemed quite amicable and over for some time, and the piece didn’t head towards a strong finale. It’s strength, however, is the superb songs and performance  by Lynsey Woods that made it an outstanding response to people who don’t understand bisexuality and ask the same demeaning questions over and over again, a real shout for solidarity! Hugely entertaining was PAPER DOLLS, (4 STARS), an exploration of drag and what it means to be a drag artist, challenging ideals and images of the “perfect” woman, and the empowerment of a drag persona. Created and performed by Dan Deller-Thompson and Lisa Warnock, and their drag counterparts Tracey Paper and Suga Paper, this was entertaining and thoughtful, with lip-syncing so good I swear the fibres of the wigs trembled the same time as the lips! The “homemade” feel of it was its strength, coming from a very real and personal space, and a gorgeous celebration of self-identity.