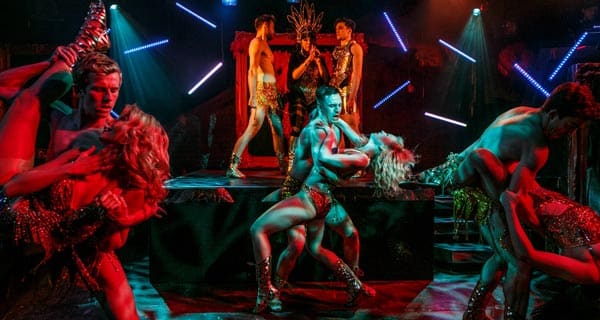 There is a dirty bar to the right, the kind that you remember from your adolescence, that first time you bravely/timidly went with mates/alone to “have a look”/”have a drink”. It looks lush and formerly plush all at once. It makes you ache for alcohol but fear for your sanity. Quintessentially sleazy: alluring and repulsive, endlessly fascinating. The barkeep suits his surroundings; he might be lovely but he has Dirty Old Man oozing from every pore. But then he smiles and it seems a safe smile. This is a safe place.

As you move through the room, past the bar, you see the podium and the long mirror which is pertly placed in the iron support. A sense of raunchy activity seems to throb from that podium, even when it is empty. There is a sister podium and mirror pole across the room. A small stage abuts a dance floor and the ghost of a thousand drag queens seem to be hovering on that space, flickering in between the fluro lights, the decor all black and red, tawdry and seductive. You notice the cheerful DJ – or is it a band – atop the bar. You feel like you could be in any nightclub you have ever been in anywhere in the land. Possibly any land.

As you ask yourself why there isn’t a decent cocktail in your hand, it starts. It’s not until the half-naked bearded man, in the cut-off Tshirt and the skin tight leather pants starts thrusting and gyrating and all but having sex with the mirror pole, that you are sure you are in a gay nightclub. Those first, vibrant images burn into your soul – and as Billie Tricks sings up a hurricane (storm just isn’t enough) with the opening number, My Night, every audience member makes a choice: go along for the ride or resent every second. There is no middle ground here.

This is Closer To Heaven, the 2001 Pet Shop Boys/Jonathan Harvey musical now being revived by the resourceful Union Theatre. Directed skilfully by Gene David Kirk, with inspired musical direction from Patrick Stockbridge and choreography from Philip Joel that is vital and infectious, this revival makes one wonder why this show has not been revived before. I doubt I have seen a better set design at the Union. The combination of David Shields’ perfect and quite ingenious design and the superbly evocative, whether it be bold, brash or beautiful, lighting from Tim Deiling ensures that the Union Theatre space is perfect – scintillatingly perfect – for the requirements of the work.

There is a rawness, a ragged realism to every aspect of the physical production which is impressive. In some scenes, if you close your eyes you can smell the stale odour of piss and vomit and sweat – the natural accoutrements of a big night out at the club. The sound produced by Stockbridge and Alessandro Lombardo (Drums) is perfect, for the score, for the sense of the setting, for the spirit of the mood. From a technical point of view, given the budgetary and space limitations, this is really as good a production as could be mounted of Closer To Heaven.

In terms of form, the musical is almost textbook. There is a main story and some subplots. The score has a cohesiveness which is flawless; many, if not all, of the songs move on the action, enhance understanding of character, provide insight, and yet there is rich variety too – ballads of great beauty, arch torch songs, fun songs full of life and sombre reflective numbers. Plus some sizzling dance tunes that bring out your inner pop star, no matter how reluctant or hidden away that star may be.

Harvey’s script and dialogue is trite, often, and the situations predictable and well worn. But, actually, that doesn’t matter. It’s the fusion of the music and the possibilities which works the theatrical magic here. Harvey provides the undercoat; the score and choreography provide the texture, the patterns, the colour, the overall effect.

What makes the musical stand-out is it unashamed gaiety, in its modern sense. This is, as Nicholas De Jongh said when the piece premiered, “the first truly gay musical to be written and composed by Englishmen” to reach the West End. It is also essentially youthful, and quite uncompromising in dealing head on with the vagaries and traps of young adulthood: sex, drugs (use and sale), pop music, alcohol, predatory conduct, prostitution, love, survival, sexuality and, most compellingly, the family you create separate from the family into which you are born. It doesn’t feel dated either and certainly the reaction of the younger members of the audience around me did not suggest they thought it so.

Making his professional debut, Jared Thompson is effortlessly naive as Straight Dave, the Irish lad who moves to London looking for work and who wants to dance. Lonely and uncertain, but quite cocky about his dancing skills, he auditions for Vic, who runs the club. Whether it is his looks or his moves, both of which are very impressive, Dave gets given the gig by Vic.

Vic may have been distracted because his daughter, Shell, whom he has not seen for years, has tracked him down and made him face up to his past and her present. As they start upon the road to healing their father/daughter link, Dave and Shell get together. Which is surprising given the uncertainty Shell has about Dave’s sexuality and the way Dave reacts to his first sighting of Mile End Lee, the very fit, small time drug dealer who frequents the club and is the occasional lover of Billie Tricks, the could-be-a-drag-queen-but-isn’t-been-there-done-everything-and-everyone mistress of ceremonies at Vic’s club.

Eventually, Vic catches Dave and Lee having “fooling around” sex in the club toilet and Shell is understandably horrified. After some angst and prevarication, eventually Dave and Lee make love, each experiencing the emotion properly for the first time. As this is a musical, the lofty heights of glorious passion are followed by the despair occasioned by untimely and undeserved death and, rather like Maria in West Side Story, Dave is left to face life without his lover. Unlike Maria, Dave gets a positive coda.

The narrative is as in your face as might be imagined and the excess and sheer delight of the fiery Billie Tricks character is as confrontational as it is entertaining. Joel’s spirited, sexy choreography, delivered with full body enthusiasm by the talented cast, adds smoke. Indeed, so ingrained is the sense of dance in the piece, that it seemed silly that there were not always populated podiums – having scantily clad dancers, girls and boys, constantly working the mirror poles would have provided both an electric framing device for the action and a constant throb of passionate pleasure to underline the dramatic events. The dancing could propel the tale as well as the score does.

If there is a quibble with this production, it is that it is too safe. It is not as sleazy or as camp (very different things) as it might be, probably should be. In a couple of scenes, time having moved on since 2001, nudity, with or without the modesty bed linen, is really essential for the truth of the moment to shine through.

Thompson sings and dances extremely well as Straight Dave. He has a fresh innocence which works perfectly for the part, although the steel of ambition clangs from his eyes when it is necessary. He is convincing in the love scenes with both Shell and Lee, and his final songs, For All Of Us, a reprise of the title song and Positive Role Model are expertly delivered, full of longing, loss and assuredness. He is a little too effete for it to be a surprise that he fancies Lee, but this does not wholly undermine what is an essentially truthful and complex performance.

Connor Brabyn is compelling as the doomed Mile End Lee. Ostensibly the tough, uncaring drug dealer, Brabyn finds the complexity and torment in the role and subtlely, but surely, emphasises those parts. His awkwardness when Dave praises his beauty is perfectly judged, as is his disdain when having sex with Billie. He and Thompson excel in finding the wonder and the harmony in their climactic Closer To Heaven duet. Equally, Brabyn convinces as the wanna-be hard man, his lithe and wiry frame coiled for action in that “Try me” fashion which causes people to back slowly away.

As Flynn, Ben Kavanagh is a poisonous delight. He swishes and flounces and dishes as though he were the love child of Louie Spence and Boy George. It’s a terrifically judged performance, the trace of pain never far from the heavy mascara. Ken Christiansen, as his brutal, unkind employer, Bob, is more angry and shouty than he need be – oily, corrupt, hideousness would make for a richer, more disturbing portrayal of abuse. Together, though, they make an unhappy couple, precisely as they should.

Katie Meller gets the plumb role and revels in it. For all that this is a musical about gay love and adolescent angst, it is the ageing, raging show queen songstress who gets the laughs and the big numbers – My Night, It’s Just My Little Tribute to Caligula, Darling! and Friendly Fire are all showstoppers – and Meller gives each full, raspy throated, innuendo laden, hedonistic supremo attention. Her sexuality as fluid as her tongue is vicious, Meller impressively carves her Billie out of theatrical marble; there is a raw beauty to her rough edges, her vulgar angles, her dissolute exuberance. More than anything, Meller makes Billie seem like Elsie, with whom Sally Bowles shared two sordid rooms in Chelsea. Meller brings the cabaret to the table.

Neither Craig Berry as Vic nor Amy Matthews as Shell seemed completely at ease with their challenging roles. Matthews has a sweet voice but needs to support it more; Berry is not up to the demands of Vampires, which is a loss as it is a great anthem. In their scenes together, both do their best work. They make the idea of the fragmented family scrabbling to reconnect work well.

The ensemble are largely excellent, with particularly impressive work from Grace Reynolds, Alex Tranter, Martin Harding and Tamsyn Blake. It appears that they are all having a good time and everyone embraces the odd and unfamiliar, or seemingly so, things their characters indulge in doing. Occasionally, there is some focus-pulling and scenery chewing which is unnecessary and jarring, but when they are all working together, dancing Joel’s slick routines and singing their all, they are very impressive indeed. Hedonism, which closes Act One and opens Act Two is the kind of number which makes anyone want to dance.

The season is sold out, although there may be daily returns. It is worth trying to catch this production if you can. If there is any justice, though, it will transfer to a space where it can run and run. Because it demonstrates the value and power of the work done by the Pet Shop Boys and Harvey, this production takes everyone who sees it that little bit closer to heaven.