Julian Eaves reviews Closer to Heaven, a musical by Jonathan Harvery and The Pet Shop Boys now playing at Above The Stag. 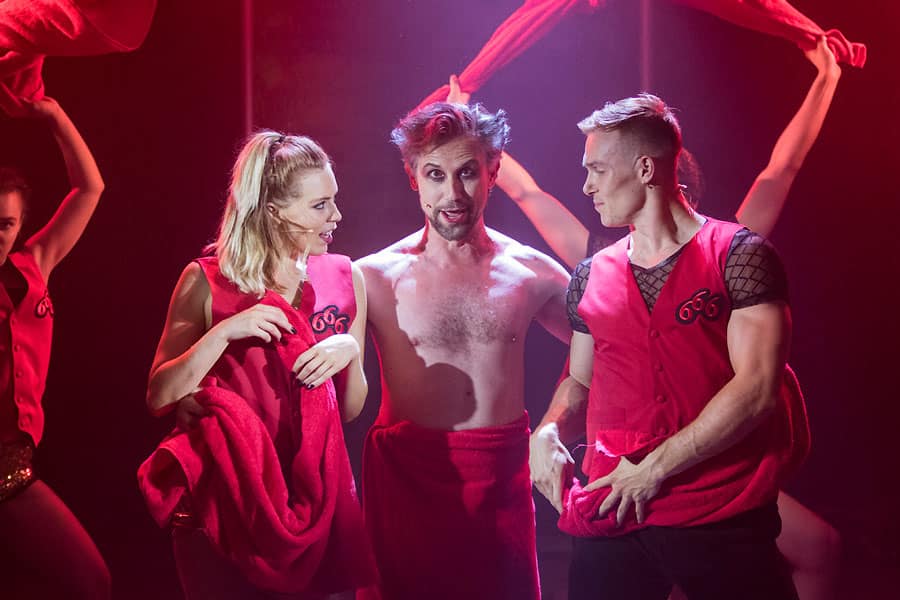 Working its way through the complete available oeuvre of Jonathan Harvey’s stage works, this producing theatre now gets to a revival of his nearly 20-yeas old musical collaboration with The Pet Shop Boys about a dysfunctional father-daughter reunion in the capital’s glamorous but seedy clubland.  In a stunning staging – simple and yet panoramic – by David Shields and lit (the lighting is ALL important here) by the genius Jack Weir, Steven Dexter’s supple production, fused at the hip with Ashley Luke Lloyd’s idiomatic and characterful choreography, we witness a medley of demi-mondains flit this way and that as their stories criss-cross in scenes of near perpetual darkness, flashed through with garishly wonderful neon and Ben Walden’s choicest video animations.   It’s a feast for the eyes, and with the PSBs’  interestingly eclectic score thumping or strumming away through its cinematic scenes, usually a joy to the ears.  While their attempts at writing recitative are often halting, the stand-alone numbers are excellent.  For example, I hadn’t heard ‘For All Of Us’ since I saw the original production at The Arts Theatre, and two decades later it still comes up fresh as a daisy. 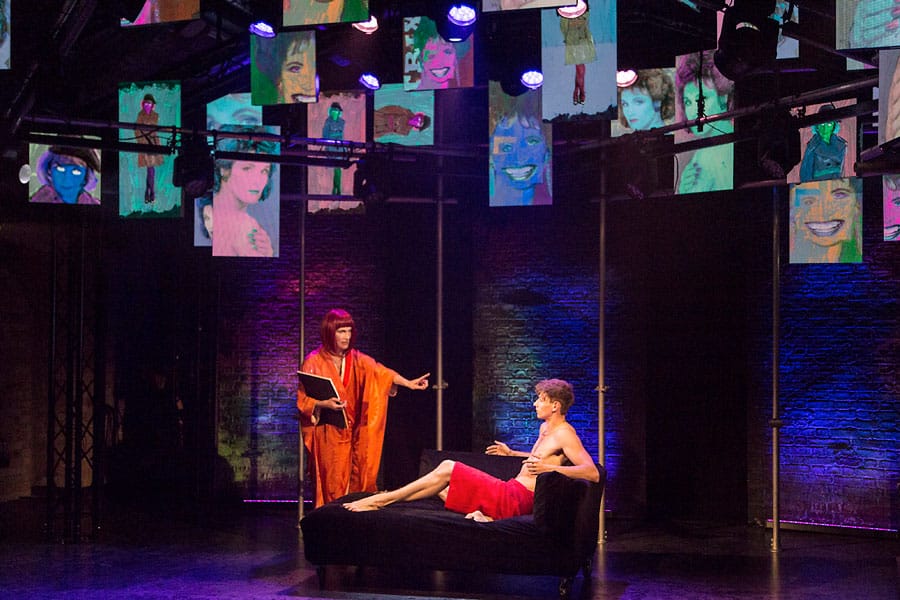 Less sure-footed is Harvey’s book, which takes a while to find its feet through the meandering scenes of the almost interminably expositional first half: things improve at the climax of the act, as back-sliding dad hurls himself once more onto the road to druggie damnation – taking him nearer to hell than anywhere else.  This eschatological dialogue, however, is – on the whole – not what the show seems to be about.  If you take a moment – or ten – to read through the lengthy article republished in the programme, in which the ‘boys’ discuss their approach to the piece, and how they worked with, or around, Harvey, what emerges is an intention to make it a kind of exploration of a mood, or ambience.  Rather like a pop album, perhaps.  Just put on the stage.  Given that their live shows for the past decade had been from the outset strongly influenced by film, stage and architectural design, this makes some kind of sense.  When approaching this show from a critical viewpoint, it’s probably best to bear this in mind. 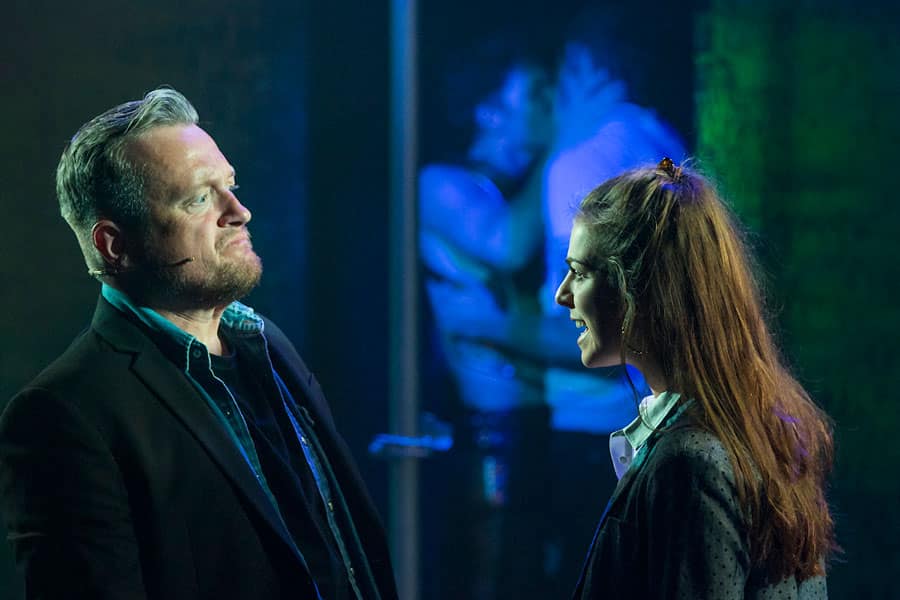 Central to this is the figurehead personality of Billie Trix, here given unusually striking and sombre form by Fascinating Aida’s Adele Anderson.  She’s a kind of mix of the Marcshallin from ‘Der Rosenkavalier’ and the MC from Neil Tennant and Chris Lowe’s own most revered musical play, ‘Cabaret’; much given to bossing people around, and commenting on love and its manifold joys and torments, she keeps her hand in with as many different lovers and intrigues as possible.  Like the rest of the script, Trix is on strongest form in the second half: her ‘Friendly Fire’ is a beautifully intelligent commentary on the generation and attitude she represents and Anderson knows exactly how to put it across to best effect. Interestingly, as her role becomes darker in tone, she finds increasing quantities of humour in it to lighten the shadows she takes us into. 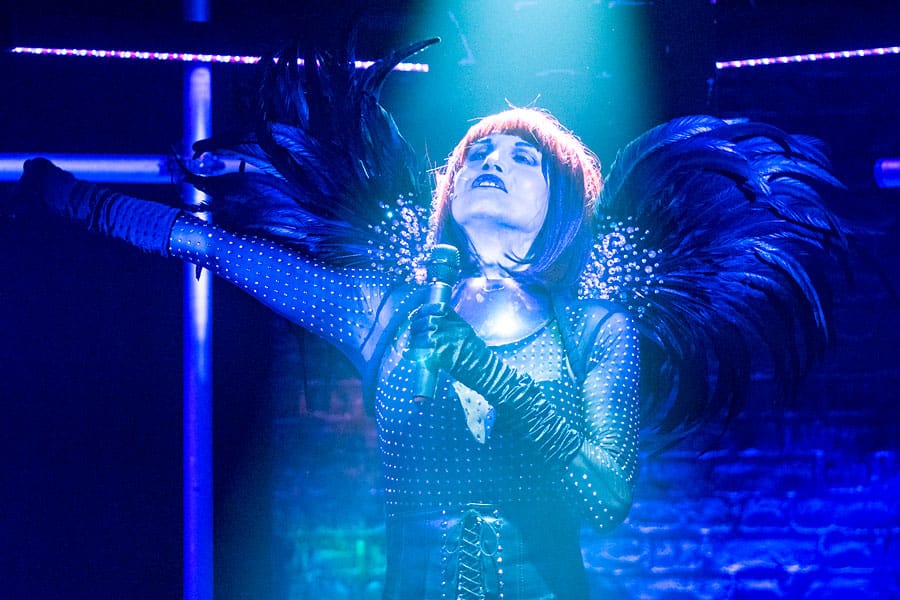 Just as admirable is the other element central to our progress through this morass of immorality and insecurity: ‘Straight’ Dave, created here for us by endearing newcomer Blake Patrick Anderson (no relation, as far as I’m aware), has just arrived in the big city from the considerably less enlightened and decadent Republic of Ireland, and a great deal of the show is glimpsed through his inexperienced and trusting eyes.  BPA makes good work of this, and his journey through the whole show is the nearest thing we get to a fully realised ‘book’ development.

A close runner-up is his sometime inamorata, Maddy Banks’ forthright and strong-willed Shell Christian.  She has to fight her way through a series of more-or-less unsatisfactory relationships with men, including her father – Christopher Howell’s Vic Christian – and the go-go dancer and would-be pop singer, Dave.  But these relationships are cast on the rocks of substance abuse on the one hand, and the complications of bisexuality on both.  For not only does Dave have to fend off an approach by his girlfriend’s dad (I hope you’re following all this), but he falls in with his local resident drug-dealer, Mile End Lee, the always watchable recent MTA graduate, Mikulas Urbanek, who – in turn – has his own demons with which to wrestle. 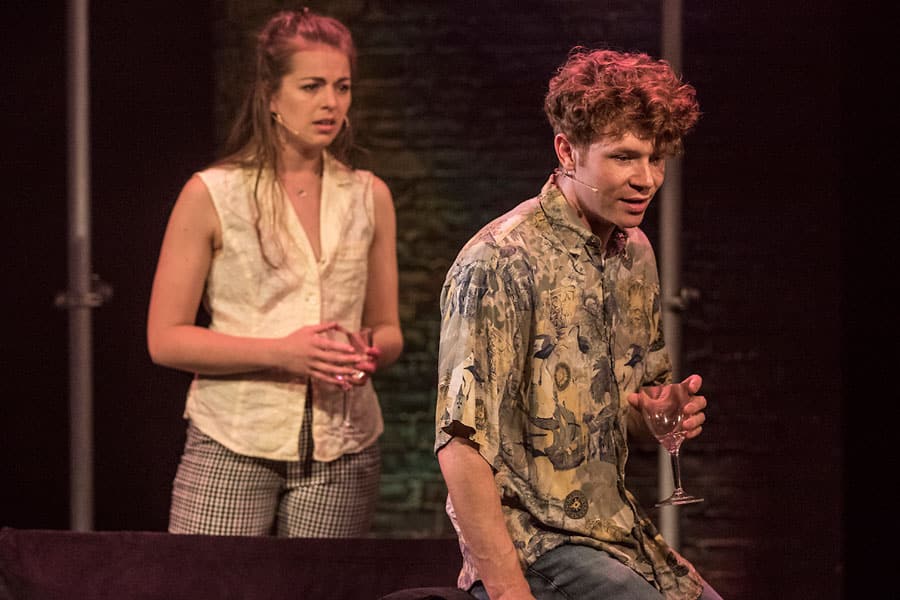 And trouble does not end there.  A further complication to this already crowded mis-en-scene is the predatory record producer and all-round sleazoid, Bob Saunders, who says he is going to make Dave a pop star: it’s another juicy characterisation from the debonair and witty Ian Hallard, who appears not to notice the heavy burden of narrative detail that he has to introduce into the mix, comparatively late in the day.  He for his part – oh, yes – has his own contextual tensions, expertly generated by the useful Aidan Harkins as his bum-wiping crony, Flynn.  The pretty picture is completed by a quartet of dancers and hangers-on: the super athletic Rhys Harding and more lightly sculpted Matthew Ives, and the busy girls, Billie Hardy and Hollie Smith-Nelson. 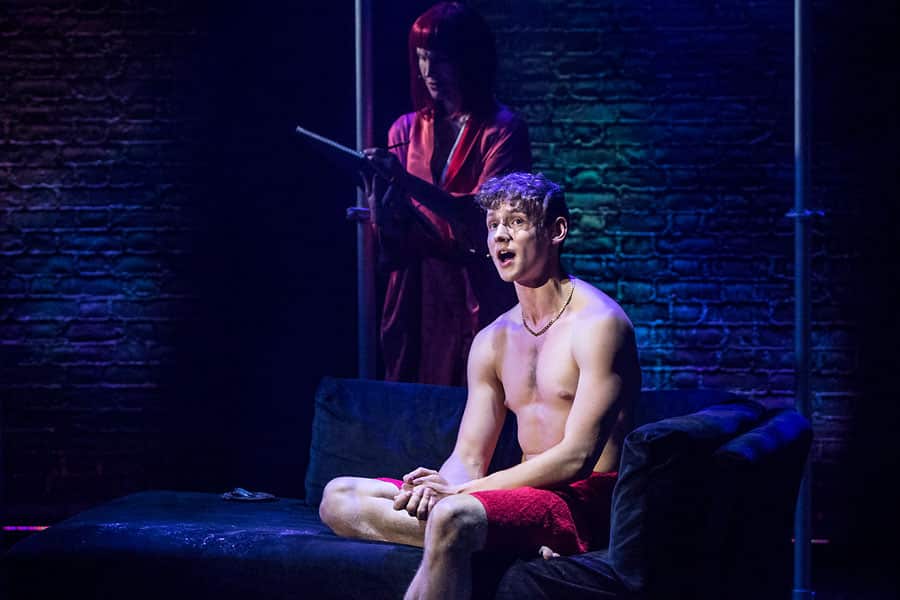 I cannot pretend that this plot was particularly transparent to me the first time I saw the show, but it resonated well enough for me to look forward to seeing it again.  On second inspection, the complicated inter-relationships are so much more comprehensible.  But, of course, in today’s world, one cannot expect audiences to come back twice to see a show, just in order to disentangle the twists and turns of its crowded narrative.  When – finally! – all these elements have been laboriously assembled and explained on stage, then Harvey settles down to explore their more meaningful and engaging interactions.  But since its original launch, and in spite of a couple of significant revivals in between, this show remains a tricky one, with all the basic problems still in place.

That should not deter fans of the composer-lyricists, who turn out a good number of superb songs, all here given honest-to-goodness performances by a talented and committed cast.  The first half may wander a tad, but the pay-offs in the second part are well worth the persevering with.  Enjoy!

BOOK TICKETS TO CLOSER TO HEAVEN