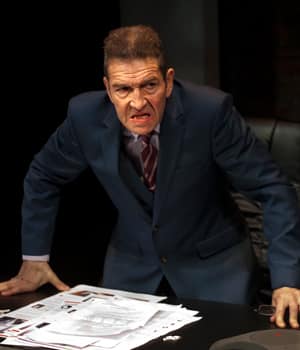 When you’re travelling thematically through the well-trodden fields of script writing greats, like America’s Paddy Chayevsky, whose prescient script for the film “Network” is said to have accidentally inspired the presenting style of today’s right-wing TV blowhards, you’d better carry a big stick with immense dexterity to give the horrible world of British “journalism” (the Mail/Star/Express) the bollocking it so rightly deserves.

Mark Jagasia not only fails to carry that stick, but it’s too heavy for him to pick up in the first place. “Clarion,” now playing at the Arcola, is the broadest bit of anti-newspaper criticism that’s been on the stage in years, and that includes the National’s crack at phone hacking, Great Britain.

It is quite fitting that the print media has given this piece such a high rating. It’s a great thing to pat yourself on the back—Jagasia is one of their own and this is his first foray into playwriting. But ultimately, he fails in two important respects. Firstly, Clarion suffers from an extreme lack in story structure and character development. He fills this void with the second major issue: meta-jokes at non-whites and the LGBT community, and not-quite-meta utter contempt for anyone under the age of 30.

To attack the first problem: Yes, there is a story, per se, a paper on the brink of editorial (but not financial) collapse is about to fire its senior alcoholic journalist who wants to “make things right” because, though she may have sold out, she still has standards. However, the vitally important virtuous cycle that drives good script writing– reaction to plot revealing character forcing plot movement (which then reveals further character)– seems to have eluded this first time playwright. We know everything, other than the final plot twist as soon as “the letter” is revealed—which is scene two.

If your plot is going to be obvious from the start, it’s the characters and their journey through the plot that must make the show worth watching. This doesn’t happen here. The characters themselves are telegraphs of what “real journalists” are like—just enough truth mixed in the satire to make them seem “authentic.” And my use of the word telegraph in a critique about a play about newspaper journalists is about as deep as the meta world of “Clarion” itself. 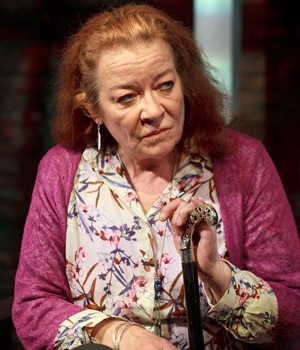 But we’ve seen the alcoholic female journalist written to a much higher standard– extraordinarily by Diane English, and played by Candace Bergen in her 5 time Emmy Award winning performance in the title role of “Murphy Brown.” Murphy was given reason for her alcoholism, and really dealt with it in a way that seemed plausible. Verity, a ridiculously heavy handed name (“ooh look I’ve found a name that means “truth” in Latin and given it to a tabloid journalist”), is written with comparatively extremely broad strokes.

Verity’s alcoholism is explained but only by the two young characters talking about her backstory—this is amateur script writing at its worst. We don’t need to be told why we should forgive a character her faults, we just should see it by her actions. We then hear later on that the backstory we’ve previously heard was actually nonsense, and really, a smoke screen for more alcoholic behaviour. This is more of the same problem—we hear everything, we see nothing. This is a pity, considering Claire Higgins, whose brilliant performance in Vincent in Brixton was the stuff of legend, does a great job with what she’s given. Unfortunately, she’s just not given very much here.

The young “work experience” character is offensive on a number of levels. Not only in that she’s a stereotype, and that she drips with the authors contempt for anyone young, but in that she’s simply boring. We’ve all heard the jokes about Media Studies students being idiots, and the disdain the Old Guard has for them. But the 2011 YouTube viral sensation “Being a Dickhead’s Cool” does a much better job at beating them up AND has a beat you can ironically dance to. It is shocking that such an obvious character is allowed onto the stage at all. I can’t fault the actress for her performance, it’s telegraphed to the cheap seats at the back, but so is the character on the page. The mix of “yah yah” and “am I bovvered” is, for lack of a better word, cheap. Yet again, she does the best she can with what she’s given.

This character leads me to the most troubling problem of the evening. The audience at the rather left wing Arcola Theatre already knows that the right wing press is mostly fictionalised bullying of immigrants and supposed benefits scroungers. So showing us a loud mouthed Editor, Morris, played as one note as it is written by Greg Hicks, just shouting left right and centre about foreigners, gays, and poor people is certainly not a revelation about the horrors of tabloid journalism. It’s expected. There’s a moment where he seems to actually believe his nonsense, which, weirdly enough, is the most honest point in the entire play.

But when a playwright makes horribly racist, sexist, ageist, and homophobic jokes, “knowingly,” and the audience actually laughs at them, “knowingly” (the first time the audience erupted in universal laughter was at Hicks’ vitriolic use of the word “homosexuals”), one wonders where the line between “knowing” humour, and actual hate speech lies. This play certainly doesn’t seem to know, because it actually rewards the Clarion for its misdeeds—sure, one of their own dies because of them, but do we see any genuine human reaction to this moment? No. The audience laughs along with the lying schmucks… “knowingly.” 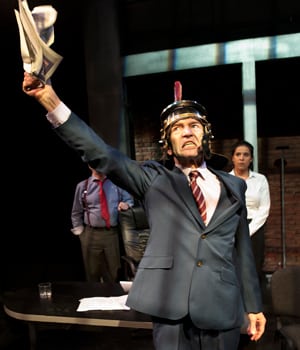 The writing’s overly broad nature is equaled by the production’s choices. There are several young “journalists” in every scene in the newsroom who do not speak, but react, and then move the scenery around. But poker faces and sharply moving heads like the back-up “guitarists” from Robert Palmer’s Addicted to Love music video when performing scene changes add nothing to the production. Quite honestly, considering the Arcola gave reviewers the play text, I seriously thought of heading home and reading Act 2 on the tube, because it didn’t seem like the production would add anything new to make the production pop, considering it did nothing in Act 1. I stayed, and my thoughts were confirmed.

Mark Jagasia may be writing from his own experience as a journalist, but If you’re going to write a play that seemingly wants to decry modern British journalism, make sure it actually does by more than just rehashing what we already assume. “Network,” the iconic Oscar winning film worked because not only did it show what we expected to happen behind the closed doors of a failing TV Network, it took them to a crazed extreme, calmly. That movie predicted the news landscape of today, nearly 40 years early. We don’t need “Clarion” to tell us what we think we “know” about the news of today—because we already have the Daily Mail available at the click of a mouse. Tell us what’s next, because we won’t believe it, until it’s too late. That, tale, unlike Clarion, would live on beyond its initial nearly forgetful production.

Clarion runs at the Arcola Theatre until 14 November 2015