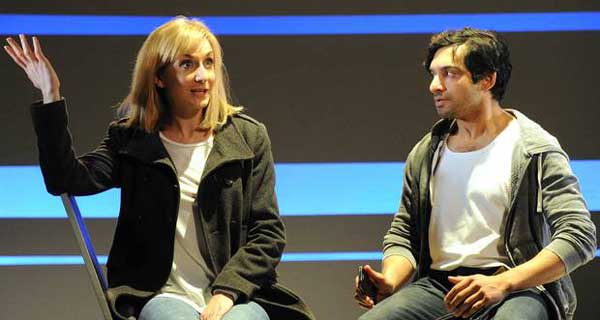 Presenting new writing for the theatre is an inherently challenging process and that the possibility of failure is ever present. Many different pressures can affect the success or failure of new writing: the choice of director, designer, cast; the timing of the production; the budget; the history of the writer or director; the pulling power of a particular actor; the list is extensive. But, inevitably, the most decisive factor is always one thing: the ability of the programmer of the work to see and understand the theatrical possibilities of the piece and to be able to support the work in whatever way it needs in order for the production to be as successful as it might be.

The current artistic director of The Bush Theatre, Madani Younis, has had a string of recent triumphs – Jumpers a For Goalposts, The Herd, Disgraced – and has made the Theatre a more vibrant and compelling destination than it had been under Josie Rourke. But with Dawn King’s Ciphers, a joint production with Exeter Northcott Theatre directed by Blanche McIntyre, Younis has fallen for the oldest trap in the game: choosing to stage a new work from a writer/director team who have runs on the board.

McIntyre and King had an enormous success with Foxfinder in 2011 at the Finborough. Ciphers is not a case of lightning striking twice.

It is a convoluted tale of spies, sex and betrayal, with a murder mystery at its core but with no depth, no insight, no glittering dialogue or lyrical writing and not a single character for whom it is possible to feel empathy. Episodic and non-linear, it is difficult to follow, listless and about as thrilling as watching a paper boat travel over a waterfall.

The acting is uniformly tedious with only Gráinne Keenan achieving any kind of suitable level and then only occasionally. There are eight characters but only four actors. Keenan plays two sisters and in the hands of a great actress this alone could have been the value of the play: a chance to see an actress display dazzling skill while playing two parts essential to the drama. Keenan is best as the secret agent who is murdered; as the other sister she is not convincing.

Still, she is streets better than Shereen Martin and Ronny Jhutti who are both intensely annoying, in every way. Martin is the cold, calculating supervisor of the secret agent and also the domineering, jealous rich wife of the artist with whom the secret agent has an affair. If there are differences in her performance of these two quite different women, they are barely perceptible. Jhutti is best as the artist, but quite laughable as the confused Muslim targeted by the secret services.

Bruce Alexander, as the Russian agent, is consistent only in his inconsistency; more caricature than character. He fares better as the sisters’ father but the sheer pointlessness of the scene in which the father appears overwhelms.

The set, designed by James Perkins, was intensely irritating – moving screens which moved in just one way – and did nothing to add to tension or even scene setting.

There is one moment in the second Act when the entire audience was shocked by the reveal of a prop. That one moment did not seem enough reward for patiently enduring this oddly constructed non-thrilling thriller.