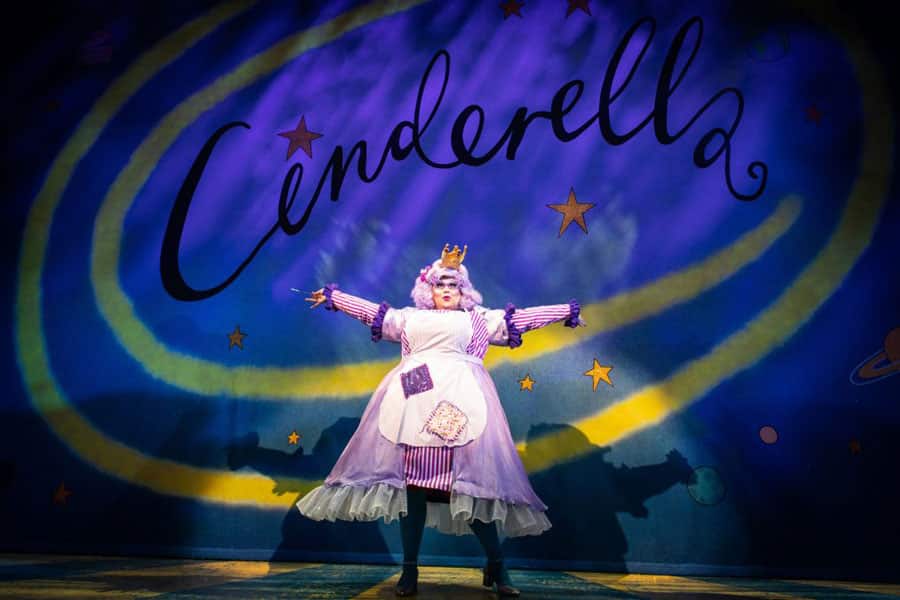 Pantomime season can become repetitive and that very worst of theatrical misadventures enforced fun for all the family; whether you like it or not. It’s the time of year where it becomes excusable should, at intermission, you find yourself forgetting which theatre you are in and which show you’re watching. So, how blissfully refreshing it is to return to the Lyric Hammersmith for its annual, joyously alternate pantomime, where you always know exactly where you are and to expect the unexpected. 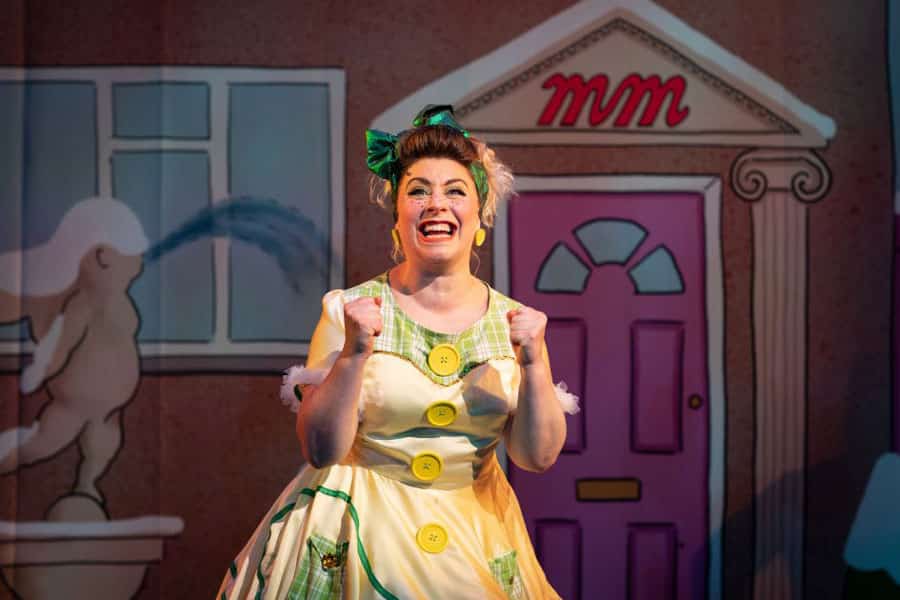 The combination of Lyric regular Jude Christian’s script, Corin Buckeridge’s orchestrations and Jodie Jacobs’ comic timing (not to mention powerhouse vocals) make one feel festive, familial, and completely enchanted in this decidedly urban and passionately proud retelling of the Cinderella story.
Cinderella, her wicked step-family, her magical Fairy Godmother, her Prince, some rodents and the pumpkin are all in residence, but Timmika Ramsey’s dungaree wearing Cinders is not coyly waiting for a Prince to rescue her from domestic drudgery; rather looking to the stars herself as a budding cosmological adventurer. This Cinderella is very much her own person, who Gabriel Fleary’s endearingly plummy Prince falls for not just because of her magical makeover but for her mind, spirit and personality. If this speaks to one little girl in the audience, then the Lyric has done its job! 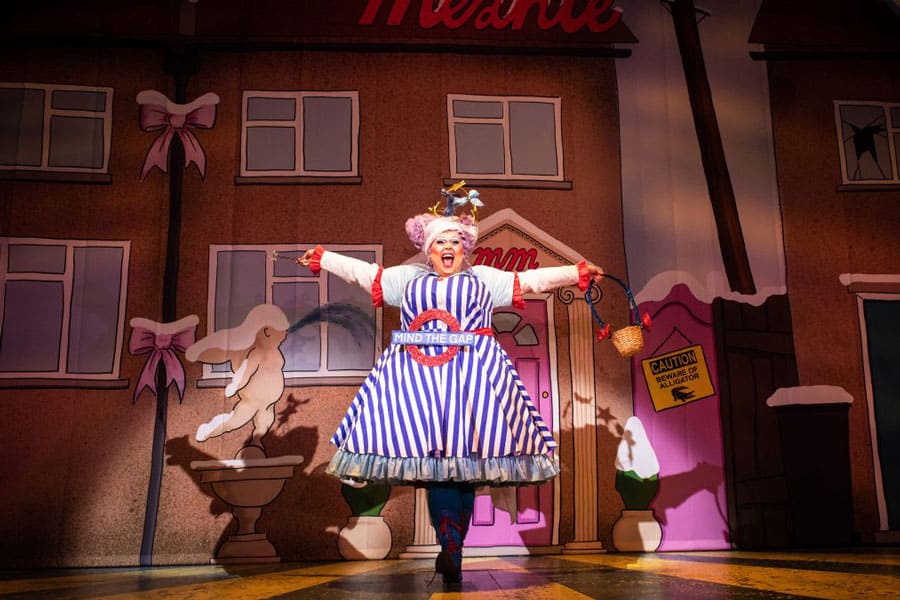 The titular character’s form altering characterisation isn’t the only piece of 2019 that finds its way into this pantomime.  There is a subtle and unexpected 2019 plot diversion that sees the always brilliant Jacobs’ Buttons and Lauren Samuels’ Popsy (fifty per cent of the step-sister duo) joining Cinderella and her Prince in finding their own happily ever after; in what is most definitely the most inclusive and relevant LGBTQ+ sub-plot one might hope to encounter this festive season. It’s a beautiful element of romantic surprise (featuring a pretty spectacular cover of Barbra Streisand’s “Tell Him”, or in this case “Tell Her”). The most beautiful moment came when an audience of all ages cheered two weddings toward the finale, a sign that whilst we still have a long way to go, the future generation should give us all a little bit of pride! 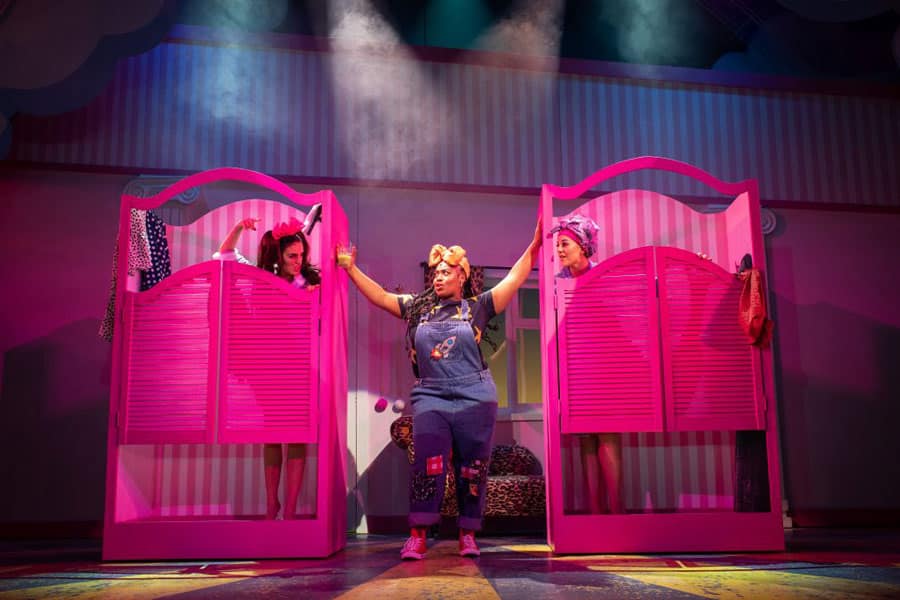 Mairi Barclay’s Topsy, the more villainous stepsister (well, there had to be at least one), assuredly steals so many scenes she may find a well-earned summons for grand larceny in this year’s Christmas stocking. Coupled with Samuels, we have a very different pair of wicked Stepsisters who owe less to the theatre of the grotesque of yesterday and more to the reality tv stars of Chelsea, Cheshire and (of course) Essex (albeit in Barclay’s case with thick Scottish accent which she uses to great aplomb). Their inclusion, coupled with Shobna Gulati’s Madame Meany (complete with pet crocodile) and Rhys Taylor’s panto-perfect Fairy Fredbare ensure that there is enough familiarity to the form in characters with whom we can boo, hiss, or cheer along. 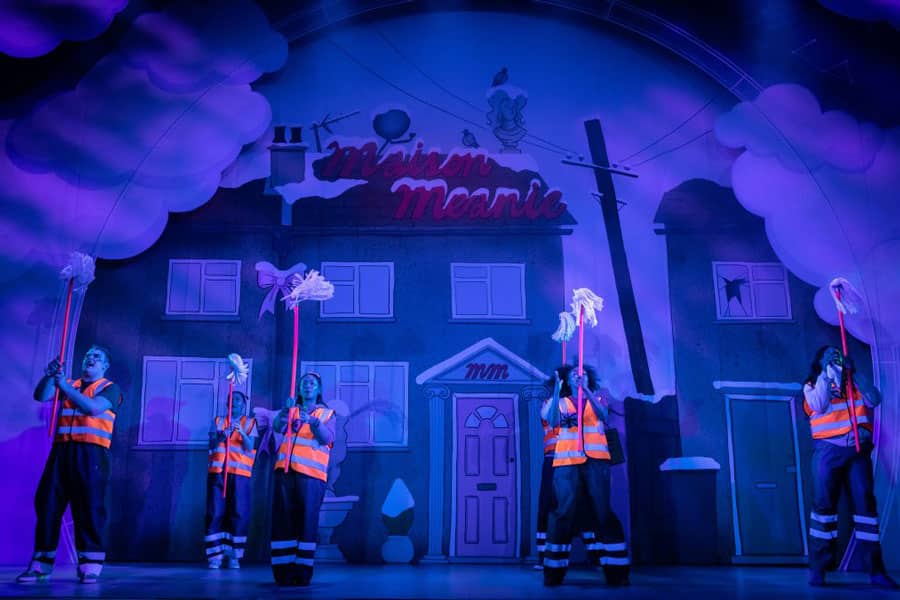 The term alternate pantomime usually conjures a vision of a decidedly adult, single entendre affair; or theatre is family-friendly but a world away from the “oh no it isn’t” history of the form. What the Lyric do so well is adopt the Variety traditions of pantomime yet make them feel an innate part of a clear narrative; from a slime-filled comedy of errors routine featuring Barclay and Samuels to Taylor’s impressive introductory pun-run of London tube stations that received delighted groans and big cheers in equal measure. There were just enough jokes about the Prince’s Balls to keep the more adult members of the audience giggling and some pretty assured vocals throughout. When an audience gleefully sings along to “Shut Up And Dance” but moreover means it, the Lyric can be reassured that it’s pulled another Christmas cracker. (**** 4 STARS)
Barnaby’s View (Aged Nine and Three Quarters)
I loved Cinderella because it was funny, exciting and had a rocket instead of a carriage. The costumes were amazing and the dancing was brilliant. Buttons and Topsy were my favourite characters because Buttons was a good friend to Cinderella and Topsy was silly and nasty. Fairy Fredbare was kind, like my Nan. It made me feel like I was part of the show and I really enjoyed that. It was so much fun that I want to go again (***** 5 STARS)
Visit our Panto Page