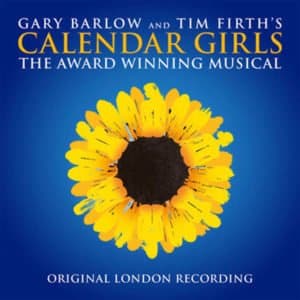 Calendar Girls is truly one of those wonderful stories that comes along once in a blue moon. First presented to the public as a major British film, then as a stage play and now as a musical, I know there were some who asked if it was really necessary to revisit the story again in musical form? The answer is very simply YES!!!!

Staged at London’s Phoenix Theatre last year under the title The Girls, it was recently announced that the musical would undertake a major UK tour but reverting to title Calendar Girls. Thankfully, we now have this wonderful record of the original London cast and it’s everything you could ever have hoped for.

What comes across listening to this recording is that Tim Firth is not only one of our greatest popular playwrights but quite possibly a natural at musical theatre book writing. So many musicals fail because the backbone – the show’s book is substandard but that’s not the case here. It’s great to listen to a cast album where the music, performances, but most importantly the story and emotional intensity come shining through. Combined with Gary Barlow’s pop sensibility you get a score that takes the best of these two talents and has me excited not only to see Calendar Girls again when it returns on tour, but has me anticipating just what musical theatre gems might lie ahead.

Of course, when you have a cast led by Claire Moore and Joanna Riding, you know you are in good hands. As close as we have to British musical theatre royalty, you just need to listen to tracks like Very Nearly Almost, Kilimanjaro and Sunflower to realise just what real musical theatre talent is. Effortlessly plucking at your heart-strings or raising a smile whilst sending your spirits soaring, we need to be seeing more of these two home-grown talents. Oh, and Track 18!

When you add Claire Machin (Cora), Debbie Chazen (Ruth), Michele Dotrice (Jesse), Sophie-Louise Dann (Celia), and Soo Drouet (Brenda), Calendar Girls becomes a veritable garden of theatrical delights. Listen to Sophie-Louise Dann’s vivacious So I’ve Had A Little Work Done or Michele Dotrice’s rousing What Age Expects and you realise that in Calendar Girls you have that perfect storm of great talent and great material.

There are some wonderful moments like Crazy Paving where you realise that performances from Joe Caffery (Rod), and James Gaddas (John) provide understated bedrock for the unfolding drama, whilst Ben Hunter (Danny) and Josh Benson (Tommo) have some great comic moments.

Barlow has provided some great bonus tracks for Yorkshire, Scarborough and Dare, the latter of which could just have been a potential hit for Take That.

I’ve probably listened to this cast album ten times in the short time I’ve had it and whilst I’ve been writing this review and I find myself wondering if this album had come out last year whilst the show was still running whether Calendar Girls or The Girls as it was then might have enjoyed a longer run. I thoroughly enjoyed the show, but having now familiarised myself with this heartfelt score I might have enjoyed several more visits, relaxed and able to soak up the show even more.

Since Calendar Girls, Tim Firth has provided the dramatic glue for The Band with music by Take That and prior Barlow provided the score for Broadway’s Finding Neverland, but I’m intrigued to see what these two come up with next. Their combined strength of dramatic yet melodious musicals needs to be developed. As far as I’m concerned there is plenty of room for more great musicals and Calendar Girls is definitely one of those. Thankfully this cast album captures the magic of this incredible story to perfection.

SEE CALENDAR GIRLS ON TOUR AROUND THE UK