Julian Eaves reviews C-O-N-T-A-C-T, a new immersive show staged outdoors at locations in London which seems to be perfect entertainment in the age of social distancing. 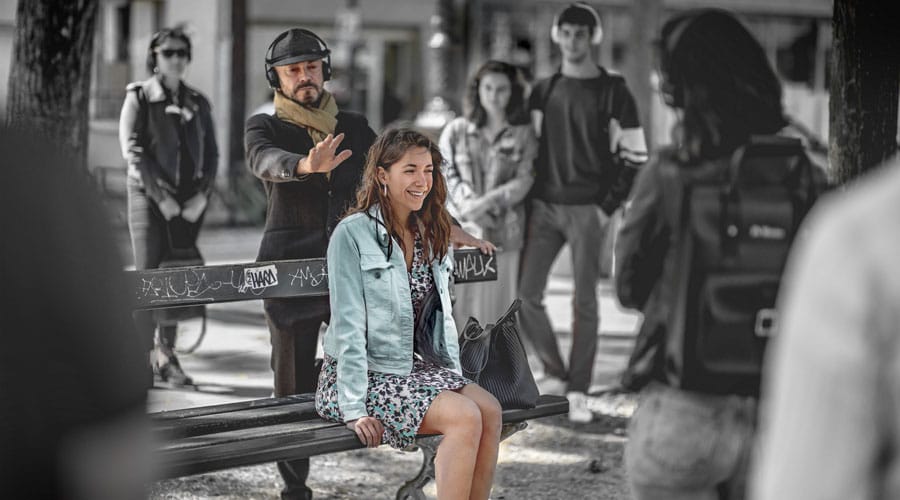 Theatre doesn’t get much more ‘nouvelle vague’ than this.  C-o-n-t-a-c-t is a new French play by Eric Chantelauze based on an original idea by Gabrielle Jourdain given here in a niftily written English-language version by Quentin Bruno, exploring the ins and outs (mostly outs) of ‘l’epoque corona’, in a sliding, cinematic collage of impressions gathered from two characters – ‘the woman’, ‘the man’ – whom we follow in an incredibly packed and rich promenade of 50 minutes.

While they silently move and gesture through the open spaces of the town, we listen in to their thoughts and conversations, and an accompanying, swooshing soundtrack by Cyril Barbessol, through earphones connected to our mobile telephones.  Yes, it’s true: as we always suspected, smartphones really are there to spy on passers-by!  But, in this case, the low snooping reveals a rather glamorous patchwork quilt of philosophical meanders and digressions, elegantly spoken in a pre-recorded soundscape.

Against this, the buzzing, fulminating real environment of London spontaneously and uncontrollably flits and flashes through and around and between and over our doughty players, becoming a never-to-be-repeated part of the remarkable whole.  Thus, each performance is even more than usual a completely unique event.

On Saturday evening I attended in Clapham Common, the park was filled with a great kaleidoscope of metropolitan life, which provided a filmic elaboration of the emotional tribulations of ‘the woman’ and her extraordinary interlocutor, lent additional poignancy by occurring at just that moment of twilight where the day gives way to the night.  Producers Katy Lipson and Mathilde Moulin could scarcely have found a more impressive broadside to fire against the silencing of the world’s theatres than this fascinating, lapidary ‘evenement’, which is either theatre dissolving almost to the point of invisibility into The Crowd, or theatre stamping its mark on the whole world of London, and making it its stage.

The concept and direction of the work stem from Samuel Sene, assisted by Bronagh Lagan.  Their use of the ‘real’ spaces of the park is really masterful, although – of course – entirely dependent on which bits of them happen to be free on the night.  We negotiated a course between countless dozens of other visitors to the common, including skateboarders and barbecuers, picnickers with bottles of wine and dog-walkers: time and again, individuals or groups of the Clapham scene criss-crossed the acting area, resulting in some bizarre and surreal interactions – indeed, for a long while, we all found ourselves being filmed for a podcast feature on local life ‘as it happens’.  I mean, this is the kind of experience that it is not possible to recreate in a closed, controlled building.

Do wrap up warm, though.  The September evenings are drawing in, and being asked to remain fairly stationary for a large part of the hour requires insulation: nevertheless, what joy to find oneself trampling the ‘feuilles mortes’ underfoot as we segued from one little vignette to the next.  In fact, there is a poetic majesty to this living theatre performance that is quite wonderful.  It is possibly transcendental, lifting the soul from out of the everyday concerns that smother it and raising it up to be illuminated and honoured by the spirit of artistic enquiry.  Thus, around us in the park, the statuary and architecture of Clapham’s Pavement and the park’s landscapers ‘became’ part of the ‘set’; even the light thrown down from a single streetlamp upon our two performers seemed so completely apt and right for the moment.  And the conclusion of the piece, so brilliantly handled in this production, makes use of perspective and walks and the falling of the night in a way that tidily rounds off the tale in a manner that is at once elegant without being at all fussy or self-conscious.

There are, moreover, three different locations in which to experience this.  And different companies of actors are seen there.  For the record, we have: Charles Angiama, Louis Bernard, Chloe Gentles, Max Gold, Richard Heap, Aoife Kennan, Katja Quist and Laura White.  I saw Richard Heap and Katja Quist: we were instructed by our ‘handler’ at the meeting point to pursue Katja (playing the role of Sarah), rather like voyeuristic journalists going after a latter-day Alice; meanwhile, Richard sneakily crept in as ‘one of the audience’, before stepping out of our ranks to accost Katja on a park bench in one of the many ‘frisson-rich’ moments in the story.  Their voices balanced each other beautifully, with Katja’s sprightly realism contrasting Richard’s gorgeously resonant baritone.

Only 15 tickets for the ‘audience’ are available at each of the three performances per day; and while the company goes to some lengths to advise us to maintain social distancing, patrons themselves will have to judge whether they think people in the capital’s open spaces are observing anything of the kind.

So, the bottom line is: how does it leave you feeling at the end?  I felt a whole lot better.  And, this may be germane: the day before I had received some particularly distressing news about a dear friend (not corona-related), but by the time I got to the end of this astonishingly expansive 50 minutes, I felt renewed and reinvigorated and ready to take on whatever life had to throw at me.  This is what theatre is all about.