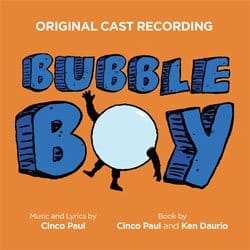 So how do you make an Original Cast Recording without having actually had a full scale production? It’s a question that recently faced Bubble Boy writer Cinco Paul. The answer came from Kurt Deutsch from Ghostlight Records. The result is this wonderful cd of Cinco’s show performed by a dream cast.

The cast of Bubble Boy is made up of actors who have appeared in development readings and a few smaller productions from the past (A J Holmes, Kirsten Scott, Nehal Joshi, Anita Welch and Alex Chester) and actors that Cinco called “new talent that we knew could kill it” (Alice Ripley, Richard Kind, Caroline Bowman, Matt Doyle, Martin Sola and Gerard Canonico).

Recorded after a concert of the show was held at 54 Below in New York, what has been released is one of the most delightful, twisted, and utterly fabulous musical comedies I’ve heard in ages.

Bubble Boy is based on the 2001 movie of the same name with Jake Gyllenhaal. In writing this musical Cinco Paul and Ken Daurio have adapted their own screenplay and proved themselves natural musical theatre writers in the process.

So in a nutshell, Jimmy Livingstone the Bubble Boy is born in Palmdale California without immunities and is confined to a plastic bubble. When Chloe moves in next door, Jimmy is infatuated but as with all romantic comedies she decides to marry wannabe rocker Mark. Determined to stop the wedding Jimmy makes a homemade bubble suit and heads out into the world to stop the wedding. It’s a basic boy meets girl pretext but it’s the people in Jimmy’s orbit that make this show work. So add in the Bright and Shiny Cult, Indian ice cream man Pushpahp and Jimmy’s parents, particularly Mrs Livingston, a musical theatre mother who could teach Mamma Rose a thing or two.

Alice Ripley plays the aforementioned mater-monster Mrs Livingstone. Whether its conjoined twins, mental illness or pure Palmdale nutjob you can rely on the brilliant Alice Ripley to deliver a delectably delicious character. It’s the mark of Alice’s talent that every major foible and prejudice can be heard on a cast recording such as this and with lines like “This world is a cesspool, unwashed and unclean. There’s some filth you can’t fight with lysol and bactine” well, I’m sure you get the picture.

You can’t help but fall in love with A J Holmes the Bubble Boy himself. Like Seymour Krelborn and Ross Geller before him, Jimmy Livingston wants the girl and he will go to extreme lengths to get her. Holmes gives Jimmy warmth and comic innocence that has the listeners onside from the very beginning.

Caroline Bowman’s Chloe is a delight, prepared to settle for the best that she can do, her interactions with Jimmy are pure joy, truthful and comic you can see why Jimmy falls for her.

The small cast on this recording are incredible but special mention must be made of Nehal Joshi’s Pushpahp. It’s an elk is a delectable comic moment, delivered with sensitivity, underplaying the obvious comedy and showing that in this case less is definitely more. What a hoot! Poor man!

Cinco Paul’s score and lyrics are gorgeous. There are 23 numbers on this recording and there’s not a week moment throughout. It’s catchy and i guarrantee these are tunes you’ll find yourself humming after a single listen. Justin Goldner’s fabulous orchestrations are delivered with jaunty panache by Matt Hinkley’s fabulous band.

This is a score which has elements of Menken and Ashman, but you can’t help but hear an undercurrent of Mel Brookes in the mix too. It’s a cast recording of a show that I can’t wait to see. I’m sure I won’t be alone in that feeling once the whole world hears the story of Bubble Boy!

GET A COPY OF BUBBLE BOY

PS. The original film of Bubble Boy passed me by so when I first looked at the title of this musical I immediately thought of the 1976 film Boy In The Platic Bubble that starred John Travolta – wrong, wrong,wrong! I’m attaching the original film trailer to quickly dispell that idea from any others of my age with fond memories of that film.