This is a big, bold and brave production of a bold and brave show: a veritable songfest of surging, soaring, blasting soul ballads and R&B rock numbers that blow you away with a string of A-grade performances from some of the hottest talents in town.  And if you are prepared to take it on that level, then you are going to love seeing and hearing this.

Hiba Elchikhe is the title lead and she is entrancing with a middle-register voice that is a seductive mix of Karen Carpenter and Olivia Newton-John.  She also scales the perilous heights of some fairly terrifying top register belting: hers is a particularly demanding sing, and she alternates in the role with Jodie Beth Meyer, which may take some of the pressure off the technical demands in the very top of the register.  Sabrina Aloueche brings suave West End creds to her parts (the tragic Faith, as well as in the ensemble): she always has a strong dramatic grasp of each song’s narrative.  John Addison is in the cast, too, to warm the auditorium with his strong, round and well-balanced voice as the rogue singer (who appears as an alter-ego for one of the writers) and his ineffable command of the stage. 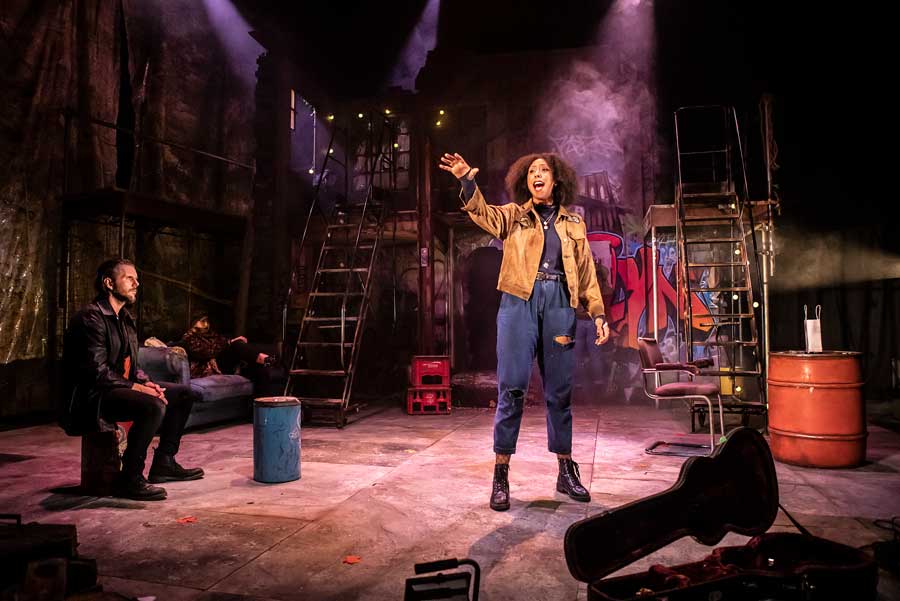 Musically, the star of the show is undoubtedly Emily-Mae, who gets the best material: that is to say, she gets songs to sing that most closely match her character’s trajectory.  Her stellar ‘I am’ song from the second act, ‘Raven’, is just about as good as anything you will hear in any show in the country right now, and in the skilled hands of this performer gets a thoroughly deserved standing ovation from the audience.  Emily-Mae has the vocal chops to master the (often extreme) demands made upon the human voice by these writers, as well as having the dramatic aplomb to put across the person and the story-line she is representing.  The score pushes the women’s voices n particular to their limits.  Ayesha Quigley understudies Aloueche and Emily-Mae. 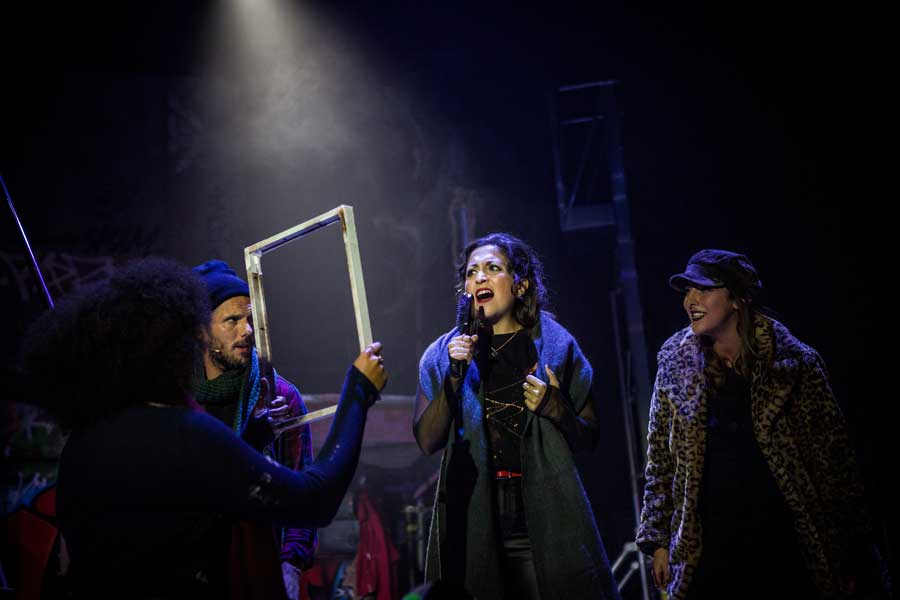 This score, however, somehow represents the zenith of the achievement of the writers: Mark Schoenfeld and Barri McPherson from the USA made their Broadway debut with this show, 16 years ago.  They first met in 1982, when he heard her singing in a cabaret and invited her to record some of his songs.  A decade went by before they met again – also by chance – this time with McPherson taking the lead and inviting a homeless Schoenfeld to come and live with her and her family.  From that point on they began to assemble elements that eventually became this show.  The initial premise is strong and compelling, with a powerful unity and simplicity.  Instead of sticking with that, however, the writers have expanded the ‘plot’ to encompass a collage of other events and personalities, drawn from Schoenfeld’s fascinating life, all of which are strong contenders to have stories in their own right.  Out of these they have created a narrative that gets taken in many different directions, which is interesting, but more of a dramaturgical challenge: it is not always clear where we are supposed to be going with it.

That might not be an insuperable problem: the epic, roaming scale of the drama might work on stage if the design and direction supported that kind of story-telling.  However, will audiences be convinced that this particular production has resolved the essential conflicts in the construction of this work?  First of all, Justin Williams’ set design (Jack Weir lights it all with his customary visual flair) screams ‘RENT’ at you as soon as you look at it, and indeed that show is one of the conscious sources of inspiration for the authors.  It gives us a pretty fixed environment: elaborate and detailed, it is beautiful as an evocation of an urban scene.  Yet, it is arguable about how effectively it allows speedy movement between the multiple locations demanded by the script.

OK.  The script tries to get around that problem by making the cast of five a bunch of strolling players, led by Andrew Patrick-Walker’s fine-voiced narrator, but personally it never felt to me that the script gives the audience enough sense of the ‘reality’ of these people, and their purpose, for them to be taken seriously as guides through the story.  In fact, rather the reverse, the conceit seems always to get in the way of believing in the characters and their lives.  That does not make things easier for the undoubtedly remarkable contributions of the cast, who put every ounce of their being into their performances.  Nonetheless, ‘Superlover’, as an example, is a thunderingly driving and ecstatic number – especially with the band in the hands of the masterful MD, Richard Baker (I believe using John McDaniel’s gorgeously vivid and varied arrangements and orchestrations) – it pulls you along with a throbbing groove that will not be easily forgotten.  And there are many, many other numbers that offer a thrilling, exuberant musical ride.

However, there is also the nature of the direction to consider.  Adam Haigh is a hugely talented and capable director-choreographer: he really can make magic happen.  Here, he chooses to remove dance movement almost entirely from the production, instead opting for a much looser, free-flowing sense of ‘strolling’ movement perhaps trying to fuse dialogue and musical numbers more closely together.  I can appreciate the thinking behind this, and there is a logic to it.  But it remains very much open to question whether this, in fact, helps the audience to focus on what is important, or whether it does sufficient justice to the enormously powerful dance-music feel of the score.  The more I stayed with the show, the more strongly I felt that the whole thing might grab me much more completely, were it freed of the encumbrances of the set and given more clarity in the blocking.

Anyway, as a ‘first show’ from these writers, it is a stonking statement of musical faith and a great ‘concert’ of rock numbers.  As a piece of theatre, it is more problematic.  On opening night, the theatre was packed to capacity; we’ll see how it plays through the run.