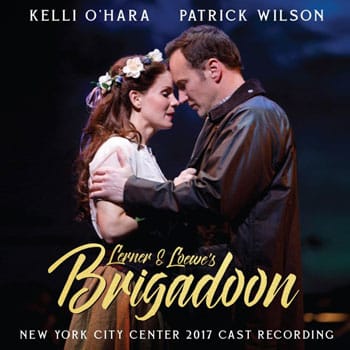 This new recording of Lerner and Loewe’s Brigadoon came as a pre-Christmas suprise, and it’s one that has competed with a nanny called Mary for my time over the past weeks.

Brigadoon was the third collaboration of Frederick Loewe and Alan Jay Lerner, (the first two weren’t memorable) and the show was to prove the launchpad for their latter hits My Fair Lady, Paint Your Wagon, Camelot and Gigi. The story of a magical town in the highlands of Scotland that wakes for one day every hundred years and an American out of place in his own time resonated withn Broadway audiences who made the show the 10th longest running show on Broadway at that time where it ran for 581 performances.

Now, New York City Centre have recorded the cast of their 2017 Encore presentation and it’s truly glorious. Featuring the 27 piece Encores orchestra under the direction of Rob Berman and directed for the stage by Christopher Wheeldon, the score including some of the dance arrangements writen by Loewe himself have been captured. The superb orchestra playing Ted Royal’s original orchestrations show just how these classic Broadway show’s were a perfect fusion of actor and orchestra. So much of the tone of the show comes from the orchestration and no matter how much producers argue, to my mind no electronic equivalent can replace that lush, gorgeous artistry.

Kelli O’Hara plays Fiona MacLaren and Patrick Wilson plays Tommy Albright. You have to wonder if there is a classic Broadway score that O’Hara can’t sing. Her lush vocal on Waitin’ for My Dearie is reason enough for buying this recording. There’s real audio chemistry here with her co-star Wilson, Almost Like Being In Love with its moments of flirtation and giddyness is palpable. If ever there was a pertfect pairing for romantic leads on Broadway this is it! Wilson also takes There But For You Go I and invests it with honesty and integrity with the dialogue break in the song intact.

Stephanie J Block makes every comic moment count as Meg Brockie. The Love Of My Life and My Mother’s Weddin’ Day are perfection. Ross Lekites (Charlie Dalrymple) glorious tenor voice lifts Come To Me Bend To Me up the heavens.

The ensemble on this recording bring the glorious choral arrangements to life. From the Vendor’s Calls beckoning us to MacConnachy Square, to the infectious and boisterous I’ll Go Home With Bonnie Jean and the menace of The Chase, to the show’s end Reprises, they are note perfect throughgout and in the show’s Finale so etherial and ghostly that every hair on my neck stood up.

Following a stunning evening this year with the London Musical Theatre Orchestra rediscovering the score of Camelot, this new recording of Brigadoon has renewed my love of Lerner and Loewe. There is rumour that this recording of Brigadoon might lead to a Broadway revival and if that is the case I’ll be on the first plance across the pond to see it.

BUY A COPY OF BRIGADOON FROM GHOSTLIGHT RECORDS