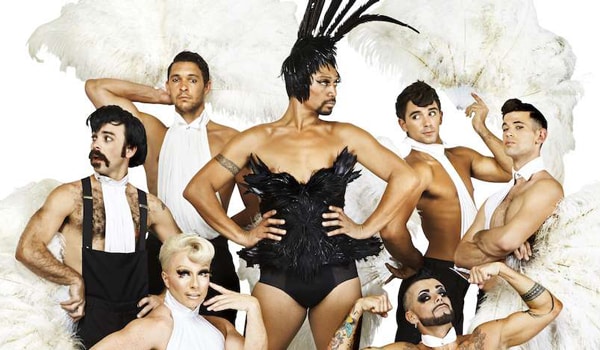 With Gypsy powering on at the Savoy Theatre and Benedict Cumberbatch’s Hamlock creating a furore of its own at the Barbican, London is not starved for event theatre powered by single names on the marquee. But if you are not tempted by either of those, or more likely, can’t get a good seat, then Southbank’s Wonderground has the perfect option for exuberant showmanship, breathless acrobatics, and saucy, risqué Boylesque bravado.

A sextet of very gifted, very bold, very raucous and, let’s face it, wonderfully dirty, performers (aided and abetted by Lucky Charm, a handsome young lad whose objectification is complete and whole hearted) perform a bawdy burlesque which certainly has as its foundation the wisdom of the strippers from Gypsy: You Gotta Have A Gimmick.

Each performer here has a gimmick of their own, be it the gender-fluid acerbic host/hostess, a purportedly naive schoolboy with a penchant for disrobing, yo-yos and Rubix cubes, a hirsute simian persona with an idiosyncratic line in bananas, a high-wire decadence, a gender subverting flair or a line in casual, sexual extreme acrobatics. Against these gimmicks, the objectification of Lucky Charm seems utterly appropriate and the fierce pleasure the troop take in shocking their audience, with words, actions or both, makes those shocks all the more enjoyable. People might have squealed or shrieked or gagged (front row, red dress, fact) but, as in roller coaster rides in theme parks, that was part of the point. 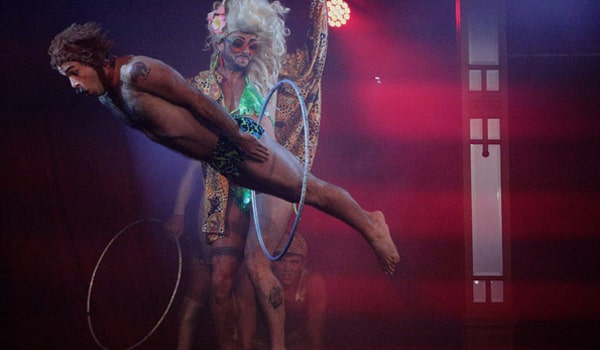 There is much male flesh on display but, except in one fleeting respect, none of it was X-rated. No. This troupe is the natural descendant of Gypsy Rose Lee, tantalising, mesmerising, wilful and wanton, using skill to raise pulses and temperatures, but never playing all their cards.

Importantly, their audience is not Gypsy Rose Lee’s audience. The Southbank Spiegeltent was heaving, but not with middle-aged straight men or cashed up suited and booted lads looking for girl action. No. The crowd was much more eclectic, with women and young couples in predominance. These were people who were up for anything and hoped they got it. When they did, they were genuinely pleased. Ecstatic in some cases. Shocked and scared, perhaps, too.

Of course, what is really shocking about Briefs is also it’s killer point: if the same routines were performed by women, it would not be regarded as controversial. By wearing the skimpy, form revealing outfits that have been de rigeur in Burlesque from the beginning, and by promising to remove garments if the demand is loud and enthusiastic, the males in this performing troupe thumb their collective noses and other protuberances at the norms of the patriarchal society with glee.

This gender, race and sexual politics canvas stretches across the entire platform of the performances, from the sharp opening patter of Fez Fa’anana which happily offends everyone equally, through the “pretty doesn’t mean dumb” antics of the cheeky Louis Briggs and the vignettes with an increasingly more naked Lucky Charm (Lachy Shelley) to the various satirical and ironic numbers involving the remarkable Dallas Dellaforce, whose take on gender roles in society is razor sharp and strikingly bold.

For something that revels in unashamed, and sometimes grotesque, eccentricity and the laughter that comes with shock and awe, Briefs has a deal to say about modern life, values and prejudices. You just have to know where to look to find it.

Because of the nature of the material, no favours would be done by describing in too much detail the content of the various acts and routines. Suffice to say that there is not a dull moment in the 80 minute programme; time zips by as expert physicality and frisky showmanship permits the virile and exuberant troupe to strut their stuff. 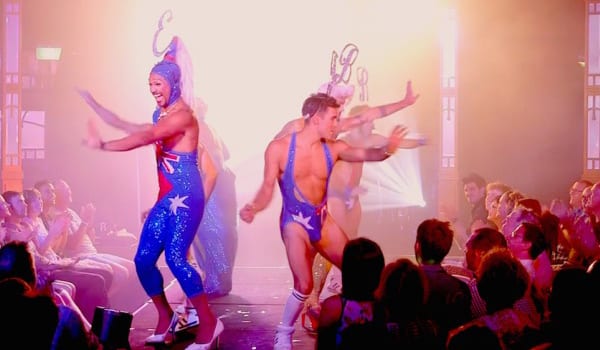 Mark “Captain Kidd” Winmill, Evil Hate Monkey and Thomas Worrell complete the Briefs entourage, and they are involved in the most extreme physical acts. Each is a world standard athlete and, like their colleagues, each has won awards in the international Burlesque world. The standard of ability here is quite breathtaking.

As a great night out, which will raise eyebrows and laughs in equal measure, but which will also leave you thinking (should you care to do so), Briefs is an unquestionable triumph. Go!

But, bear these suggestions in mind:

2. Wear clothing that copes with spillage.

3. In this show, Audience Participation is not about clapping along.

4. Walking your dog will never be the same afterwards.

5. If you need a pacemaker, the front row is not for you.

9. Drink beforehand and during, but not to excess. You need your wits about you.

10. Don’t trust the cast. They live to lead you astray.

Briefs runs at the London Wonderground until 27 September 2015