There is something memorable about Vivienne Franzmann’s new play Bodies. It sticks with you and lurks ominously at the back of your mind after leaving the theatre, but not altogether in a good way.

Bodies tells the story of Clem (Justine Mitchell) and Josh (Jonathan McGuinness, admirably standing in for an ill Brian Ferguson), a couple so desperate to have a baby that they’ve travelled all the way to India to enlist the services of a surrogacy clinic. At the same time, Clem is preoccupied with organising care for her ailing father David (Philip Goldacre), who is suffering from motor neurone disease.

For Clem, this surrogacy is a last resort. She’s been pregnant before, but none of them have lasted full term. There’s a sense of desperation to her plight, not least demonstrated by her willingness to go halfway around the world to get what she wants. As the play goes on, we learn that’s not all she’s willing to do.

Things start promisingly. Gabriella Slade’s set is modern and clean, all bare wood and glass. A set of sliding doors enables characters to almost seal off areas of their lives that they don’t want to deal with, or take down barriers as they wish. There’s a sense of barrenness to the set, juxtaposed with a circular projection screen set on one wall, which suggests something of a womb. We get a few choice images displayed on it, but by and large it’s a little unnecessary.

There are some good scenes early on that demonstrate the strength of Clem and husband Josh’s relationship in that easy, unforced way that successful long term couples possess. But then we get into the issue of their childlessness, and there we unfortunately stay.

There’s potential for some kind of pity for Clem, but medical issues aside, she’s often the architect of her own unhappiness. She talks, at length, about how unfulfilled she is as a woman without a child, which is a problematic school of thought in its own right as it suggests that a woman’s only function in life is to reproduce. There is a lot of heavy-handed metaphor, from weather to the birds, and the dialogue lapses frequently into overly flowery prose, particularly in the parts of the play where we catch a glimpse into Clem’s own neurosis. 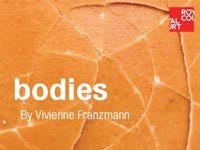 Clem also develops a complex over the baby being formed from her husband’s sperm but someone else’s egg, and agonises over the fact that the baby is not ‘hers’. Children, or indeed the lack of, is a topic that comes up in many women’s lives and Bodies seems to be intent on invalidating any other choice than having your own, naturally, without any outside help. There’s no consideration or empathy here for adoptive parents, those who cannot have children, or those who do not want children. Clem, and to an extent Bodies, do not consider them.

When the dark truth is revealed about their surrogate’s poor quality of life, Clem’s so obsessed with her future child that she doesn’t really appear to care, undermining Bodies main theme of the human cost of surrogacy. Her main focus is her child, this child that will apparently complete her – her father, husband, friends and the surrogate can all be collateral damage as far as she’s concerned.

The surrogate, Lakshmi (a massively under-utilised Salma Hoque), is all too often reduced to set dressing, and gets practically no definition as a character outside her role as mother, wife and functional womb. Once Clem gets her daughter (played with well-pitched adolescent pretension by Hannah Rae), will she devolve in a similar way? Will she lose her identity as ‘Clem’ and become solely defined by her motherhood? With the lingering anxiety that her daughter is not ‘properly’ hers, you wonder if she’ll ever really be satisfied. As a result, Franzmann has created a character so utterly and unpleasantly self-absorbed that after a while it’s difficult to feel any sort of sympathy for Clem whatsoever.

Bestowed with such a thankless task, Justine Mitchell gives a convincing portrayal of a desperate Clem and her scenes set in reality are well acted. Lorna Brown provides much needed relief and common sense as David’s new carer Oni, and once again, praise must go to Jonathan McGuinness, standing in as Josh. Despite having his script in hand, he injects a great deal of expression and personality into the role, and has excellent chemistry with the rest of the cast.

Ultimately we are left wanting a little more from all these characters. What Bodies seems to have forgotten until the last scene is that surrogacy doesn’t just affect the woman who wants the baby – it affects everyone around them, as well as the surrogate herself. A little more exploration of this would have been a great benefit to the piece and more thoroughly demonstrated the negative effects of this global transaction.

Dominated and ultimately hindered by its unfortunate subtext, Bodies leaves its audience feeling uneasy for all the wrong reasons.