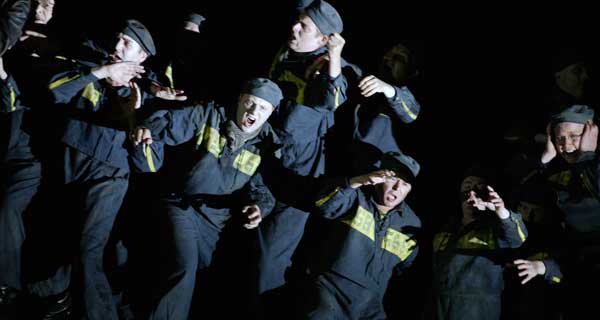 There are many ways to play Billy Budd as a character and many ways to interpret the text, but it seems unlikely that Herman Melville would have ever imagined that his unfinished masterpiece would end up in the shape and form that Seb Harcombe presses upon it in his adaptation (which he also directs) at the Southwark Playhouse.

And yet, Harcombe’s production is more about those things than anything else. It’s more Billy Crudd than Billy Budd – chiefly because, inexplicably, the good-looking charismatic Charlie Archer, who plays Billy, is made to assume the habiliments of grime, physical and mental incapacity and slovenliness despite the text’s constant reminder of his natural beauty and charm.

It is as incomprehensible a directorial choice as is ever likely to be encountered and with that single stroke, Harcombe robs the narrative of its innate focus and purpose. It is only because Archer is an actor of considerable skill that anything remains of the Melville notions.

But the decision to present Billy in that way has other consequences : for a start, it places Gerrard McArthur’s Claggart in a fairly impossible situation – without the beauty, what is there for him to be obsessed by?

McArthur deals with this in the cleverest way possible, making Claggart unhinged and volatile and devious, but there is no doubt that a much better performance could have been his had the director not handcuffed him by removing his central motivating force. Indeed, the best, most powerful scene in the production occurs when Claggart enters Billy’s bunk room and slowly strips his naked sleeping form of his covering sheet – whether the motivation is unfulfilled lust or violence remains tantalisingly unclear. McArthur follows this up with a simply mesmerising and highly poetical soliloquy which is tense, haunting and perfectly delivered. This moment makes entirely clear the powerful performance that the audience is denied.

Also against the odds, there is excellent work from Ian Batchelor who plays the sailor Jenkins, friend and protector of Billy and enemy of Claggart, and Joel Gorf who is excellent as the sailor Pavel, who subverts his own interest in Billy to act as another of his guardians.

In the enormously complicated role of Captain Vere, Luke Courtier is miscast (too young given Claggart’s age) and although he well captures the sense of class and entitlement critical to Vere’s psychology, the direction denies him all of the other textures and layers which ought to be on show. No one, including Vere, understands why he seals Billy’s fate. (It is quite hard to understand why Batchelor did not play Vere actually)

Horcombe mistakes shouting and thumping metal for resonance of thought – and this affects the entire cast. Sadly, Nikolai Hart-Hansen provides an effective and moody design which would be perfect for a claustrophobic production of Melville’s work. In Horcombe’s hands though, the play resembles nothing more than an ill-thought through performance piece which allows each actor, in turn, to have their moment and show (or not show in the case of two of the cast) what they are capable of (including singing and dancing) but there is scant regard for the work as a whole or the overall themes and concepts.

A wasted opportunity, especially given the presence of Archer and McArthur.