Mark Ludmon reviews Bible John presented by These Girls as part of the Vault Festival 2020 at The Vaults in London. 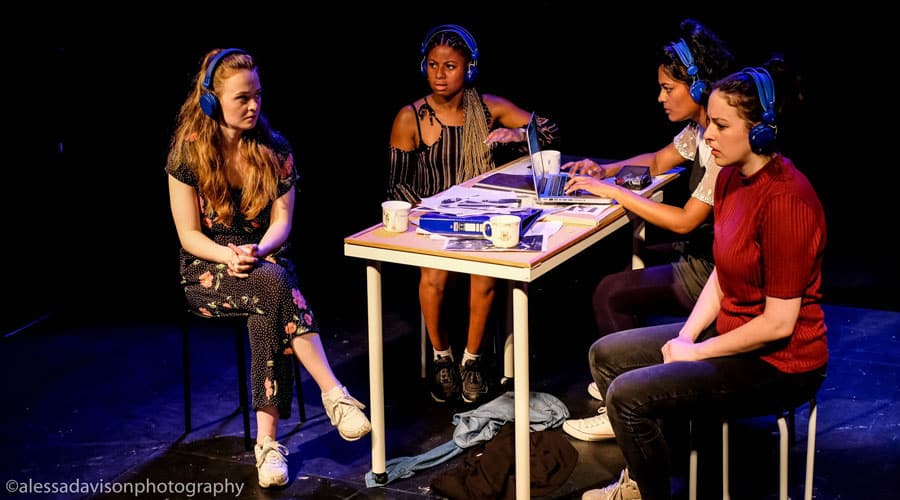 Only last week, women’s magazine Marie Claire published its top “39 True Crime Podcasts We’ve Been Hooked On This Year”. With titles like “Your Own Backyard” and “Man in the Window”, they promise gripping entertainment by bringing to life grisly murders, many unsolved. Some such as “Killer Queens” and “Sinisterhood” are hosted by women, reflecting the perhaps surprising fact that these horrific stories, mostly of male violence against women, have so many female fans. Theatre company These Girls brilliantly explore this phenomenon in their show, Bible John, dissecting the podcasts’ appeal and exposing wider questions about turning death into entertainment.

The show itself draws on a real-life unsolved crime, the murder of three women in Glasgow in the late 1960s by a serial killer nicknamed Bible John who found his victims in a dance hall. The case is picked apart in a podcast by a (fictional) female American journalist which we see eagerly consumed over eight weeks by four women who work together as temps in an office in England. We follow their journey as they become obsessed with trying to identify the killer, going as far as learning 1960s-style dancing to understand what his victims experienced. 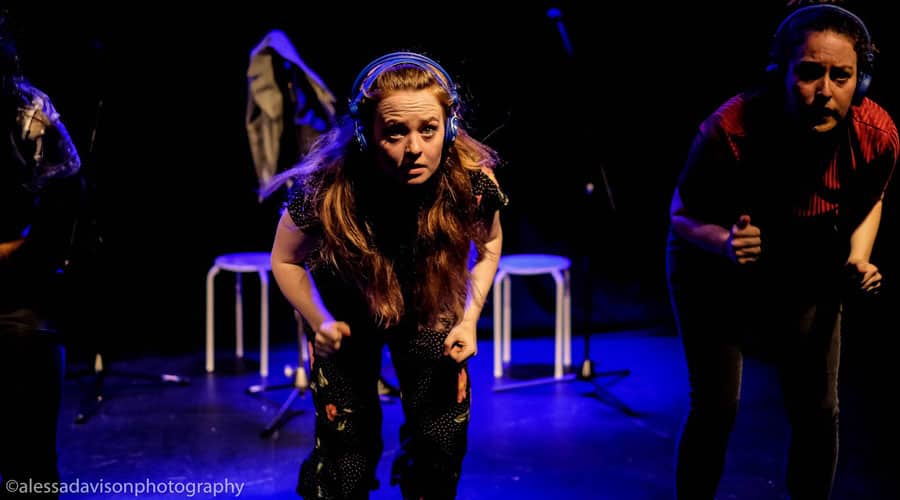 The case is genuinely intriguing, and the theatre show itself is entertaining, with plenty of comedy from seeing these four office workers turn detective. But the piece cleverly exposes the problems with gaining pleasure from the violent murders of real people. In a similar way to Hallie Rubenhold’s book The Five: The Untold Lives of the Women Killed By Jack the Ripper, it challenges how the three women in the Bible John case have become only “victims”, losing not just their lives but their identities to the killer’s story.

Often speaking directly to the audience, the four modern-day women talk about what draws them to the podcasts: some find the shared experience “cathartic” and “empowering”, some find it a strange form of escapism. Others talk of it being a way for women to understand men so they can protect themselves. Most prevalent, and alarming, is how the podcasts contribute to an “aura of fear”, an ever-present, underlying anxiety about the threat of male violence.

With a growing sense of anger and frustration, the show is performed by the writer, Caitlin McEwan, alongside Renee Bailey, Carla Garratt and Louise Waller with a taut precision under director Lizzie Manwaring. On a stage stripped back to office chairs and a screen, the show has a raw directness and intimacy that makes the anger infectious, emphasised through the work of movement director Laurie Ogden. Like many of the true-crime podcasts, Bible John is uncomfortably entertaining but erupts into fury at the endless and unsolved story of male violence against women.

Running at Vault Festival to 16 February 2020