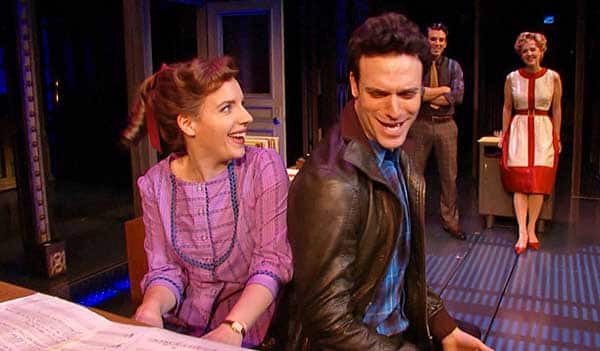 There is a marvellous moment in Buddy, the musical based on the life of Buddy Holly, where he and a colleague are creating a riff which turns into the hit song Everyday; it is a thrilling, theatrical moment based on music. The glorious Jersey Boys had a similar moment when the vamp for Can’t Take My Eyes Off You was played for ages while the band hunted for a financial backer for it and the audience wondered what it was. Beautiful: The Carole King Musical has a similar magical musical moment leading up to the extraordinary A Natural Woman.

It caps off a series of magical musical moments in a delightful show brimming with joy and life – and music.

It’s now playing at the Stephen Sondheim Theatre on Broadway, where it officially opened on 12 January 2014, and is soon to arrive in London. For a show that has been running for a year, it is in tight, taut and terrific shape. Not a single person is dragging the chain; everyone is entirely immersed in the work and everyone can sing the music properly. It is an absolute pleasure from start to finish.

Juke Box musicals are often derided, sometimes rightly so. It is, however, difficult to see this as just a Juke Box musical; it tells the life story of Carole King who was/is a prolific and generation defining songwriter. Her songs, while hits in their own right, are the backbone here and they are not included because they are great songs – they are included because they are the right great songs for the narrative. Nothing jars; everything works with a synchronicity that some musicals with original scores can only dream about.

The story charts the professional life of Carole King – her writing partnership with Gerry Goffin, the ups and downs of her work with music publisher and producer Don Kirshner, and her friendship with the rival writing team of Cynthia Weil and Barry Mann, whose songs also feature. Along the way the audience glimpses her success with phenomenal performers such as The Drifters, The Shirelles, Neil Sedaka, Little Eva and The Righteous Brothers.

Her marriage to Goffin and his betrayal of her, their divorce and the aftermath of that contribute to the heart of the piece. And everything leads to the moment when she realises and accepts that she is good enough to perform her own music herself – and the sense of the legendary Carnegie Hall Concert where she performed as a soloist is breath-takingly recreated.

The piece is directed with style and sensitivity by Marc Bruni and there is unflagging energy throughout. It moves at a cracking pace; one of those nights in the theatre when you wish it would just go on and on. Derek McLane’s clever set evokes the period well and allows the action to flow smoothly without any notion of uncertainty about time and place. Alejo Vietti’s costumes are period perfect and colourful and fun and Peter Kaczorowski lights everything perfectly. It’s a production where all the elements work precisely right.

Jessie Mueller is remarkable as Carole King. Just remarkable. She manages to transform her physical self so that she is Carole King – not by make-up or prosthetics, just by her sheer skill. Her voice, the way she walked, her stance – everything she did evoked the sense of Carole King as she is known from music videos and broadcasts.

Utterly believable in every respect, Mueller also has an extraordinary voice and that rare ability to transform her voice into someone else’s; vowel sounds, pitch and timbre – all modified from her normal voice to create the sound that is unique to Carole King. It’s just an extraordinary transformation – a brilliant, insightful and heart-breaking performance full of subtlety and strength.

She has excellent support.

Scott J Campbell, tall, with matinee idol looks and a wandering eye, is perfect as King’s husband and lyricist, Gerry Goffin. It’s a hard role to make work because Goffin nearly destroys King when he betrays her, yet Campbell manages to imbue the character with enough sense, heart and understanding that he is not a pantomime villain. He has a great voice too and was especially good in Take Good Care Of My Baby.

The other writing team is superbly realised by Anika Larsen and Jarrod Spector. They are funny and vibrant – and provide a real counterpoint to the story of King and Goffin. They both are vocally assured and each is a master in comic timing. They are an absolute joy to watch and hear. Especially good is the sense they bring of the friendly rivalry between the writing partnerships – it is impossible not to understand the dynamics at work in this small cell of extraordinary music writing activity, mainly because Larsen and Spector work so well together and with Mueller and Campbell.

Paul Anthony Stewart is terrific as the music mogul who controls all of their fates, and he is adept at showing both the business side of his character and the genuine affection he has for the four central artists on his payroll.

There are so many extraordinary moments of undiluted musical pleasure: Oh Carol, Happy Days Are Here Again, Will You Still Love Me Tomorrow, The Locomotion, You’ve Lost That Loving Feeling, Walking In The Rain, It’s Too Late and, of course, the title song – Beautiful. This is theatrical musicality at its most beguiling.

The kind of show 5 stars were made for.

Book tickets for Beautiful on Broadway

Find out More about Beautiful In London