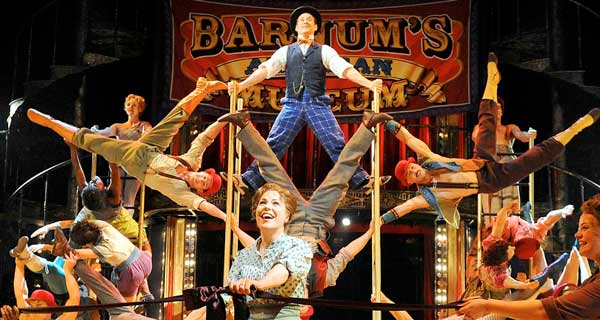 Barnum
Chichester Festival Theatre, soon to be on tour in the UK
24 August 2013
5 Stars

The Timothy Sheader/Liam Steel helmed revival of Barnum, now playing its last week at Chichester in a custom built tent, is a triumph – in almost every way.

The idea of refocusing the book so that the show deals with Barnum’s extraordinary life prior to joining the circus is inspired and gives everyone a sensible foundation for great performances. Scott Pask provides a wonderfully colourful and imaginative set which shows off Paul Wills’ genius costumes admirably.

Heading the pretty amazing cast is Christopher Fitzgerald, who eschews the razzmatazz showman approach favoured by Michael Crawford and Jim Dale originally and, instead, in a quite inspired way, focuses on the humbugging that epitomised Barnum’s life prior to the circus. Fitzgerald is winning from the off, but over the course of the production, he provides a layered and thoughtful performance full of joy, light, insight, charm, manic energy and tireless ebullience. He is a joy to watch at all times, sings well, walks the tightrope with aplomb and juggles, literally, all the balls that Barnum has to keep in the air for the part to work.

His Museum Song is an unqualified triumph. It is difficult to imagine anyone working in the West End who could possibly be better than Fitzgerald in this role in this clever, sensitive production.

He is more than helped by a pitch-perfect turn from the glorious Tamsin Carroll, whose Charity Barnum is resolute, fun, determined, whimsical and utterly, completely delightful. She handles One Brick At A Time with consummate ease and the gorgeous I Like Your Style has never sounded better than it does here. Together, Fitzgerald and Carroll provide as realistic a portrait of this couple as could be imagined.

Also pitch-perfect is Anna O’Byrne as Jenny Lind – not only does she sing breathtakingly well, but her beauty dazzles and entrances and she has a deft hand for comedy too. It is quite easy to see why Barnum thinks about leaving his perfect wife for this magnificent Swedish Nightingale.

Jack North is an endearing and vital Tom Thumb, James O’Connell is fabulous as Bailey and there is wonderful work from the ensemble generally, but especially A C Garcia, Leon Cooke, Michaela O’Connor and Max Parker. Thank God I’m Old was the only number that did not hit a home run, and that was more about the need for a slightly older, more thrilling belt from the soloist.

Overall, though, the score receives excellent care and there are many vocal delights. There is excellent choreography from Liam Steel and Andrew Wright and the routines in Black and White, Come Follow The Band and Join the Circus are especially marvellous.

What is not good, however, are the orchestrations (which are too muted, too woolly and are not sufficiently brash, brassy and percussive to drive the tempi and support the singers and the dancing as they should be supported) and the sound system (which is erratic and in some places utterly inadequate – Come Follow The Band suffered particularly from the poor mix between vocal line and band).

These issues might have been better in a traditional proscenium arch theatre, but given that some numbers ( such as Black and White ) had good balance, there seemed no excuse for them at all. With proper orchestrations and a sound design that brought home the bacon , this production would be that rare treat – a re-imagining that could put the original in the shade.

For the cast here is truly excellent, brimming with zest and energy and their cohesion, style and acrobatic dexterity makes them simply joyful to watch. Make no mistake – this is a way better revival than Chichester’s recent productions of Sweeney Todd, Top Hat or Singing in the Rain. It’s braver, bolder and more original – and it has a near faultless cast who repeatedly do the near impossible.

Doubtless, the show has improved since it opened, but, even so, it is difficult, seeing this great company produce such fine work, to fathom how this production could possibly have garnered the caustic, withering reviews it did. On the basis of tonight, it is a five star hit, which should transfer to the Palladium and play for a long time.