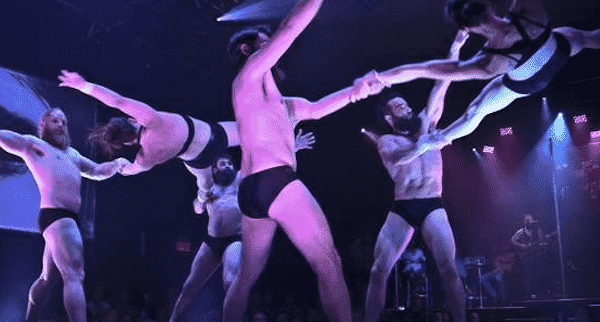 Firstly, I would just like to say, if you are a London Wonderground virgin, you are missing out! I would urge anyone who has not sampled the joyous nights (or, indeed days, should you choose a matinee) on London’s Southbank to race down there and partake in its delights. Get your tickets booked, get there early, enjoy a drink there, grab a bite to eat at one of the food stalls, and enjoy some unadulterated fun. There is no finer way, in my humble opinion, to enjoy a London summer’s evening than in this location – and irrespective of the actual weather, there is a pervading and inherent sunny disposition in the air. It instantly makes me reminiscent of summer nights spent at Edinburgh Festival Fringe – helped by the presence of the Giant Purple Cow that dominates the skyline – as everyone loosens their proverbial collars and ties, rolls up their sleeves and indulges in an evening’s entertainment.

Tonight’s show did not take place in the Purple Cow, however, this time it was off to the Spiegeltent – a venue just next door housing many of the London Wondergrounds acts. The Spiegeltent is a temporary structure erected each year specifically for the season. It has a wonderful quirky charm about it, with the slight feel of being at a dilapidated circus tent – but it could not be more welcoming! With a large bar outside, and seating directly outside it in the form of mock-up dodgems, the bustling atmosphere begins before you have even taken your seat. The acts here are frequently loud, bawdy and energetic – comedy acts too frequently dominate the programme. This is not the kind of “art” to stand on ceremony with; instead it is time to get dirty and get involved – drinking is actively encouraged. 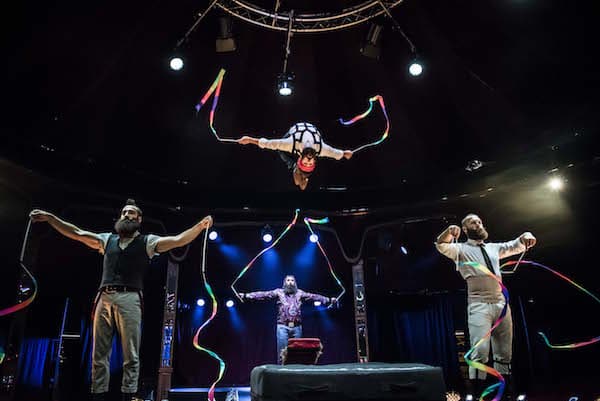 Tonight, it was BARBU, brought to us by Cirque Alfonse (a Canadian Circus Troupe from Quebec), and it is an adrenaline fuelled, tongue-firmly-in-cheek, noisy, joyous, sexy, quirky romp from beginning to end. BARBU is described as Electro Trad Cabaret, and in that it wonderfully categorises the genre. The show is accompanied by live music throughout, with four musicians filling the venue with an infectious swell of Folk-Electric fusion that instantly gets the adrenaline coursing through your veins before the gravity defying acts even commence. The music is integral to the show and builds for the duration – never missing a beat – in perfect harmony with the unfolding action.

Alain Francoeur, BARBU’s Director, says, “ BARBU is all about exploring the circus, looking back at what it was in the past and seeing what it has become today. The essence of the circus remains the same; it fulfills a need to witness things that are larger than life…”, and it certainly does deliver on that promise. From the moment the company burst onto this stage attired in checked shirts, whirling round the stage on roller-skates the atmosphere is charged, and, as an audience, you cannot help but be drawn in. As the show progresses the action gets larger and more daring with the foot firmly on the accelerator. Clothes are gradually stripped until these burly men are clad in nothing but their tiny pants and massive beards – and what impressive beards they are!! There is a moment where the men, whilst on roller-skates, even pull each other around the stage by their facial hair. There is a playfulness and cheekiness woven in to the very fabric of this piece, and because of that, it is very hard not to warm to them immensely! As the danger of the piece mounts, it never for a moment relinquishes its playful nature. The sense of complicity in this ensemble is in itself a feat to behold – and what is more, they appear to be having an incredible time doing it. Such level of fun is truly affecting. One of the highlights is one of the women being swung so close to the ground at great pace – so close, in fact, that she can light a match that she is holding in her mouth from the floor.

In addition to the roller-skates, there are incredible feats of strength, balance, acrobatics, pole dancing, and clowning – something that is intrinsic to the piece as a whole from every single performer, and then in its purer form embodied by Lucas Jolly, the mentalist-cum-magician. The speed and deftness of the transitions between scenes happens with great flow leaving the audience continually guessing and begging for more – included a number of moments that leave the audience collectively holding their breath.

To return to a quote from the Director, Francoeur, not only insists, “[Circus] … fulfills a need to witness things that are larger than life…” – moreover, “[Circus helps] … us escape from life’s realities.” It is a perfect way to lose yourself for an evening. Strange, curious, sexy, quirky and an enormous amount of fun. There is even an opportunity to buy shots and partake in a cheeky raffle. So what are you waiting for? Book your tickets now. This is essential viewing this Summer.

BOOK TICKETS FOR BARBU AT LONDON WONDERGROUND UNTIL 25 SEPTEMBER 2016